With just ten days to go before the Nationals' season opener in New York's Citi Field, 26-year-old reliever Aaron Barrett remains in the mix for the final spot in the bullpen. "He's one of the guys that we're certainly keeping a close eye on and looking at," Matt Williams said Wednesday.

Share All sharing options for: Nationals' Reliever Aaron Barrett Still In Mix For Final Spot In The Nats' Bullpen

In seven appearances so far this spring in Grapefruit League action, 26-year-old, 6'4'' Washington Nationals' right-hander Aaron Barrett has allowed just four hits in eight scoreless innings of work in which the Evansville, Indiana-born 2010 Nationals' 9th Round pick out of the University of Mississippi has walked no one and struck out seven while holding opposing hitters to a .148 AVG. He's also managed to avoid getting optioned out to one of the Nationals' affiliates and with just ten days to go before Opening Day, he's being discussed as a serious candidate for a role in the 2014 bullpen.

"Every situation we've put him into he's performed and that's all we can ask," Williams continued. "He's been aggressive. He's commanded the strike zone and had quick innings, worked well. So, it's all good."

The Nationals added Barrett to the 40-Man Roster this winter, noting in a press release on the move made to protect him from selection in the Rule 5 Draft, that his 26 saves last season, "...ranked second in both the [Double-A] Eastern League and Washington's system."

Barrett pitched for Matt Williams when both were in the Arizona Fall League in 2012, in Williams' only managing gig before getting the job on the bench in the nation's capital. Williams talked early this spring about the right-hander being a different pitcher this spring than the one he saw in the AFL.

"It was certainly at the end of the season," Williams said.

Barrett had just finished a season in which he threw a career-high 51 2/3 innings between Low and High-A.

"Gone through a full season," Williams explained. "And that time of year, you certainly don't feel like you feel right now. But it's really good. Hard sink certainly to his arm side. Good slider. It's more of what I saw in the Fall League, I think it's a tick up though. He's racheted it up from where I saw him last."

Williams said he was impressed not only with Barrett's velocity, but the movement he was getting early this spring.

"From what I know of him he wants to go to his slider, because that's a really good pitch. We're encouraging him to pitch more with his fastball and use his sinker..." - Matt Williams on what he's seen from Aaron Barrett

"It's got to be low-to-mid [90s]," he said, talking about Barrett's fastball. "And the ball is moving. Which is good. From what I know of him, again, it's a small sample size, six weeks, but from what I know of him he wants to go to his slider, because that's a really good pitch. We're encouraging him to pitch more with his fastball and use his sinker effectively and he's shown us that."

Three weeks and several rounds of cuts later, Barrett's still in the mix for one of the final spots in the Nationals' bullpen. With Ross Detwiler transitioning to relief work, there's likely only one spot left and a number of pitchers competing for it. Christian Garcia and Ross Ohlendorf were optioned to Triple-A on Thursday and veteran reliever Manny Delcarmen was reassigned to minor league camp. Matt Williams also said yesterday that Ryan Mattheus, who has been slowed by a rib injury this spring, likely won't have enough work in to be ready for Opening Day.

That leaves Barrett and Blake Treinen and left-handers Xavier Cedeno and Mike Gonzalez battling for the final spot in the bullpen, though Tanner Roark might be in the mix as well if he loses out to Taylor Jordan in the battle for the fifth spot in the Nats' rotation. Williams said Wednesday that Barrett is getting serious consideration.

"He's one of the guys that we're certainly keeping a close eye on and looking at," Williams told reporters. 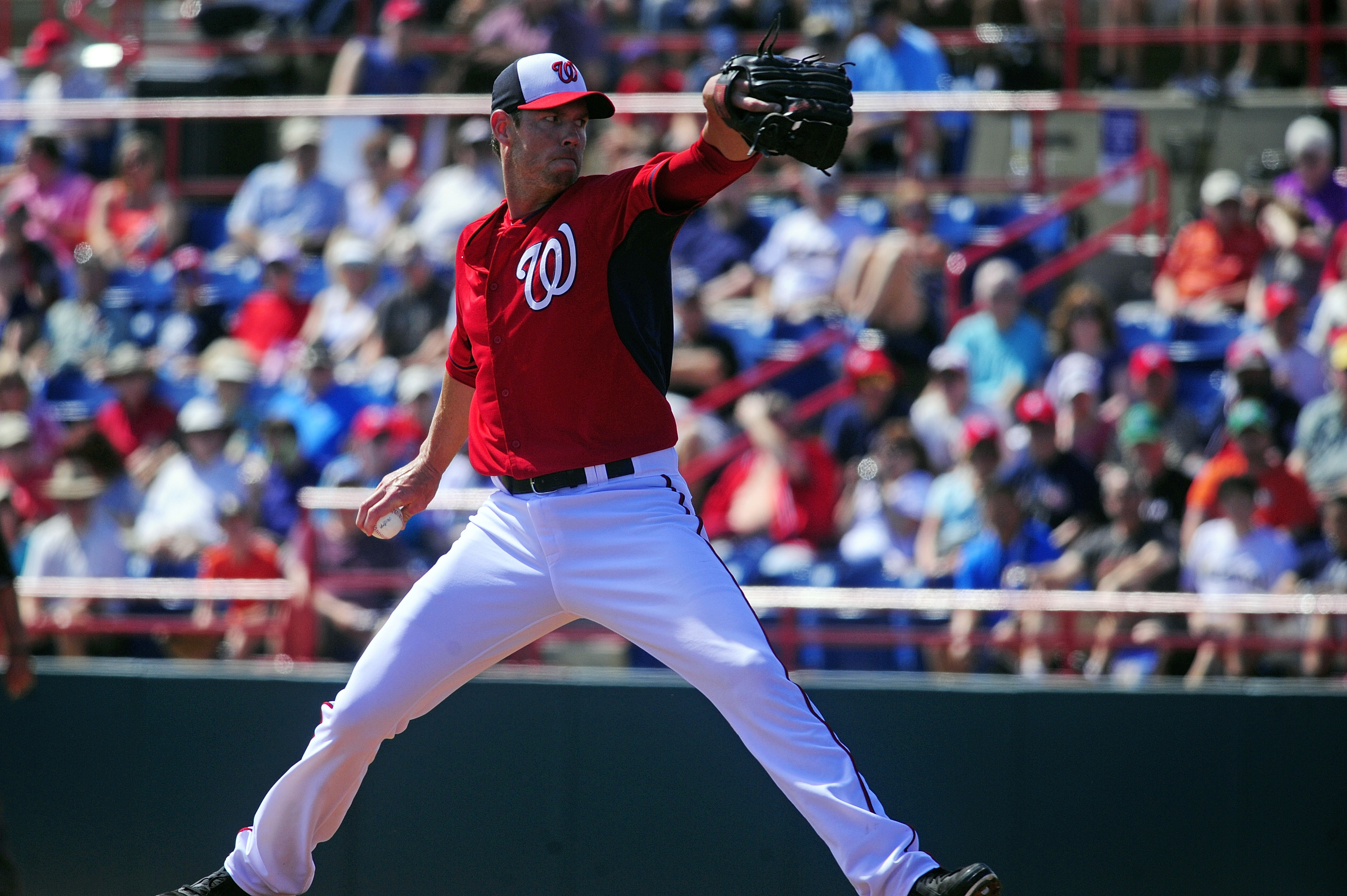 Does being on the 40-Man roster give Barrett an edge over the likes of Blake Treinen if it's down to the two right-handers?

Will the Nationals just go with Taylor Jordan in the rotation and Tanner Roark in the pen?

Or go with three lefties?

Can Barrett outlast the competition for the final spot?