How do the N.L. East shortstops stack up? There's clear talent at the top, while younger players at the bottom have significant flaws. Like many of the positions we've seen so far, the Nats and Braves are near the top.

We bumped the normal Friday rankings article in favor of Opening Day Spring Training coverage for the Nats, so here's an overdue look at the N.L. East shortstop crop. If you missed it, check back at our rankings for all of the outfield positions in the division. As for this position? We again have a battle between the Atlanta Braves and the Nationals at the top.

Adeiny Hechavarria was acquired before last season from the Toronto Blue Jays in the EVERYTHING MUST GO!!! Miami Marlins fire sale of late 2012. He....didn't play well.

First the good.  Hechavarria, according to the Marlins, is actually better with the glove than metrics give him credit for. You see, Hechavarria's low defensive ratings owe to his ability to go to his right. This is because, unlike other shortstops, he does not cheat towards the hole between his position and third base. Being out of position = getting to fewer batted balls = a lower defensive rating.

But the 24 year old was very good going to his left, and prospect sage John Sickels noted before last season that Hechavarria's "glove will keep him employed for a long time." Sickels later cautioned, "[d]on't expect much hitting in the short run, but he's not helpless and he could hit better than we currently expect as he gets into his late 20s."

Hopefully, the Marlins weren't counting on any offense last season. Hechavarria's offensive value was the lowest among all qualified big leaguers in 2013. It's still better than I could ever hope to perform, but the fact is that the Cuban is simply terrible with the lumber. The Fans see a pretty big improvement in 2014, which I suppose is possible -- but there's just nothing there.

Perhaps, as Sickels projected, Hechavarria will mature into a not-far-below-average bat and create enough value with his glove to positively impact the Marlins' future. For 2014, Hechavarria places as the fifth best shortstop in the division.

Fortunately for Ruben Tejada, he plays in the same division as Hechavarria.

Tejada was doubtlessly hampered by a .228 BABIP, although he did have the lowest line drive rate of his career in 2013. He also possesses very little pop. While that's not unusual among shortstops league-wide, it's one less avenue for the righty to create value. And he walks at a below-average rate, too.  It's easy to understand, then, why he sports an 81 wRC+ in nearly 1,400 career at bats.

Defensively, Tejada's just a guy -- especially considering the other talent on this list. Scouting reports on his glove aren't the most glowing either. Here again, another avenue for him to create value is largely closed. Notice a theme?

Like every other major leaguer, apparently Tejada came to camp in great shape this spring, per Newsday

He spent eight weeks of his winter at a Michigan conditioning camp, where he slimmed down so he could re-establish himself as the Mets' shortstop. Upon his arrival at spring training, he has drawn praise from the same voices that had once criticized his work ethic.

But did he? The New York Post reports that

Even though Tejada attended an offseason strength/conditioning and nutrition camp in Michigan, Mets management has not been overwhelmed by the shortstop’s "new’’ body.

"He looks pretty much the same,’’ one source told The Post on Monday.

Frustrated with Tejada, the Mets still have a strong interest in signing free-agent shortstop Stephen Drew, two sources have told The Post. They also have shown interest in Seattle’s Nick Franklin.

Add it all up, and the Mets' interest in Stephen Drew appears justified. Still, Tejada wasn't as bad with the bat as Hechavarria was, and a little BABIP bounce with more playing time will give him a chance to contribute a win or so.  Because of this, Tejada ranks fourth.

Jimmy Rollins had a long run of success as one of the top dogs in the N.L. East shortstop game through the 2000s, although the top two players on this list appear to have supplanted him for good.

Things fell apart for Rollins last season, as he posted the third-lowest offensive value of his career. Mike Podhorzer at Rotographs believes the 35 year old began to fall off back in 2012. He stated that:

While Rollins’ power took center stage in 2012, that may have actually been the year that the decline began. His strikeout rate spiked as he swung and missed more often than he had since 2007. Looking back, that should have been a sure sign of a slowing bat, raising red flags heading into this year. Instead of cutting down on all those extra strikeouts, he whiffed even more frequently this year, and swung and missed at the worst rate since 2003.

Podhorzer also noted that Rollins' 2013 batted ball distance had dropped precipitously from his prior marks. Taking more of a broad look at his offensive profile, we see that J Roll just isn't the threat he once was: 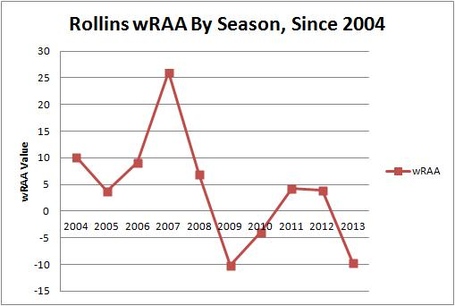 In fact, other than his explosive 2007 season, Rollins has put in a fair number of +5 to +10 offensive value campaigns. I think the Fans' offensive projection is mostly right, and with a solid glove and playing time Rollins appears to be a good bet to reach at least a win and a half for the Phillies. It's not good enough to crack the top two, however, and Rollins places third.

Andrelton Simmons is a straight stud on defense, and one of the most talented glovemen we'll see during our run through the N.L. East. But I'm not confident he can create enough value there -- and on offense -- to beat Ian Desmond out.

Offensively, many writers and fans believe Simmons' .247 BABIP will improve in 2014. His expected batting average on balls in play last year was near .300, so that makes sense. But Tony Blengino at Fangraphs recently checked out the young righty's batted ball profile and noticed some troubling items, specifically Simmons' tendency to pull a ton of his batted balls.

Simmons’ bottom line is likely this – he very likely snuck up on a lot of MLB pitchers last season, pulling a lot of their mistakes over the left field fence. Now a "book" has begun to be compiled on Simmons, and he is going to be peppered with pitches on the outer third of the plate and beyond, with the occasional hard one out of the zone inside to keep him honest. His excellent hand-eye coordination will likely minimize the swings and misses, but weak contact will often ensue if he doesn’t learn to better manage the strike zone and increase his walk rate.

There's evidence that teams began "reading" the book over the second half of last season. Below, you'll see how pitchers approached Simmons from April to June (left) and July to September (right); note that more pitches were targeting the outer part of the plate as the season went on: 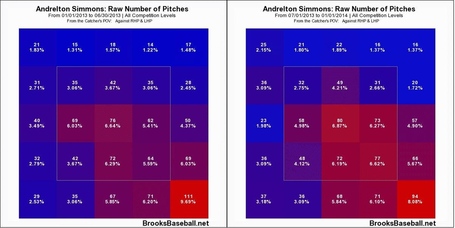 When pitchers kept the ball outside against Simmons during the second half of the year, they saw BABIPs of .120, .111, .259, and .167 in various "away" zones. If hurlers keep this pattern up, and Simmons does not learn to drive outside pitches to right field, his offensive value will have a difficult time crossing the one-win threshold. Plus, teams may chose to shift Simmons more in an effort to reduce his pull effectiveness.

Of course, there's the glove. Simmons posted the highest Defensive Runs Saved value in the history of the stat last season (+41), and posted over almost two and a half wins by UZR before his positional adjustment. Scouts love his glove as well.

But even the best shortstops in the game have trouble posting defense value seasons over +20, as Steve Goldman of SB Nation notes here. The short version of his great article is this: Ozzie Smith, as awesome as he was, only posted four +20 defensive value seasons.  Earning two wins on defense over a long period of time is pretty rare, and the Fans believe Simmons will be half way to Ozzie's mark by the end of his second full year in the show.

What we should project for Simmons in 2014? Jeff Sullivan at Fangraphs noted recently that the more exceptional one's defensive stats are, the more regression is necessary when asking, "what will he do going forward?" Interestingly, Sullivan was writing about Juan Lagares' defense, but the same principle applies to the Atlanta shortstop.

The Fans believe Simmons will come back to the troposphere defensively, grading him out at +25.1. After removing the +7.5 positional credit Simmons receives for playing shortstop, we're seeing a defensive projection around +17 to +18 UZR. That sounds about right. And even giving Simmons credit for over a win worth of improvement on the offensive side of the ball, it's tough to rank him above the next guy on this list. Simmons is an awesome talent, but places second here.

First, he's one of the best shortstop bats in the league. Since 2012, Desmond has put up the second highest offensive value at the position, behind only Hanley Ramirez. His BABIP is not way off base, since his xBABIP last season was .333. There's also his pop, which ranks among the highest for shortstops, and he's able to further gain value on the basepaths. The Floridian is also durable, playing in at least 154 games in three of the past four seasons.

At the plate, Desmond's game is based on aggression; for example, over his career, he has swung at the first pitch 36.1% of the time. To give you an idea of how much he loves to rip it early, the major league average swing rate on 0-0 is 26.5%. And he's been successful when he's done so: a .912 OPS on first pitch contact for his career suggests that he is getting pitches he can do damage with.

Below, Brooks Baseball breaks down Desmond's first pitch profile against hard, breaking, and offspeed pitches from 2012 and 2013.  Note that he's getting hard stuff nearly 55% of the time. When he doesn't get a fastball or similar pitch, he's still able to get good wood on bendy offerings:

Second, while he's not Simmons with the glove, Desmond certainly holds his own; for instance, he placed close to the top third among shortstops in UZR/150 last season. I think a projection around +3 to +4 is probably right, and with the positional adjustment his defense approaches +10 overall, or basically a win. Throw that in with a win and a half of offense and a high replacement value associated with good health, and it gets to be a matter of arithmetic before you realize Desmond is a heck of a player, period. In sum, I favor Desmond's balance over Simmons' excellence with the glove, although you can make a reasonable argument in favor of the Braves' youngster if you like. They are both great players.

Through four position assessments, the Nationals have by my figuring the best player at three spots. While anything can happen during the season, it's still instructive to think about how crazy that opinion would have sounded just three years ago. Mike Rizzo and the front office staff deserve a lot of credit for drafting, developing, and trading for productive players who should help the Nats compete this season and beyond.  Later this week, we'll see where Ryan Zimmerman grades out.

Thanks to Baseball Reference, Brooks Baseball, and Fangraphs for player statistics and information.