What could possibly go wrong with two fan bases trying to take subtle, humorous shots at one another? What do Philadelphia Phillies fans think of the 2014 Washington Nationals? Know any good Phillies jokes? We joined in on The Good Phight's series of NL East roast posts.

One of the writers for the SB Nation's Philadelphia Phillies site, The Good Phight, wrote to us a week or so back to tell/warn us that he was putting together a series of roast posts in which he intended, I assumed, to talk "s" about each of the Phillies' NL East rivals.

He posted his Nationals roast today:

Upon reading it, I decided to respond... (or, really, I guess, he emailed last week like I mentioned and said I could respond if I wanted to and we coordinated these posts)...

With apologies to Norm McDonald, here's our response:

Umm... How do you know the Phillies and their fans have just been in town on a road trip to the nation's capital?

All the beer at Nationals Park is gone and the Navy Yard Metro station is super-crowded.

I'm not saying Ryan Howard is prematurely over the hill, but I'm at the bottom of the metaphorical hill and he reached the top, went over and I can no longer see him. 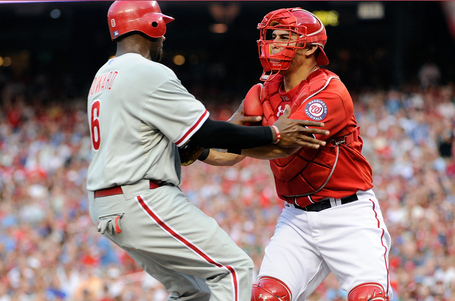 I'm not saying Jamey Carroll is old, but he's 40 and he fought admirably for a spot with the Nationals this spring before he was released, and he takes comfort in knowing there's likely a two-year deal waiting in Philadelphia...

Question: What is the difference between a Phillies fan and a whining baby?

Answer: The baby will stop whining after a while if you give it a bottle. A Philies fan whines more... if you give him or her a bottle. Like a baby, but drunk.

[flips to next card]

I'm not saying Domonic Brown is a bad defensive outfielder, his Ultimate Zone Rating is....

Nats' GM Mike Rizzo called Cole Hamels "gutless" and "fake tough" and he said, "I've never seen a more classless, gutless chicken [bleep] act," after Hamels hit Bryce Harper in the back with a pitch the first time the two faced each other in the majors... but actually, Rizzo didn't say "bleep," he cursed and reporters censored his comments...

Did Phillies fans make up that whole "Werth-le$$" chant thing themselves? That is funny...

[picks up mic and apologizes for dropping it]