In case you're new to the site or haven't heard this before this is Nats Nightly, a collaboration between the District Sports Page and Federal Baseball. Dave Nichols and I, and often Doughouse, talk after every game, including today's 9-7 Nationals' win in New York.

Early last season, Dave Nichols from the District Sports Page and I decided to do a daily podcast to get ourselves on the air and talking Washington Nationals baseball every day/night. We were able to do it after most of the Nats' games last year, and we're going to try to do it again...

BTW: You can find the archive which includes every episode of Nats Nightly in a group a little bit down on the front page of Federal Baseball. It looks like this: 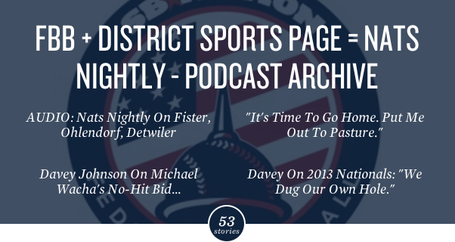 "He found it in the third inning and shut them down and gave us a chance to get back in it." - Matt Williams on Stephen Strasburg's first start of 2014

Federal Baseball's Doghouse joined us this afternoon too, for 15 minutes of talk about the season-opening 9-7 win over the New York Mets in Flushing, Queens, New York's Citi Field.

'09 no.1 overall pick Stephen Strasburg made his third straight Opening Day start for the Nationals.

Washington's 25-year-old right-hander gave up a three-run home run to left-center by Mets' outfielder Andrew Brown in the first, then allowed another run to score on a sac fly in the second before he settled in and shut New York's hitters down, retiring the last ten batters he faced after a two-out walk to Ike Davis in the third in what ended up a six-inning outing in which he gave up four hits, two walks and four earned runs while striking out 10:

"Early on he was a little up in the zone," Matt Williams said after his first major league win as a manager.

"He found his stride in the third and then shut them down the rest of the way. His pitch count got up there so much that we couldn't run him out there for another one. But he found it in the third inning and shut them down and gave us a chance to get back in it."

"Brown hit a fastball and got him," Williams said. "And that happens. But the good thing about Stras today was that he settled in and gave us a chance to get back in the game. That's what kind of pitcher he is."

The Nationals trailed through eight innings, rallied in the ninth and scored four runs in a tenth inning, three of them on Anthony Rendon's first home run of the season, a three-run blast to left off former Nats' left-hander John Lannan that ended up driving in the game's winning run.

"That's what we want to have as our DNA," Williams said afterwards, "that we never give up and we never give in, so they proved that today. We have the kind of folks on this club that can do that, so I'm proud of them."