The Nats have had the top talent -- in my view, anyway -- at three of the first four positions in the we've covered. Does Ryan Zimmerman project to continue the trend? How about Chris Johnson after his good 2013? Nah. It's David Wright.

Early spring training returns have been positive for the Nationals, but not only are we dealing with the preseason, we're dealing with just one week of the preseason (even D.C.'s pro football team won a few of those). There's no question that Washington fans should be optimistic, of course. Within the division, the Nationals enter the 2014 with an above-average right fielder, the leading center fielder, the leading left fielder, and the top shortstop.

How about third base? Between 2009 and 2011, Ryan Zimmerman was among the top third-sackers in the game, never mind the division (of course, Chipper Jones deserves recognition here, even though '09 to '11 weren't his best years. After all, he hit over .300/.400/.500 for his career). But the Face of the Franchise has fallen on harder times recently, and like it was early in their careers, David Wright appears to have edged ahead in the past few years.

I wouldn't be surprised to see some playing time volatility at the bottom end of these ranks this season, although you could say that about most of the positions we've covered so far. Time to round out the right side of the infield.

Anyway, McGehee's a bit weird for purposes of this exercise. He spent last season playing in Japan, so we're using 2012 as his top line. And the Fans haven't projected his season at all, likely because noone knew he had returned (or perhaps even left for) the NPB. ZiPS helps us out here. It projects him to reach around 500 plate appearances and put up a .309 wOBA, good for a slightly below-average offensive performance.

That's pretty middling for third basemen as far as ZiPS is concerned. And McGehee hasn't posted an offensive value higher than -10.7 since that fateful 2010 season.

Still, as our friends at Fish Stripes noted, he had a pretty good year in Japan, although author Michael Jong acknowledged that it's not ML-equivalent performance. Jong ultimately concluded that:

The Marlins know that McGehee is unlikely to return to his old form from 2009 and 2010, but the team does not need that from him to be a benefit over Polanco. The team was particularly looking for power from McGehee and its other signees, and he may be able to deliver just that; the three projection systems expect him to hit almost 16 homers per 600 plate appearances. Only one Marlin last season hit more than that number, so the team would like to infuse some of that added power to the lineup.

Defensively, McGehee is just sort of there; nothing too fancy, frequently makes routine plays, unoffensive.

I'm a little more pessimistic than ZiPS on the playing time item, and for that same reason I suppose it makes sense to dock his hitting a bit (the thinking being, if he hits, he might continue to receive playing time and accumulate value that way). For me, McGehee ranks fifth.

Cody Asche actually has a lower ZiPS wOBA projection than McGehee, although the Fans like him a little more.

Keith Law stated last offseason that while Michael Young may have been a stopgap to Asche in 2014, Asche himself also was going to be a stopgap this season. And Phillies website Crashburn Alley graded the Missouri native a "B-" in their 2013 report card series. We've seen some high ceiling under 25 players during this review -- Bryce Harper, Mike Stanton, and Andrelton Simmons all come to mind -- but Asche doesn't have quite the same pedigree.

The bulk of Asche's value comes from his projected playing time. While he only earns a combined +3.8 runs of value on the offensive and defensive end, +14.75 runs come from his 506 plate appearances. Will the Phillies be happy with so-so offensive production for the entire season? Unlikely. Philadelphia has Maikel Franco, one of their top prospects, waiting in the wings. Scout.com placed Franco's hit tool ceiling at 55, power at 55+, and arm at 55+, all of which are above average ratings. In other words, he will play in the bigs sooner or later.

While it's possible that Asche gets off to a hot start and has sustained success deep into the year, I'm betting that Franco gets an extended look at some point. And that cuts into Asche's value. For that reason, he places fourth.

Most Braves fans will agree that Johnson was a pleasant surprise last year, mostly because he posted the highest offensive value of his career...

...and I'd venture that a good bit of that value came from his MLB-leading batting average on balls in play. Because I always do this when looking at how hitters performed on balls in play, here's Johnson's obligatory xBABIP: .341. Still pretty high -- that would have placed tied for 22nd among 140 qualified players. He's also run a pretty high career BABIP (.361). For kicks, if you run his batting average using his xBABIP mark, he only hits .278, instead of .321.

As Jeff Zimmerman of The Hardball Times recently pointed out, though, not every fly ball is the same.  Here's the gist of it:

If a ball is in the air 2.5 to 4.0 seconds, it is fielded for an out nearly 50 percent of the time [compared to all fly balls, which are outs 62% of the time]. Also, if the ball is not caught, it is more likely than other fly balls to end up as an extra-base hit. Plays in this time range are the most critical for determining which teams make the most important run-preventing plays and which ones don’t.

Zimmerman was discussing the hang time in the context of defense in this section, but the 2.5 to 4 second harder hit fly balls are, among the subset of fly balls, ideal. This method reduces some of the subjectivity associated with labeling batted ball types, specifically line drives and fly balls. Johnson did hit a ton of line drives (27%, league average 21.2%), but how did his batted balls, um, hang?

You'll see that the legend and info provided by Inside Edge doesn't exactly match up with the ideal 2.5-4.0 range, but the purple dots well approximate hard hit balls when in the outfield. And Johnson peppered a good amount of red and orange contact, too.*

*see here for more information on what Inside Edge offers.  It's cool.

The raw values for each time subset aren't provided publicly (that I know of), so it's tough to figure out where exactly Johnson stacks up against the rest of the league. Although he was fortunate in 2013, it is pretty clear that, after reviewing his career BABIP, line drive rate, and hang time, he's still a hard-contact hitter.

Even if Johnson does not fall some with the bat, the top two players here are better all around. He places a solid third for me.

I'm sure he's done it before, but I really want Ryan Zimmerman to get off to a hot start.

If it seems like the Z-Man has mediocre starts to the year (see last year), it's because he does. Baseball Reference tracks both his career and yearly performance by month, and we can use tOPS+ to compare how Zimmerman does each month relative to his career average OPS. Below, 100 represents his average, and higher is better: 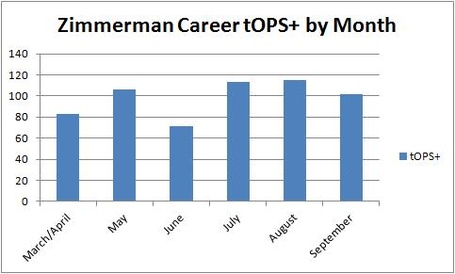 I looked at Zimmerman late last year and tried to explain why he was crushing everything during that time. There are probably several good explanations, one of which I thought was improved timing during his swing sequence. As the year went on, it appeared that he stayed back longer during his patented high-front leg kick trigger, which allowed him to be more balanced when he exploded forward to make contact. If he can do that, the Fans' slightly higher offensive rating may be achieved with some good early year results.

Defensively, over a one win improvement from '13 is tough to swallow, even considering Zim's past history as a stalwart defender. For example, according to Inside Edge defensive data, Zimmerman converted 82.1% of plays labeled as "likely" to be successfully fielded (good for 10th among 20 qualified third basemen) and 93.9% of routine plays. While that latter figure may seem high, it's actually dead last in the qualified 3B hierarchy. Raise your hand if you are really that surprised.

I'm not sure Zim gains a win on defense this year, and with the move to first his positional credit will be hurt (just how much depends on how often he is played there). In the end, I believe he'll get to at least three wins, similar to last year.  Not bad, but not good enough for the N.L. East crown.

David Wright is a pretty beastly player; I love Zimmerman, but this really isn't that close in my view.

For his career, Wright has a .381 wOBA and 137 wRC+. He's basically George Brett through their age 30 seasons, which is saying something.

I mentioned earlier how Zimmerman was the top N.L. East third baseman from '09 to '11. Check out how he and Wright compare over their career offensively, using wOBA:

Wright's on top now.  Plus, his defense has remained solid, which is something his Tidewater colleague has, at least right now, trouble saying.

Third base presents some interesting stories. We can see through projections that both the Marlins and the Phillies still have some improvement to look forward to, while Braves and Nats fans are probably thinking they'll take last year's production given some question marks surrounding their players. Although the Mets may be rebuilding, David Wright is a great foundation.

Next week, we might do an abbreviated second baseman look, and also feature some new defensive measurements relevant to Washington's strategy at times during spring training.

Big thanks to Baseball Reference, Baseball Prospectus, The Hardball Times, and Fangraphs/Inside Edge for data.