Some guys have no luck in the game of baseball. When you've suffered multiple season-altering injuries -- never mind a kidnapping -- you probably qualify. With Wilson Ramos on the shelf, can we be optimistic about backup Jose Lobaton's chances to fill in?

The opinions in the Game Thread #1 were pretty unanimous, and, to that end, probably obvious for most Nats fans.  Wilson Ramos, having worked his way back from multiple injuries over the past several seasons, reportedly suffered a broken metacarpal, or, possibly, something less than that?

Either way, it's pretty safe to say that the Nationals are also hurting as a result of his injury, and the team is certainly hoping for their 26-year-old backstop to return and maintain good health for the rest of the season. More immediately, the team will likely look to Jose Lobaton to fill the gap, along with one of either Jhonatan Solano or Sandy Leon as a backup.

Ramos and Lobaton On Offense

Lobaton probably won't add as much with the bat as Ramos. However, fans and the team should have some optimism about Lobaton's ability to contribute, at least with respect the team's 2013 options at backup. Below, check out just how bad the team's choices were after Ramos last season, courtesy of Fangraphs:

Having broken into the league for more than 40 PAs in 2012, last season was Lobaton's best year offensively. In 311 plate appearances, he managed to produce about 3% more runs than the average major leaguer, which translated into a just about no offensive value (0.1, to be precise).

That's not as bad as it might seem. For instance, the average offensive production for major league catchers last year was 92 wRC+, and it was even worse for the Nationals, who checked in at 80 wRC+, including Ramos. Even taking Lobaton's career wRC+ -- 87 -- he's still not terrible among his peers.

But we're talking about Wilson Ramos here! The Buffarhino was pretty awesome among backstops with at least 300 PAs in 2013, placing 10th in the league at the position by wRC+ (114). To that end, he earned a run greater value on offense than the 29-year-old Lobaton in roughly the same number of plate appearances (1.1 for Ramos, and 0.1 for Lobaton). So, on the whole, it seems clear that Lobaton is inferior to Ramos with the bat. Nothing all that surprising, really, but nonetheless helpful to assess possible gaps in production.

By Fangraphs' admission, assessing catcher defense is a tricky thing. There are many variables: blocking pitches, fielding one's position, executing plays at the plate (what used to include blocking the plate, and picking short hops), catching would-be base stealers, in addition to game-calling and framing ability. There's a lot to account for that isn't as easy to assess as shortstop's range, or an outfielder's arm.

Accounting for those limitations, Ramos measured up favorably to Lobaton defensively last season. Indeed, by raw value, the Venezuelan was roughly three and a half runs better than his backup with the glove. With his superior defensive rating, we can be pretty confident we've got a better overall player, right?

Probably. Fangraphs doesn't account for pitch framing skills, which are an emerging area of research. There are several ways to do so, and I think the most compelling study of how to value this talent was studied by Harry Pavlidis and Dan Brooks in their Regressed Probabilistic Model for pitch framing, published in early March of this year.

The entire analysis is a compelling read for its thorough methodology, testing, adjustments, regression, and results.  I'll tell you the long and the short of it in two .gifs, courtesy of Ben Lindbergh, Editor-in-Chief of Baseball Prospectus, when he wrote at Grantland last year:

Lindbergh writes of both pitches,

They’re both four-seam fastballs thrown by right-handed pitchers to left-handed hitters. They both pass through the strike zone 21 inches off the ground, between 11.7 and 12.9 inches from the center of home plate. They both hit their targets, so the catchers know where they’re headed and have time to prepare. And they’re both called by the same umpire, Sam Holbrook.

Lindbergh details how different catcher talents affect whether a pitch on the border is called either a strike or ball; here, Jose Molina's quiet receptiveness favors a strike call over Ryan Doumit's reach and head jerk.

In essence, that's what the RPM study answers: what are the odds a given pitch will be called for a strike? What is the value of that strike given the count? How do we account for pitchers and umpires? Along with some regression to the mean, Pavlidis and Brooks are able to answer these questions, and, accordingly, assign framing run values for all catchers since 2008. This gives us more information to assess a catcher's talent.

Their results were pretty striking. At the high end, talented framing catchers such as Jonathan Lucroy and Jose Molina were banking about 25 runs, or +2.5 wins (there are 10 runs to a win), of value for their team per season. The lesser catchers -- Kurt Suzuki among them -- were taking away around 2 to 2.5 wins. That's a meaningful swing, and teams are beginning to realize this is an area to improve without spending too much in the way of prospects or cash (for now, at least).

Ramos And Lobaton, By Framing Runs

The RPM research offers both raw run values, as well as runs per 7,000 opportunities, which is a little more than the number of pitches received by Yadier Molina last year.

It's probably best to look at the two on a rate basis.  So here's that, with Ramos first: 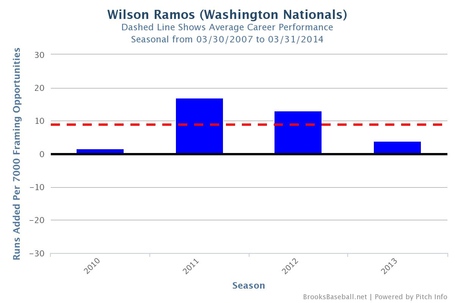 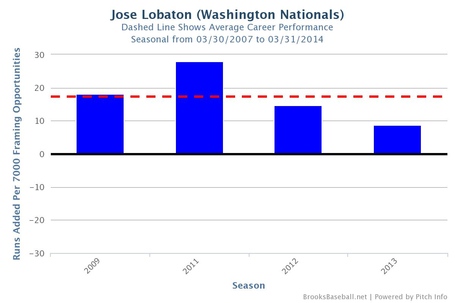 By this research, Lobaton is the superior framer, and creates a fair amount of value through this work behind the dish.  The exact 2013 figures for each are:

There is some historical separation as well, although the two were fairly close in 2012. And keep in mind that Pavlidis and Brooks' study is not infallible; ultimately, your view of the difference between the two comes down to how much ground you think Lobaton can make up defensively against Ramos' offensive advantage.

In any case, call it a +4 run advantage for Lobaton on framing using either on a rate or raw basis. Quite convenient, then, that when we add that to each player's WAR, we end up with the follow assessment: 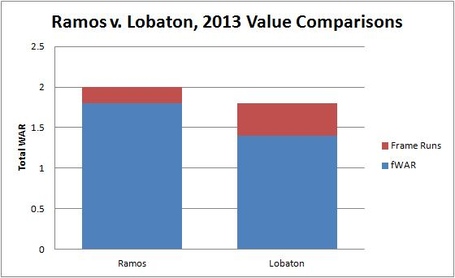 If you prefer to focus just on offensive numbers, your opinion will be more drastic, which is fine. But defense exists, and these evaluative methods are also passing the eye test of professionals in the business, as Pavlidis and Brooks demonstrate.

Importantly, we also have to account for the fact that the new Lobaton will likely be Solano or Leon, who have not shown much in the way of value. In that context, of course, the difference between Ramos and Lobaton against Lobaton and our alternative is more obvious (and hurtful). Everyone agrees on that.

Lobaton helps make up some value against Ramos with his pitch framing skills. However, that section of Ramos' game isn't terrible; in fact, he demonstrated just yesterday his skill for framing, and likely put himself close to the top of the day 1 leaderboards in the stat with this gem: 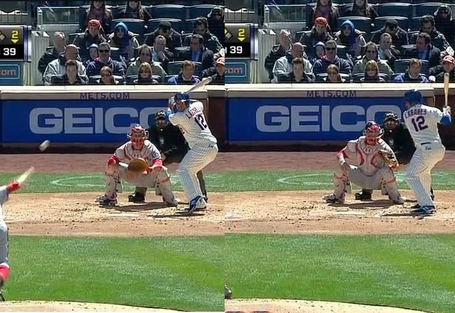 Sure, the umpire gave Washington a strikeout on a clear ball, but note how quiet Ramos is on the before and after comparison: head only rotates to track the ball, arm subtly retracts in (rather than overtly left or right) with the arc of the breaking pitch, arm is solid on receipt of the offering, posture is consistent, shoulders are practically level -- he could have done a lot to give this pitch away, but sold it for his team, and helped them out of an early-game jam. It really was big both at the time and in retrospect. A .gif would do this proper justice, since the glove movement appears more drastic than it actually was, so I regret the absence of that. But it was good work.

An extended loss of Ramos hurts the team not so much in the sense that the drop off to Lobaton is significant, but more that Lobaton's Lobaton, if you will, doesn't figure to be as capable of a backup. It will be interesting to see how the team chooses to deploy Lobaton if Ramos figures to miss significant time, but in any case, here's hoping for a speedy return for one of the Nats' promising young stars.

Thanks to Baseball Prospectus and Fangraphs for always-essential data.

*Addendum: Pavlidis released the 2014 RPM projections, which show a satisfying correlation of .81 when analyzing 2013 results, the same day I drafted this piece.

He forecasts Ramos with 75% of the team's pitches received, and adding the 14th most runs by a catcher this year (+13.2 runs when factoring in the run values of a particular count, and +10.9 when using a static run value for all count situations). Whether Ramos reaches 75% is in doubt, of course.

Lobaton was projected for ~15% of pitches received, adding +2.3 runs in context and non-context counts. Place his projections at 75% playing time, and you arrive at +11.5 runs. Considering Lobaton has earned better rate value than Ramos, it is interesting to extrapolate his numbers and arrive at a lower mark.  Perhaps, after considering BP's adjustments, Lobaton makes up less ground than originally thought.