The Nats had a great bounce-back Monday, then an ugly loss last night after a bad weekend in Atlanta. A big part of the team's success going forward will be how Danny Espinosa's contributes. With Ryan Zimmerman out for several weeks, what is the drop off in performance to Espinosa?

Share All sharing options for: Washington Nationals' Injuries: The drop-off from Ryan Zimmerman to Danny Espinosa

In law, courts can take what is known as "judicial notice" of a fact to admit that event into evidence without either party having to go through formal introduction of the same. For example, think of street locations, or the day of the week on a certain date. The basis for this evidentiary rule is that street locations or days of the week on specific dates are common knowledge. In other words, parties and courts should not have to labor through introduction of routine things when everyone knows that the south part of Half Street ends at the center field gate.

If there were a 2013 Nats' fans equivalent to judicial notice -- there probably is, and most of it is probably determined in the Red Porch -- it would be that Danny Espinosa had a very, very bad season. He slugged .206, for goodness sake, and in the end performed 77% worse than the average major league hitter over 167 at bats. Only one hitter performed more poorly in the entire league last year (Luis Cruz. . . . who is Luis Cruz?) given 160 trips to the dish.

So it was bad. And everyone knew that. Sure, Espi's defense was good by many metrics and the eye test, but it wasn't helping the team's cause as clearly, nor was it outstanding enough to make a great difference. When Espinosa was named in the running for the starting second base spot this spring, many fans (including myself) let out a groan.  Anthony Rendon looked perfectly capable last year, and with room to grow, it's no surprise he's taken off this year.  The hope, of course, was that Espi could fill a utility role with a strong glove and timely hitting.

But then Ryan Zimmerman's health, or lack of it, happened (courtesy of Baseball Prospectus): 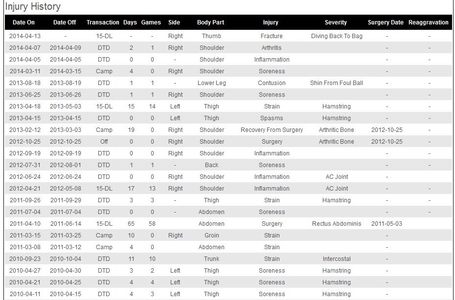 That's just since 2010, and it's not to be hard on Zim, but deep down Washington's fans knew that Espinosa would probably get significant time at second, effectively replacing Zimmerman when Rendon slid to the hot corner.

The Difference Between Zimmerman and Espinosa

Of course, Espinosa is not Zimmerman -- not literally, or figuratively, in terms of offensive and defense value to the Nats. But comparing the two is interesting. Here's a quick chart of each player's contributions at the plate and with the glove in 2013 by Fangraphs' data; a value of ten corresponds to a win: 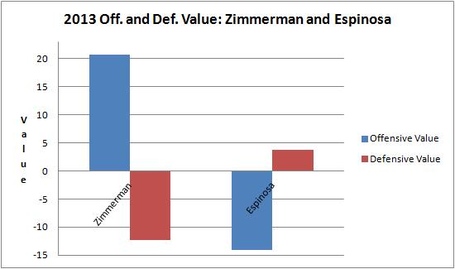 Call it a win and a half difference on equal playing time if you like Espinosa's defense, or closer to two wins if you discount how it figures into a player's overall assessment.

That's a meaningful difference over the course of a season, but perhaps not as terrible as just looking at Espinosa's offensive numbers would lead you to believe. And there seems to be room for optimism there, too.

In 2013, Espinosa struck out a Dunnian 28% of the time. He's made strides in that department this year (17% strikeouts), although as the section header makes clear, we are dealing with a tiny number of plate appearances -- just 29 before last night's game.

In particular, it looks like he has so far learned to address his vulnerability on low and inside pitches to left handed batters, where he hit .111 last year. On the left, below, are Espi's 2013 total pitches in respective zones up top, and whiffs below. This season is on the right (view from catcher): 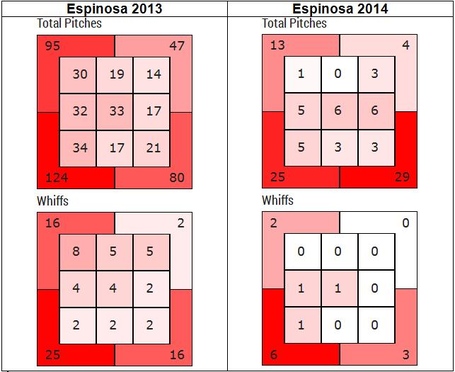 Last year, Espi swung and missed at 20% of pitches low and out of the zone on both the left and right of the plate.  That ratio has held early on for the left zone (six whiffs on 25 pitches), but he has improved on the lower right section, or, inside and low to a left handed batter.

Want more good news? After last night's game, I hope so. Anyway, and more generally, his whiff percentage is down about 3 percentage points from 2013. It's still above average, yet it isn't crippling. And we'll have to wait another 31 plate appearances before his improved strikeout rate "stabilizes," but he's clearly adopted a more disciplined approach at the plate this season. Here, we see his swing percentage on hard, breaking, and offspeed pitches by year:

Yea, the MLB average swing percentage in 2013 was 46.4%. The last time he was under that average on any type of pitch was 2011. Sure, he's still hacking at heaters, although all things considered, that's cool.

Why? As Dan Kolko reported yesterday,

Espinosa worked all spring on being calmer at the plate from the left side, just trying to hit the ball where it's pitched and not drive it to the pull-side. His swing is a bit longer from the right side, but during his big league career, he's had more success from the right side.

Want an example of that reformed approach? Who could forget his Opening Day ninth inning walk to keep the Nats in the game: 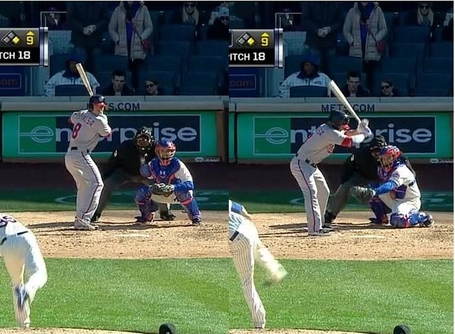 By cutting down on swings where he can't do damage and focusing on getting good pitches to hit, Espinosa has thus far upped his in-zone contact rate to almost 84% (league average is 87%, but hey, we know Espionsa isn't a contact guy), which would be the highest value of his career. It's translated into an above-average line drive rate, and while his BABIP won't stay over .400, the underlying signs are encouraging.

Give a lot of credit to Espinosa for showing meaningful improvement right out of the gate after a horrible 2013. While he's not Zimmerman, and he's not a .991 OPS hitter, he is certainly a player who is able to contribute to a successful team with hopes of competing in October. It will be fun to follow his performance throughout the season to see if early returns indicate longer-term success.

Thanks to Baseball Prospectus, Baseball Savant, Brooks Baseball, and Fangraphs for data and information.