"Guys were aggressive. He threw quite a few fastballs early in the count and we were ready for him," Miami Marlins' manager Mike Redmond said after the Fish scored six runs in the first two innings of Washington Nationals' starter Stephen Strasburg's outing in Miami.

Share All sharing options for: Marlins attack Nationals' Stephen Strasburg: "They came out swinging again and they hit the fastball." - Matt Williams

Christian Yelich jumped on a 1-0 fastball. Marcell Ozuna lined a first-pitch fastball to left. With two runners on to start the first inning last night, Giancarlo Stanton stepped to the plate and crushed a 2-1 change, hitting a 457 ft home run into the shrubbery atop the high, lime green center field wall in Marlins Park. 3-0 Miami.

Jarrod Saltalamacchia connected for the fourth hit off Washington Nationals' starter Stephen Strasburg in the first inning last night, sending a first-pitch fastball out to right for a two-out single.

"They don't want me to get comfortable. That's huge. A lot of dominant pitchers with swing-and-miss stuff, that's what their approach is going to be..." - Strasburg on Marlins' approach last night in Miami

The second inning started with Adeiny Hechavarria tripling to center on a 93 mph first-pitch fastball. Ozuna's second hit of the game came on an 0-1 fastball. Casey McGehee's two-run single later in the inning was a line drive to left on a first-pitch curve.

Strasburg was out after four innings on the mound in Marlins Park last night, having allowed eight hits, three walks and six earned runs.

The Marlins' approach is nothing new.

The Nationals and their 25-year-old right-hander know it's going to happen. Nats' skipper Matt Williams talked about it after Strasburg shut the Marlins down last week in the nation's capital.

The difference last time out, as Williams explained it, was that Strasburg was able to establish his fastball and then work off of that.

"I just think he established the fastball early," Williams explained, "and again, they came out aggressive and that happens with Stephen. Teams swing early against him, so he was able to establish it and work his changeup off of it and strike one is the key."

Strasburg knows why opposing hitters do what they do when they face him, as he explained to reporters including MASN's Dan Kolko after last night's 11-2 loss to the Marlins:

"'They don't want me to get comfortable. That's huge. A lot of dominant pitchers with swing-and-miss stuff, that's what their approach is going to be - trying to go out there and get comfortable and get you early. I've just got to do a better job of not worrying about that and keep pounding the strike zone. I felt I had a good mindset today, it's just seemed like every pitch I threw, they hit it.'"

Marlins' skipper Mike Redmond praised his hitters' approach when he spoke to reporters after his team snapped an eight-game losing streak and won for the first time in five games against the Nationals this season.

"Guys were aggressive. He threw quite a few fastballs early in the count and we were ready for him." - Mike Redmond on Marlins vs Stephen Strasburg

"I think we've put together some pretty good at bats off him over the last couple years and had some good games against him," Redmond said. "I know he's statistically won a lot of games against us and at their place he pitched really well, but we also got to him a few times last year and I think you saw that today."

The drop-off from Zimmerman to Espinosa Nats and Marlins' benches clear, tempers flare

"It seemed like we had a nice plan going," Redmond continued.

"Guys were aggressive. He threw quite a few fastballs early in the count and we were ready for him. And we got a couple breaks too. To win ballgames you've got to get a few breaks as well. But I liked our approach. I think we came out aggressive and it's always nice to get that big home run right out of the shoot."

"They came out swinging again and they hit the fastball," Matt Williams said in trying to explain Strasburg's abbreviated outing. "So, I'm thinking it's fastball command, throwing the ball where he wants to. It looked like the ball was up tonight. They put good swings on him though."

Strasburg confirmed as much. The problem, he told MASN's Mr. Kolko was his inability to keep the ball down in the zone.

"Leaving pitches up," he said. "They came out real aggressive and they didn't miss. ... [They were] jumping on me early and piled up some singles there and obviously that that homer to [Giancarlo] Stanton didn't help."

With the three-run blast last night, the Marlins' 24-year-old slugger is now 9 for 26 vs Strasburg with four doubles and three home runs in 29 plate appearances so far in their respective careers.

"For me it's just balls left in the middle of the plate and up. Guys are professional hitters. They've got a bat in their hand, they're dangerous." - Matt Williams on Strasburg's struggles in Miami

Matt Williams said he would have to go back and look at Strasburg's four innings of work to see what went wrong.

"We'll have to watch the game back and see," he said. "But for me it's just balls left in the middle of the plate and up. Guys are professional hitters. They've got a bat in their hand, they're dangerous. So, location was not where he wanted it for sure."

As Williams saw it, it wasn't just a matter of the Marlins' hitters ambushing Strasburg. "It's one thing to hit first-pitch fastballs," Williams said, "but it's another to throw the ball where you want to and I don't think he was able to do that. So, we'll watch the game back and see what we can come up with."

Talking about the fact that another one of his starters got knocked around early, with the Marlins taking a 6-0 lead after two innings, Williams said being prepared at the start is something that the Nationals have to concentrate on going forward.

The Nationals have managed to battle back in some games early this season, but as Williams explained, it's not something you want to be doing every night.

"It's a concentrated effort to be able to go out there and get through the first inning as quickly as you can," he said.

Stephen Strasburg struggles on the mound in Miami 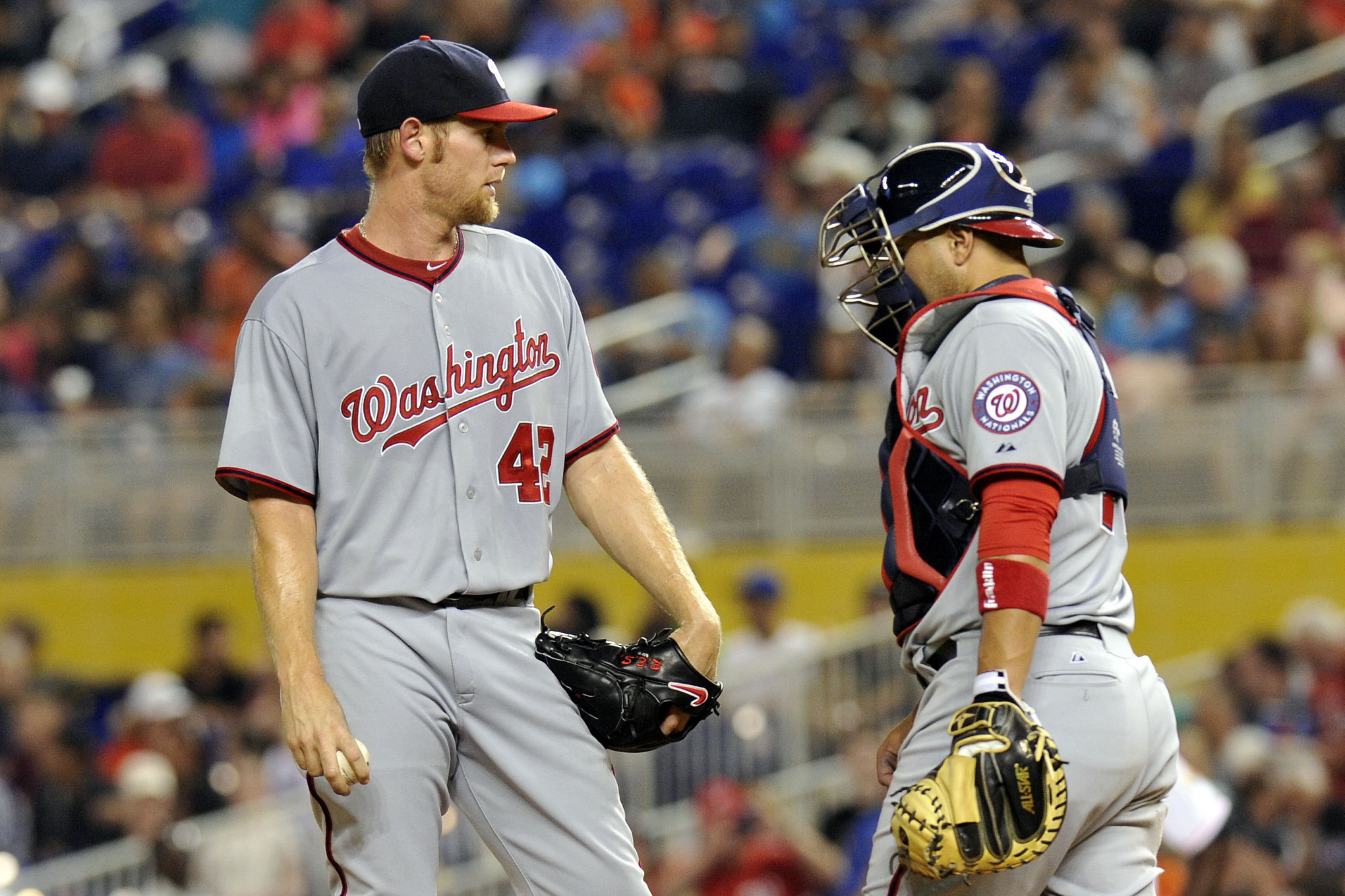 "It doesn't happen every time, but it's a concentrated effort to get that done so we can get, if we're on the road get our second at bat. If we're at home get our first at bat and go from there. But it's been difficult early on, not in every game, but in some games where the starters have given up early runs and we're behind. We've come back in some of them, but it's tough to come back in all of them."

Tanner Roark gave up three hits and two runs in the first when he faced the New York Mets in his first start of the 2014 campaign. Last time out in Atlanta, the right-hander threw a scoreless first, but surrendered three hits and four runs in a 30-pitch second. The 27-year-old starter takes the mound in the series finale with the Marlins tonight.