Washington Nationals' skipper Matt Williams told reporters after last night's 5-4 win over the Los Angeles Angels that he lifted 28-year-old left-hander Gio Gonzalez after five innings and 83 pitches because the southpaw was dealing with shoulder tightness.

"Going out for the fifth inning, it's a little cold night tonight, Gio had a little shoulder tightness tonight," Williams said.

"The telling day I think will be when he throws his pen. Make sure that he's good there, but can't really tell much now..." - Matt Williams on Gio Gonzalez's shoulder tightness

Gonzalez went back out for the sixth and gave up a walk to Mike Trout and a double by Albert Pujols before he was pulled.

"Ordinarily I wouldn't take him out of the game there," Williams said, "but we want to make sure that he's okay for our future too. So, cold and windy and he had a little bit of tightness so we wanted to make sure he's okay."

Gonzalez played down any concerns when he met with the press. "I feel fine now," he said. "Did all my exercises. Feel great. On to the next question."

Before the start of the Nationals' four-game set with the San Diego Padres, Williams was asked if there were any updates on Gonzalez.

"Today's he has normal after-a-start soreness," the Nats' skipper said.

"He's going to take today and do lots of treatment and make sure he's good to go. The telling day I think will be when he throws his pen. Make sure that he's good there, but can't really tell much now, the day after -- 12 hours after. The next few days will give us a better idea though."

"I'm not concerned about it. I don't think he is either, really. You want to be careful, but I don't think there's any major concern there." - Matt Williams updating reporters on Gio Gonzalez

Williams was asked how concerned he was at this point?

"I'm not that concerned," he responded. "The fact that he could go out there and pitch and be fine, it wasn't something where he went, "OH!" It's just tightness. And I think that happens to pitchers over the course of a season anyway. I'm not concerned about it. I don't think he is either, really. You want to be careful, but I don't think there's any major concern there."

Williams also updated reporters on Doug Fister's continuing rehab work. The last time the Nationals' Manager provided an update Fister was coming off a start in extended Spring Training in Florida. Fister is in the nation's capital now and he threw again today.

"40 pitches today, bullpen," Williams said. "He felt good. And so his regular start would be Sunday."

"I think it's going to be at Potomac, yeah," he said. " But he felt good in the bullpen today, so he's good to go for his next one and that one is four [innings] and 60-ish [pitches]. Depending on how he gets through it. The pitch count is one thing, but four ups and working into a real game situation is more important, but four and 60, roughly."

Williams said he spoke to Fister about the bullpen session today and the 30-year-old right-hander's location wasn't there, which didn't surprise the first-year skipper. 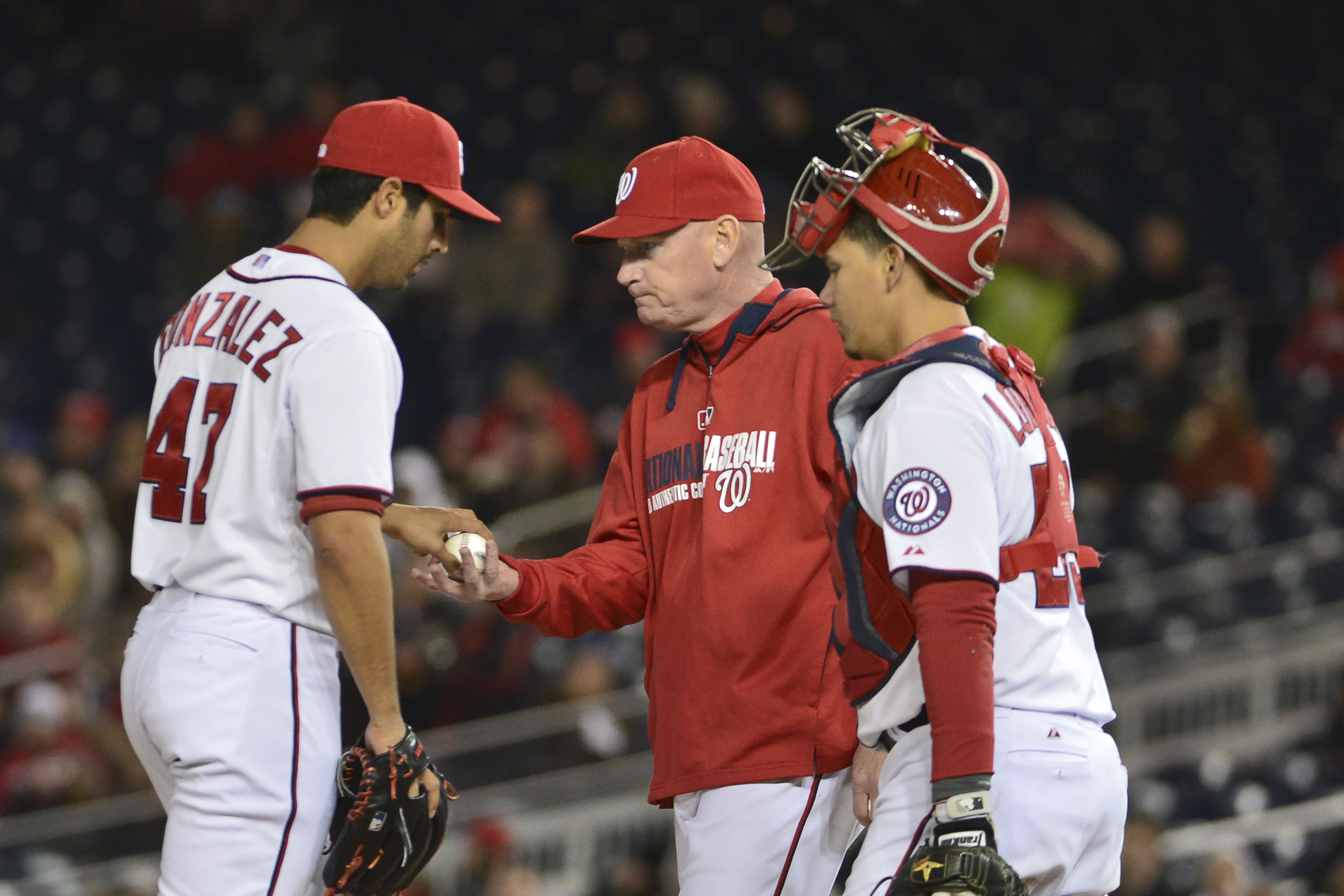 "I talked to him today about it," Williams told reporters. "He said, 'My location wasn't exactly where I want it to be, but I felt good about it.' So, that's all I care about, really, is how he feels, because I know that the location will be there as he builds and as he gets stronger and he works into the fourth, sixth, seventh inning, it will be there. So I'm not concerned about stuff-wise right now, I just want to make sure that he feels good about it. And so far, so good. He feels good. Ready for his next one."

Assuming Fister has no problems in his first rehab outing, is his Nationals debut coming soon?

"It depends on how he feels," Williams said. "But, generally, if he can get through this next one and get to five [innings] and 75-ish [pitches] then you would say he's good to go for a major league start.

"It depends on how he feels though. So we'll keep that in mind as we go. It's still unclear. Got to get him through this next one."