Nats broadcaster F.P. Santangelo has mentioned during several broadcasts that hard-hit batted balls simply aren't carrying at Nationals Park like they normally do. And it's true, more so with respect to the good guys, it seems. What's up with the home field?

The Nationals are 7-7 at home this season, good for a .500 winning percentage on the young season. To match last year's number, they'll have to pick up the pace a little -- of course, there's plenty of time -- to get to their 58% victory mark. And during the team's playoff campaign in 2012, they won 61% of their games at home. It's been something of a weird start in many ways, and Washington's performance at home has been part of that.

In fact, the team is currently "hitting" .214/.301/.325 inside the friendly confines (before last night's 16 hit outburst), or about 25% worse than other major league teams do in their home parks. The team is basically performing like Ian Desmond at home (with OPSs for both in the low .600s), only with less power. What is up with that?

How Nats Park is Currently Playing

Baseball Reference has the Nats' park factor at 82 for hitting and pitching early on this year. The further below 100 a park's value is, the better it is for pitchers. And don't take BRef's word for it: according to park factors at ESPN, here's how the stadium ranks among the 30 clubs by different measurements:

Nats' color man F.P. Santangelo has stated during several broadcasts that hard hit balls simply aren't carrying far.  Just last night, he noted on Eric Stults' double that the ball appeared to be traveling more with the slightly warmer temperature at the park. Ditto for the Nats' dingers.

He's at least right about the fact that balls simply aren't carrying. Check out the chart below from Bill Petti's Spray Charts tool, where we compare all batted balls at Nats Park from the start of the 2013 season through April 20, 2013 on the left, and the start of 2014 through April 20, 2014 on the right (the tool is only current through the 20th). We limit our search for batted balls traveling 275 feet and greater:

It's hard to tell because the image inserted is much smaller than the original, and I can't figure out Doghouse's black magic to embiggen, but balls appear to have been carrying further in the outfield last year. For example, and even counting the four D.C. home runs after April 20, 2014, there were 22 home runs last season against 16 so far this year. The fly outs appear to be down in frequency, too. It's like long flies are taking a stay-cation.

And it's not as if the Nats were camped at home in early 2013, causing the discrepancy illustrated above. Through April 20 of this season, the Nats had played 10 games at home, whereas through that same date last year the team had played just 9 games.

One explanation for the decreased volume of flies and liners at 275 feet and greater is that the team is striking out in 23.1% of its home at bats this year. It's not strictly apples to apples, but the good guys whiffed on strike three just 18.2% of the time last year at home (of course, the team struck out less overall last year, too). They are also walking more (10%) at home than they did over all of last season by a couple percentage points. That's another reason.

But interested in finding an answer and having nothing better to do, I counted all total batted balls at Nats Park for each year based on the above charts, and divided by home runs. Through April 20, 2013, 22.9% of batted balls over 275 feet left the yard (22 home runs against 96 total in the sample). Through April 20, 2014 -- and backing out the four home runs after that date we included earlier -- only 17.9% of batted balls over 275 feet were taters (12 of 67).  Visually: 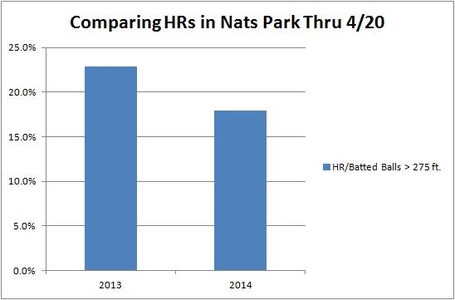 This includes both home and away teams, of course, but away teams aren't doing exceptionally better; the Nats' sOPS+ in their home park is 93, which means opposing teams are hitting 7% better -- roughly a .670 OPS for visiting teams against the .626 mark for the Nats. If the park was going to play tough, it may as well be more favorable for the home team.  But it hasn't.

Why Is Nats Park So Tough?

There's probably no real explanation or silver bullet, but that never stops good internet bloggers from pretending there is. According to several people much smarter than me, about 80% of baseball travel is explained by altitude, with temperature checking in at 13%, and air pressure and humidity accounting for the remaining 7% of variability (unfortunately for this article, the study was conducted in July).

I could be wrong, but Nats Park is probably at the same altitude this season that it was last year, so that's out. Thanks to Weather Underground, though, we can see what the temperature was doing through the dates we've looked at above.  Below are the average low, average, and high temperatures for April 1-20, 2013 and April 1-20, 2014:

Lookit!  It's been colder this year. Why does that affect a baseball's flight?  "When air warms, it expands. This warming and expansion lowers the density of the air. This produces longer flight distances, all else being basically equal," according to meteorologist Jeff Haby.

We don't know the average temperature during the games, of course, and it's also hard to tell just exactly how much a three degree drop in temperature affects batted ball distance (the study referenced above found that on a typical July afternoon, a 10% decrease in air density can produce 4% greater distance in a home run ball).  But on the surface of things, it seems F.P. is dead on target here, too.

Nationals Park is playing tough this year; that much we know. Exactly why is less certain.

It's also reasonable to conclude that the Nats are having a more difficult go of it at home than opponents, but there's too much noise to know whether (and how much) it is down to the home park. After all, the team has seen the Braves and Cardinals' pitching for the majority of the sample, two teams in the top seven in baseball in pitcher fWAR.

It could just be one of those weird things that happens early in the season.  Hopefully, as the temperature warms up, we can expect the team's offense to do the same. With the team's pitchers performing to their high talent level -- and with Fister's addition -- the friendly confines should become more so in the near future.

Thanks to Baseball Reference, Fangraphs, and Weather Underground for data.

Addendum: This link may take you to a larger version of the spray charts above.

More addenda: Some great points on twitter regarding wind and start time of games.  On the latter point, 4 of the 9 games through the 20th last year began during the day (4:05 or earlier). This season, 5 of the 10 have started at 4:05 or earlier.