Washington Nationals' starter Taylor Jordan has struggled in his last few outings including last week's loss to the LA Angels, but he looks to get back on track this afternoon when he takes on the San Diego Padres in Nationals Park.

Share All sharing options for: Nationals' starter Taylor Jordan looks to get back on track vs Padres

Taylor Jordan started strong this season with a 6 1/3-inning outing against Atlanta in which he limited Braves' hitters to six hits and one earned run in a 2-1 win in Nationals Park in which he received no decision.

"You make mistakes to somebody like Albert, and you're going to pay for it. He's been doing that for a long, long time." - Matt Williams on Pujols hitting 500th HR off Taylor Jordan

Last time out against the LA Angels, Jordan got tagged for four runs in a 32-pitch first inning which saw Albert Pujols hit his 499th home run out to left field in Nationals Park. Jordan needed just 28 pitches to get through the next three innings on the mound, but in the fifth inning he surrendered no.500 to Pujols, who took a sinker up in the zone out to left field for a two-run blast.

"I just put a lot of pressure on myself to make that pitch, and I didn't execute it," Jordan told reporters after what was an out-of-character start for the extreme ground ball pitcher who surrendered just 14 home runs total in 339 IP in five minor league seasons (one HR per 24 1/3 IP) before making his MLB debut last summer. On the year in 2013, he gave up just four total last season in 139 innings between High-A, Double-A and the majors.

"I don't know what the cause of it is, but if I can get my sinker in the location that I want it, then velocity shouldn't really matter too much." - Taylor Jordan on drop in velocity in 2013

After the last outing, Jordan was asked about his decreased velocity so far this season, which has seen his two-seam fastball drop from an average of 91.4 mph in 2013 to 89.3 mph through his first four starts while his four-seamer has come in at an average of 90.0 mph this season, down from 92.3 last year.

He said he was less concerned with the drop in his velocity and more worried about command. "I don't know what the cause of it is," Jordan said, "but if I can get my sinker in the location that I want it, then velocity shouldn't really matter too much."

Nats' Pitching Coach Steve McCatty told the Washington Post's James Wagner that this year's velocity may actually be more in line with what it was during most of the right-hander's minor league career before everything "clicked" for Jordan in 2013. 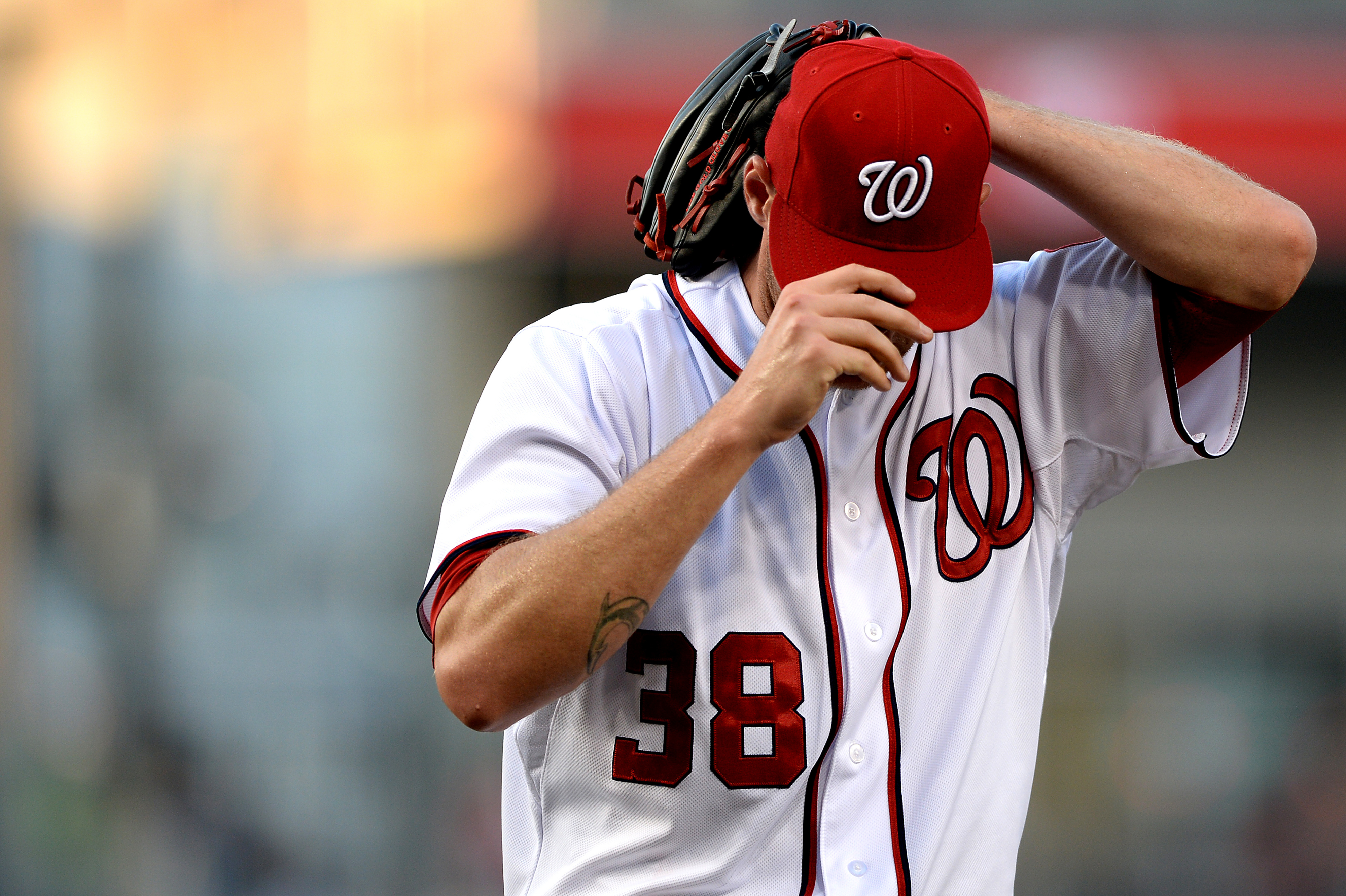 With Doug Fister's return looming, however, and Tanner Roark pitching like he did on Saturday, the pressure of keeping his spot in the rotation could be affecting Jordan too, McCatty suggested, before recommending Jordan just concentrate on what he can control.

Fister makes his first minor league rehab start this afternoon, with at least one more minor league start likely before he's ready to make his Nationals debut, barring any setbacks or delays. Jordan gets another chance to state his case for remaining in the majors this afternoon against San Diego.

[ed. note - "This story is from today's post game thread, but seemed like a fit stand-alone piece as well, so check back for the updated version after the game."]