There was plenty of content left over after the last week in the nation's capital, so while the Washington Nationals are off today, we went back through the archives to pull out whatever of interest was unused, edited out or missed. Nats talking Nats...

Throughout the homestand there are daily interviews before and after every game. We collected a total of around an hour and twenty minutes of audio, most of which makes its way into stories that are posted here throughout the day. Of course, not all of what is said makes it into print, but we do tend to transcribe it all...

So with the latest 11-game homestand over and the Washington Nationals off today before the start of their two-game set with the Houston Astros tomorrow night, now seemed like a good time to go back through the archives and see if there was anything interesting left over, either unused or clipped out in the editing process.

Here's some off day reading from the last week...

"What I've seen so far is that he developed that approach in Spring Training and stuck with it and he's working hard every day to maintain it." - Matt Williams on Danny Espinosa so far in 2014

So far this season, Nats' infielder Danny Espinosa has a .278/.338/.458 line with five doubles, a triple and two home runs in 78 plate appearances. He's playing more often than expected early with Ryan Zimmerman on the DL. Matt Williams talked last week about the way Espinosa's battled back after a lost season in 2013:

"I just think he's sticking with it. What I've seen so far is that he developed that approach in Spring Training and stuck with it and he's working hard every day to maintain it. What's impressive about all of that to me is that his ability left-handed to hit the ball to the left-center field gap and his ability right-handed to do the same to the other gap is key for him."

"Again, he's got all kinds of ability, right? If he gets on base, he's got the ability to go to second base on a steal. We can put him in motion, he's aggressive. Balls in the dirt, those types of things. That's the player he is. He can also hit the ball over the fence, but that's not his concern right now. His concern is base hits and getting on base and helping us create opportunities. And he's going a great job of it."

Current scene at #Nats Park, where the start of Game 2 of 4 with the #Padres has been delayed... pic.twitter.com/aX3M1vrpTC

We spoke to 26-year-old right-hander Aaron Barrett before Wednesday's game. Barrett struggled on the mound on Sunday, issuing two bases-loaded walks. Through nine games and 7 2/3 IP so far, the surprise presence in the Nats' bullpen has a 1.17 ERA, a 2.17 FIP, five walks (5.87 BB/9) and 11 Ks (12.91 K/9). He made his MLB debut in the 9th inning of the Nats' season opener with the Mets in New York and ended up earning the win when the Nationals went ahead in the tenth after battling back to tie it in the top of the ninth. Here's how Barrett remembered his debut:

"I was going to get my debut we were losing by two runs. And then we tied it up and I'm sitting there in the bullpen and starting to think, 'I still might get a shot.'" - Aaron Barrett looking back on MLB debut

"I was warming up in, I think it was the seventh inning, we were losing 4-2 initially, so I was going to get my debut we were losing by two runs. And then we tied it up and I'm sitting there in the bullpen and starting to think, 'I still might get a shot.' So it was a tie game and there were some righties coming up, so I think Skip had confidence with some righties coming up it didn't matter and I'm just glad that I was able to take some deep breaths and really embrace it all and Ian Desmond and Adam LaRoche made sure they came out and made sure I enjoyed that Opening Day and that first experience in the big leagues and that was just a moment I'll never forget."

Barrett on if he notices national attention, people saying he has closer stuff: "I mean, not really. I try not to focus too much on that. I mean, that's way down the road in the future. We've got a great closer right now in [Rafael] Soriano and he's been doing it a long, long time. I did it in the minor leagues, which I think has helped me prepare for major league hitters, but right now my focus is to get guys out. I'm not really worried about that type of stuff. Yeah, it's great that they would consider that, but I focus on the present moment and just try to get better every day.

"That's why he's our three-hole guy. He's the guy when the game is on the line you want him up to bat." - Gio Gonzalez on Jayson Werth after game-tying hit vs LAA

Matt Williams talked about the Nationals' ability to come from behind so many times early this season.

They've come back to win seven times in the first 26 games. Williams said he doesn't think they'll have to keep doing it:

"I don't think we'll have to. I think it's just something we're going through right now where we're getting down early in games."

Gio Gonzalez talked about Jayson Werth after Werth's game-tying two-out double in the ninth of Wednesday's comeback win over the LA Angels. Werth hit the double, then scored the winning run on Adam LaRoche's walk-off single:

"That's why he's our three-hole guy. He's the guy when the game is on the line you want him up to bat. And he was in the perfect situation for it and he came through and so did [LaRoche]."

Werth on asking Ian Desmond about Ernest Frieri before hitting the aforementioned double since Desmond hit a home run off Frieri in the first game with the LAA:

"Everybody in the dugout went over to Desi and asked him what he had on him. He hit a home run off him last night. Desi was just running his mouth a little bit..." - Jayson Werth on asking Desmond for advice on Ernersto Frieri

"I feel like everybody in the dugout went over to Desi and asked him what he had on him. He hit a home run off him last night. Desi was just running his mouth a little bit so that kind of got us going. It was good. I like the way we're playing."

Williams on winning replay call vs Padres in the ninth inning of Thursday's game much to Bud Black's chagrin: "It would be better if we won the game. There was some question from Buddy whether [Jedd Gyorko] had been in the box and they put the game back in play, but I got out there as soon as we could determine whether it was an out call and yeah, it's nice to have one go our way."

Williams on continuing to create opportunities which will, in theory, lead to more runs though one wondered at times during the homestand (see 0 for 16 w/ RISP vs LAA on Thursday): "The theme is the same as it always is, we just try to give ourselves as many opportunities as we can. I think Anthony and Desi certainly set the tone tonight. Taking the ball the other way against a left-handed pitcher and staying on it. That sets the tone for your team. They both did a nice job of that. [LaRoche], of course, continues to swing it well and [Bryce Harper]. [Jose Lobaton] is getting a lot of hits for us. It's good. We just keep getting guys out there and see if we can get them in. Those opportunities are key though."

Leftover LaRoche on strong start: "I feel good. I feel a little bit more quiet at the plate. And really worked on that in spring."

"It feels good right now. It's always easier when guys are hitting around you. But that kind of thing can be contagious."

Williams on early-season errors, defensive issues including two errors by Anthony Rendon: "I'm baffled. First of all, the ball that [Mike] Trout hit, that's a hard ball. And Anthony had five or six of them tonight. Balls that were hit extremely hard. Handled the rest of them. I think he rushed a little bit, misplaying the ball initially with Mike up there. We know he runs well, and he rushed it a little bit and pulled the ball to his left. And then the next one, I don't know. I think the infield is dry even with the rain, they had the tarp covering it, I don't think there were any issues with grip on the baseball. The ball just sailed on him. So what do you do? Well, we just keep doing what we're doing. We work at it, and we work at it every day. And we do extra and we do all those things. It's not what we want, for sure, but we can't do anything but do what we're doing and that's work at it."

Current scene at #Nats Park, where the start of Game 2 of 4 with the #Padres has been delayed... pic.twitter.com/aX3M1vrpTC

Williams on starters struggling in early innings, possibly adjusting pregame preparation: "No. I mean, we've talked about it. Nothing's changed. From a pitching perspective warming up in the bullpen hasn't changed over the last three years. And there's no reason to make a drastic change. It's a question of, tonight anyway, ball's being up in the strike zone and you make mistakes at the big league level, you're going to pay for it." 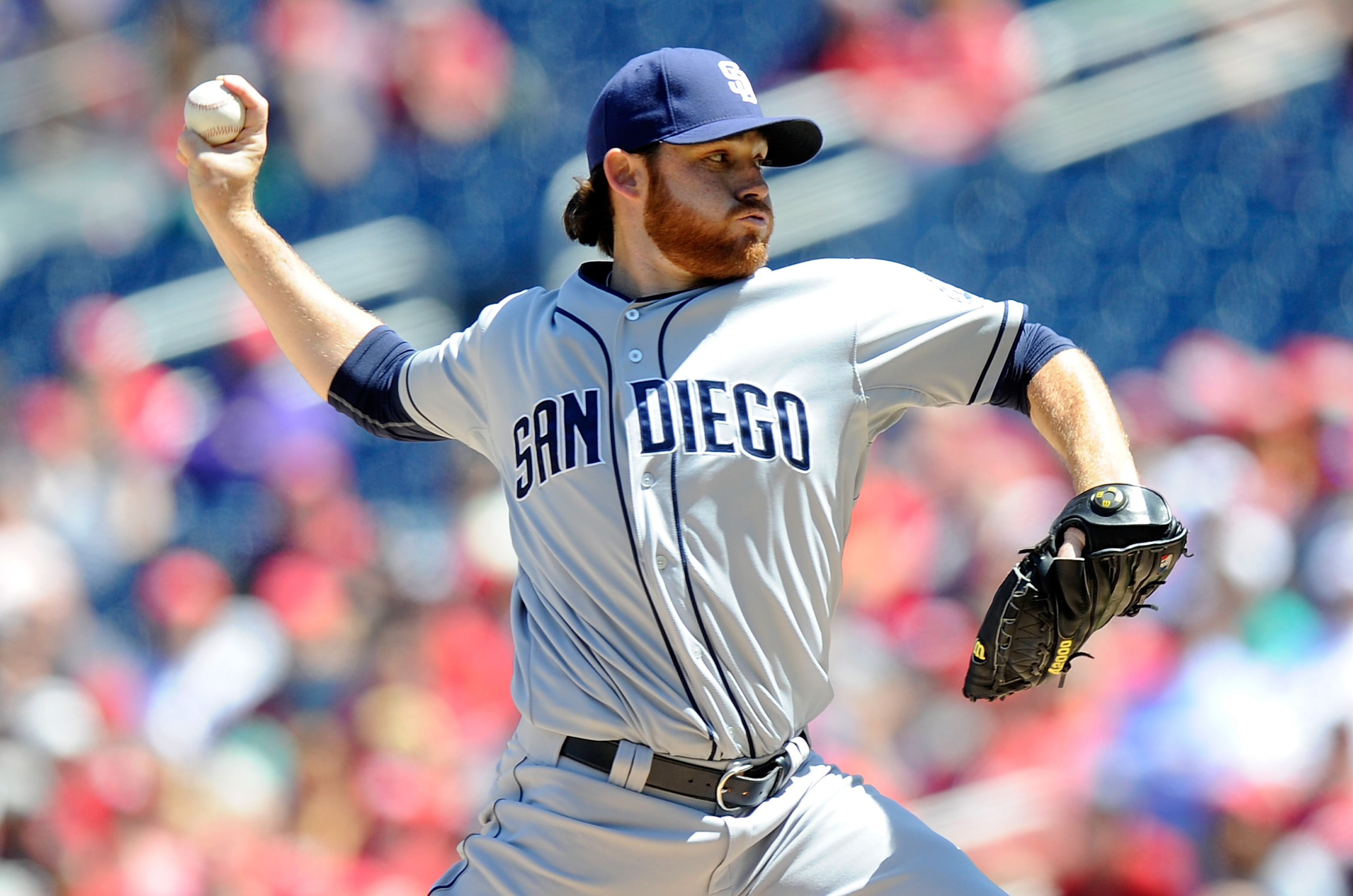 Williams on comeback victories wearing the team down: "Of course we don't want to have to come from behind, that's for sure. We've done it, but it's not ideal by any stretch so we just have to do a better job of getting back to the dugout and let our offense go to work. Over the course of multiple games or a whole season, it's very difficult to come back that many times and it wears on you a little bit. So, we've got to do a better job of getting out of the first or the second and letting our offense go to work a little bit."