According to a report by MLB.com's Bill Ladson, the Washington Nationals will option right-handed starter Taylor Jordan to Triple-A Syracuse. Ladson cites two sources who say Ryan Mattheus will join the Nats in Houston with Jordan going down...

Taylor Jordan and Tanner Roark battled for the fifth spot in the Washington Nationals' rotation this spring. The addition of Doug Fister in a trade with Detroit gave the Nats an impressive top four of Stephen Strasburg, Gio Gonzalez, Jordan Zimmermann and the 30-year-old former Tigers' right-hander and the plan was to fill out the final rotation spot with either Jordan, an '09 9th Round pick who came sort-of out of nowhere last season to make his MLB debut or Roark, a 26-year-old former Texas Rangers' prospect whose major league debut in 2013 capped off his own breakout season.

"I'm happy to go to Triple-A. It's still a bump up for me. I've never even been to Triple-A." - Taylor Jordan to reporters during rotation battle this spring

Jordan admitted toward the end of the Grapefruit League season that the pressure got to him at one point this spring, but he said he eventually accepted that all he could do was make the best impression possible and then see what the Nationals decided. If he ended up starting the year at Triple-A, even that was a step up he reasoned, since he rose from High-A to Double-A and the majors last summer, skipping the Nationals' top minor league affiliate.

"I'm happy to go to Triple-A," he told reporters. "It's still a bump up for me. I've never even been to Triple-A. Like I said last year, it was just a blessing to be up in the big leagues, I don't expect anything."

When Fister ended up landing on the DL with a minor right lat strain both Roark and Jordan made the Opening Day rotation and Jordan began his second major league season with a strong start against Atlanta that saw the 25-year-old right-hander give up six hits and one earned run in 6 1/3 IP in a 2-1 win over the Braves in which he received no decision. After that outing, however, Jordan struggled, giving up 28 hits and 19 runs, 15 earned (6.98 ERA) in four starts and 19 1/3 IP over which opposing hitters posted a .322/.375/.529 line.

"Right now there's no change. Today [Jordan] just didn't feel well... for the first three innings, he used his changeup a lot and got them to roll over..." - Matt Williams on Taylor Jordan vs Padres on Sunday

Jordan was lifted from his fifth start of the season this past Sunday after just four innings. Nats' skipper Matt Williams said afterwards that the starter was sick and weak from the start, which explained a further drop in the sinker-balling pitcher's velocity, which was already down from what it was last season. In spite of Jordan's struggles, however, the first-year manager said he didn't foresee any immediate changes in the rotation aside from giving each starter an extra day of rest since the two off days in the schedule this week allowed it.

"As of right now, we're giving everybody an extra day," Williams said. "So, with the off days, we can do that. So right now there's no change. Today [Jordan] just didn't feel well. So, for the first three innings, he used his changeup a lot and got them to roll over and pitched his way through it but we couldn't let him go any further. He just wasn't feeling well at all."

With Doug Fister making his first of two expected rehab starts on Sunday, however, on the same scheduled as Jordan, a decision on the rotation was coming one way or another in the next week or so barring any setbacks or issues with Fister. According to a report from MLB.com's Bill Ladson last night, the Nationals made the decision to option Jordan to Triple-A Syracuse. 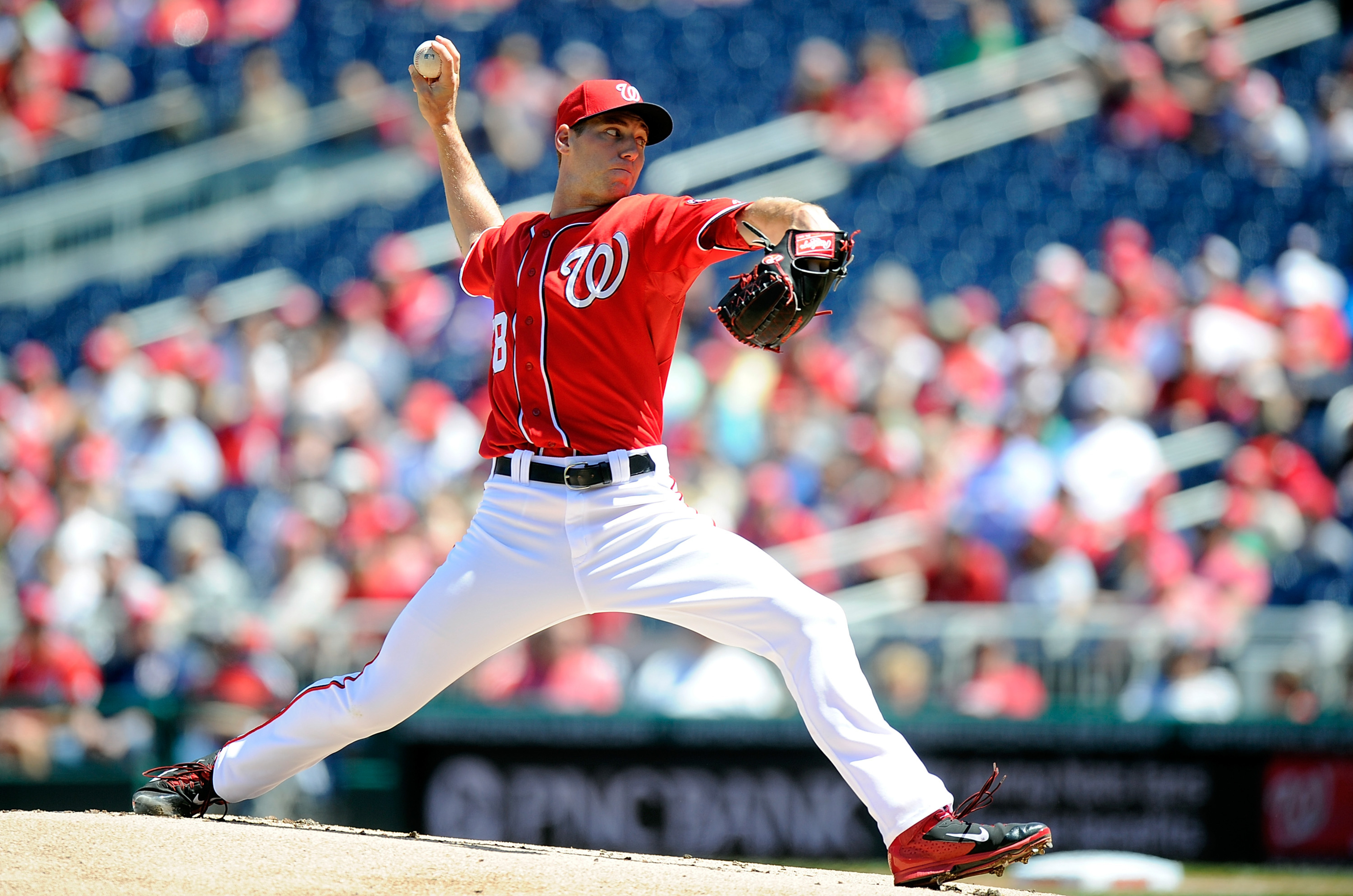 Citing two sources, but noting that the Nationals made no announcement, Ladson reported that Ryan Mattheus will be called up to join the Nats in Houston with Jordan going down to Triple-A.

Washington Post writer Adam Kilgore was the first to report that Mattheus would join the Nationals in time for the two-game set with the Astros, though he wrote at the time that the corresponding move was not clear.

There is still no official word from the Nationals as of this moment...