Matt Williams, Mike Rizzo and Taylor Jordan agree. Yes, the Washington Nationals' right-hander's velocity is down this season, but more importantly, he needs to get back to keeping his sinker low in the zone if he's going to be successful.

Share All sharing options for: Nationals and Taylor Jordan more concerned with command than drop in velocity

Through five starts before he was sent to Triple-A Syracuse on Tuesday, 25-year-old right-hander Taylor Jordan showed a significant drop in velocity. Jordan's two-seamer sat at an average velocity of 91.4 mph during his first stint in the majors last summer, but was down to 88.9 mph early this season. His four-seam fastball too dropped from 92.3 mph to 90 mph. Asked last week if he was aware of the change or had discussed the decreased velocity, the Nats' '09 9th Round pick said he was aware, but was more concerned with his command.

"If I can get my sinker in the location that I want it, then velocity shouldn't really matter too much." - Taylor Jordan on velocity drop vs command issues

"I don't know what the cause of it is," he said of the drop in velocity, "but if I can get my sinker in the location that I want it, then velocity shouldn't really matter too much."

Nationals' Manager Matt Williams expressed the same sentiments in discussing the long balls Jordan gave up in his start against the LA Angels, which saw Albert Pujols take him deep twice for his historic 499th and 500th career home runs.

"Generally, when he's good, the ball is sinking," Williams told reporters who asked what was going wrong this season after Jordan burst onto the scene last summer, working his way up from High-A Potomac to Double-A Harrisburg and eventually the majors in his first full-year back following Tommy John surgery in 2011.

"Generally, when he's good, the ball is sinking... the changeup is down, out of the zone, breaking ball is down." - Matt Williams on Taylor Jordan's struggles

"The changeup is down," when he's on, Williams continued, "out of the zone, breaking ball is down. But over the last couple, the ball has been elevated. And like I said, if you get in those situations with guys like Pujols, you're going to pay for it and he did tonight. I mean, the balls were just up in the strike zone."

In an interview with 106.7 the FAN In D.C.'s Grant Paulsen and Danny Rouhier today, Nats' GM Mike Rizzo too talked about Jordan getting his command back when he reports to Triple-A Syracuse after he was optioned out yesterday.

"He certainly didn't command the baseball like he was last year," Rizzo said.

"As a sinkerball pitcher, no matter if you're pitching at 90-91 or 86-88, you still need to be at the bottom of the zone with your sinker bottoming out. So, he's a sinker/changeup guy, his velocity is down a tick from where it was last year, but more importantly, he needs to get back to commanding the baseball and commanding the sinker.

"He's a sinker/changeup guy, his velocity is down a tick from where it was last year, but more importantly, he needs to get back to commanding the baseball..." - Mike Rizzo on Taylor Jordan on 106.7 the FAN in D.C.

"And that's his lifeline, is commanding that pitch and if he doesn't, high sinkers go a long way as you well know. He needs to pitch down in the zone."

In spite of the fact that he was sick with a fever and headache, Jordan managed to throw four strong innings in his last start this past Sunday against the San Diego Padres in which he gave up just one run on four hits. Williams praised the right-hander's work while he was on the mound and the effort that he was able to give the Nats.

"He used his changeup a lot and got them to roll over and pitched his way through it but we couldn't let him go any further," Williams said. "He just wasn't feeling well at all." 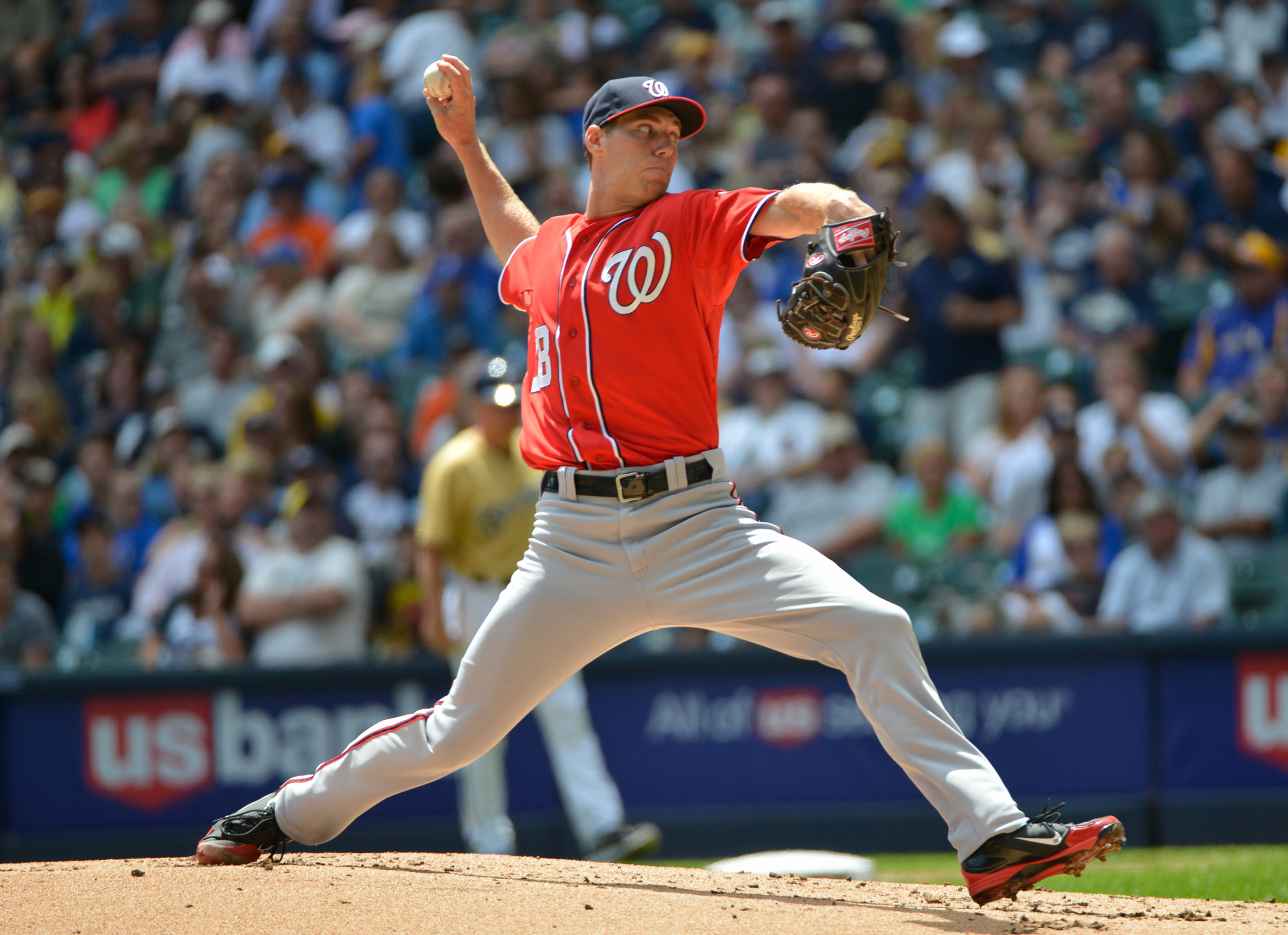 "The fastball velocity was way down," Williams acknowledged, further than it had been in previous starts, but the Nats' skipper chalked that up to the illness, saying Jordan was, "... weak out there," and, "... he gave us what he could give us today."

Jordan will make his first start at Triple-A when he gets back on the mound with the Syracuse Chiefs, and he's going down with a clear idea of what he needs to sort out as he tries to work his way back up.

• Listen to the entire interview Mike Rizzo did with Grant Paulsen and Danny Rouhier HERE.