The Struggles of the Nationals' Shortstop Ian Desmond

Ian Desmond hasn't been the 2012 and 2013 performer that Nats' fans are used to. While his defense has been shaky, we look here at his offense to see what has changed this year, and what the problem might be.

Share All sharing options for: The Struggles of the Nationals' Shortstop Ian Desmond

In 2012 and 2013, Ian Desmond contributed a lot of value to the Nationals through great hitting and defense.  Whether it was more seasoning in the major leagues, the faith of his manager and general manager, or daddy strength, Desmond lived up to -- and perhaps exceeded -- lofty expectations.

Many fans justifiably expected 2014 to be a continuation of his hard-hitting ways. Sure, there was some mumbling of risk, but fans still projected him to put up a .286/.335/.468 line. Hitting behind Bryce Harper, Ryan Zimmerman, Jayson Werth would present Desmond with plenty of opportunities to do damage.

Unfortunately, most of Desmond's damage has been friendly fire: With the bat, he's performed 28% worse than the major league average hitter, compared with well above-average performances in '12 and '13. And defensively, he's posted a negative UZR and DRS. Never mind too that he's third in the league in errors.

Offensively, What Has Changed?

There are two parts to this, I think. The first is what the numbers tell us, and the second is what our eyes tell us.

Numbers-wise, there are plenty of differences between 2014 Desmond and the vintage of his last two full seasons.  Here's a chart to compare 2013, 2014, and his big league average across several of these categories:

Pretty easy story to tell here. Desmond is swinging more on pitches outside of the zone, hitting them less frequently, and that's leading to more whiffs and strikeouts. His zone contact percentage is down too, as (obviously) is his line drive rate. And with line drives goes the BABIP, and with the BABIP go the extra base hits that drove his wOBA up last year (.341 in 2013, .278 this season).

So what's going on here?  Sure, it's simple to chalk up Desi's problems to an increased willingness to extend the zone and decreased ability to make contact outside of it, in addition to problems barreling the baseball. I think two examples from Monday night against Josh Collmenter show a subtle difference in successful Desmond and unsuccessful Desmond.

Obviously, this is "unsuccessful" Desmond. It's a cut fastball that doesn't really do much sits right across the center of the plate, elevated for Desmond to crush. Yet:

Look closely at how Desmond's massive hack causes his lower half to flail towards third base, most obviously with his leading left leg -- watch his cleat torque outward suddenly. While this isn't such a big deal on an inside pitch (see here for an example), this offering is closer to the middle of the plate, and up. He's taking an inside cut when the ball starts and ends middle-up.  I wonder if he isn't sacrificing some contact ability here.

More importantly, Desmond is late on an 88 mph cutter. Here's a freeze of the ball already having crossed the plate, and Desmond getting through the zone too far behind: 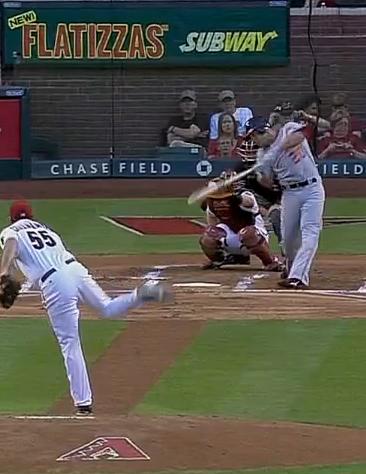 The ball is by him, and with it, a chance to do damage on a hittable pitch.

Here's Desmond giving the lead back to the Nats on a two-run home run. Collmenter's change up was middle away, and Desi knew what to do with it:

Desmond's a little early on the offering, which is good in some ways here, because he's down, set, and not rushing to clear through the zone like before. Note how quiet his front foot is through contact and how his upper body and head stay committed with the pill throughout. The result is a blistering shot to left-center. Impact looked like this: 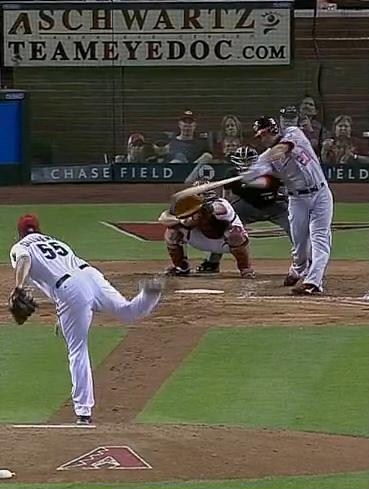 There is still a warning sign or two here. Primarily, Desmond again tried pulled around the ball despite the outside location -- in other words, it's a good thing it was a change up. But it seems Desmond is rocking a bit of a more pronounced pull habit on most all pitches this season, as the below chart indicates.

He's still going back up the middle with hard offerings regularly enough I suppose. However, pitchers are throwing him that stuff less frequently than ever, down to 58.4% from last season's 63%. Pulling pitches is the most common way hitters generate power, but pulling off pitches is the express route back to the bench.  It's impossible to conclude based on the above two at bats whether Desmond is effecting an excessive pull bent, of course.  But when Desmond gets to a hitting position in time and reacts by staying on the ball, good contact seems to result.

Desmond has struggled early this year, particularly with hitting pitches both inside and outside the zone. That's led to an uptick in whiffs and strikeouts. And his timing, swing intensity, and increased pull approach (these could well be related) have negatively affected his ability to barrel the ball with authority.

Could there be other issues? Surely.  Collmenter's pitch choice and location worked in Desi's favor, for example.  But even on his triple last night, the shortstop showed an improved swing tempo and willingness to drive the ball where it is pitched.

If Desmond can improve on fundamental batting components like timing and field approach, he has the talent to help the Nats weather their offensive injuries.  I'm hopeful that he'll build on recent progress.