While the Nationals have had an impressive early season offensive performance, there's a sense in the community that the team struggles to drive runs in with runners on base. Is that true? And if so, why?

Share All sharing options for: The Nationals' Sort-Of Jekyll and Hyde Offense

Think about this for a second: The Washington Nationals are ranked 9th in Major League Baseball in runs per game (at 4.5), all while Wilson Ramos and Ryan Zimmerman have missed significant chunks of time. Look at just National League teams, and the performance becomes more impressive, where only Colorado (5.4 per) and Miami(!) (4.6) lead the Nats.

But if you've hung around a few game threads -- or heck, just simply watched a few games -- you might notice that D.C.'s bats don't seem to be driving runners in all that often. The tease of the Nats' runners left on situation is no illusion: According to Baseball Reference, the Nationals are tied for second most runners stranded in baseball, at 216. It looks a little better when you look at it by percentage: 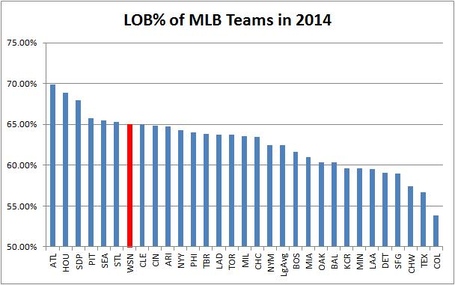 On the one hand, then, you've got a pretty impressive offense by runs scored. On the other, the good guys are stranding a lot of potential runs on the board. There's a pretty simple answer for why, but with a few interesting wrinkles.

Situational hitting can make or break baseball games and, in some cases, seasons. So far, Washington has torn the cover off the ball without runners on base, and yet struggles with runners on. Here's a chart with some core numbers to compare:

The Nationals perform 24% better than the average major league ballclub with no one on base, and are about 10% worse than the mean once a batter reaches base or scoring position. It's a little weird.

Despite the relatively disappointing performance with runners on, D.C. is nonetheless getting on base more often than almost any other team when the sacks are empty. This is how you can place near the top of the league in runs scored and other metrics when you stink at getting those guys around: There are so many runners on, even a below average conversion rate can yield favorable counting numbers. Again, it's not the most traditional way of accumulating runs (and can frustrate us fans), but it's working so far.

There are a few reasons for the difference, I think. First, let's check out how different batting order positions are getting on base, courtesy Baseball Reference: 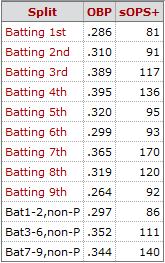 What you see here is that when the best Nats' hitters are getting on base, they are followed by hitters with OBPs like .299 (mostly Ian Desmond), .264 (pitchers hitting 9th), and .286 (mostly Denard Span). So, getting on base is no problem, it's just the relative on base talent after that that is problematic. It might be tempting to think this is a lineup construction issue, but keep in mind we're just looking backward, and that it's hard to definitively project based on this information how certain players will do going forward.

Related to this point, Desmond, Danny Espinosa, and Jose Lobaton account for 27% of Washington's at bats both when runners are on base and in scoring position. That's a significant amount, although I confess I don't know if that is the highest percentage for any three Nats' regulars. Anyway, here's how they are doing by situational sOPS+ (100 is average, and higher is better): 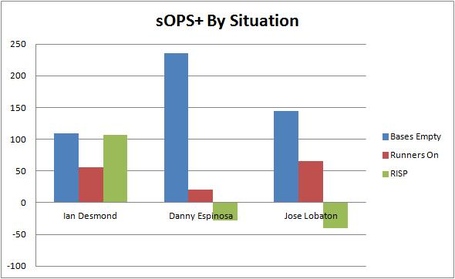 These two points, in sum: the lineup isn't sequencing efficiently, and the hitters who take a sizable number of PAs with runners on and who are positioned behind the so-far reliable middle of the order aren't "clutch" (if clutch existed).

As Dave Cameron wrote last year, you can learn a lot about an offense from looking at how a team sequences their hits, creating more (or fewer) runs based on situational differences. There are two parts to viewing how a team sequences its hits, Batting Runs and RE24. Batting Runs offer a window into how a player performed based on a neutral base/out state -- a home run is a home run, whether it is a solo shot or grand slam. Zero is average. RE24 adds this context in, giving a player more credit for a grand slam than a solo tater.

Keeping that in mind, here is how the every team in the MLB stacks up through April when viewing runs gained or lost through sequencing:

There's one reason why the Mets and Marlins have been moderate early-season surprises: They are sequencing the heck out of their offensive performance. And as far as the home team goes, we see that Washington has added added about 6 runs to their performance this season by their situational hitting.

But based on the team's below average performance with guys on, how can they have actually added runs at roughly the league average rate? The team has popped 10 of their 29 homers with a base or bases occupied, which is about the major league average for round trippers with batters on. So one possible explanation -- that they are simply knocking it out of the park when they do get hits with bases occupied -- seems to be out.

It's possible that the team is going first to third and second to home on the occasions they do get hits. And what do you know! The Nats are near the top of the league in Baseball Prospectus' Base Running Runs stat ("Base Running Runs measures a player's contributions on the basepaths based on activity during the run of play, on stolen base attempts, from tag-up situations, and other advancement opportunities"), placing second in the league with 10.7 runs above average.

This starts to paint a more clear picture of the team's offensive performance: great with getting guys on, bad at getting them around -- but when they are connecting for hits, they are benefiting from often having runners on and from good base running.  That's how you bat poorly situationally (so. many. adverbs.) and still sit in the top 10 in runs scored in baseball. Also, hitting a lot of home runs helps.

It's actually been a pretty great offensive start to the year for the Nats, especially considering injuries and the relatively disappointing performance with runners on. However, while that might not be "clutch" to some (or most) fans, there's something to be said for being exceptional in the majority of plate appearances to mitigate those affects, as well as being heads up on the bases. If you know you can't hit well with guys on, you may as well be "clutch" with no one on to make sure you're giving yourself every opportunity to convert the most meaningful counting stat in the game, runs scored, when you do get those timely hits.

Without looking at individual batter profiles, I suspect the distribution will even out as the performance of guys like Espinosa and Desmond improves with hitters on over the rest of the year. Health will also play a big role, too. But four games over and no glaring offensive issues on a team-wide basis, with reasonable room for improvement?  Sign me up.

Thanks to Baseball Prospectus, Baseball Reference, Fangraphs, and ESPN for statistics.