While other N.L. hurlers like Johnny Cueto and Adam Wainwright are having excellent years, Nats' ace Stephen Strasburg is having a great season himself. Indeed, despite the first inning curse that has plagued him so far this season, hardware could follow.

Here's a game that a lot of internet baseball writers like to play; you already know from the headline who one of these players is, but what the heck.  Below is a comparison of three starting pitchers since 2010:

Player A is Clayton Kershaw, Player B is Stephen Strasburg, and Player C is Felix Hernandez. Undoubtedly, this is great company for a 25-year-old starting pitcher. It is therefore somewhat difficult to believe that, if comments on game threads are any indication, there's some disappointment with his performance (I'll rest on Rob's characterization from earlier in the year for that point). It's almost certainly the minority of fans, of course, but Washington really has one of the elite hurlers in the game.

But let's see if the detractors have point. One of the elephants in the room: for his career, Strasburg has never thrown more than 183 innings in a season, and since 2010 has tossed just about half the innings total of his counterparts listed above. Tommy John surgery in 2010 and an innings cap in 2012 help explain his relatively low inning totals.

Something of a related point is the criticism that Strasburg doesn't work deep in games; over his first five campaigns (including this year), he's tossed about 5.8 innings a start (or, a bit over 5 2/3 innings per). However, Kershaw only averaged 6.2 innings pitched per start over his first five seasons. Combine that with the D.C. twirler's injury history, and while the observation that Strasburg doesn't eat innings in any one game is legitimate, it's somewhat mitigated.

Second -- and more relevant to the current season -- Strasburg has struggled mightily in the first inning this year. For his career, opponents have hit to a .664 OPS during their first at bat. Actually, that's 16% worse than his normal performance, so fans might have expected some level of early-game difficulty. This season, the bad guys are teeing off to the tune of a .933 OPS.  Which one of the below does not look like the others? 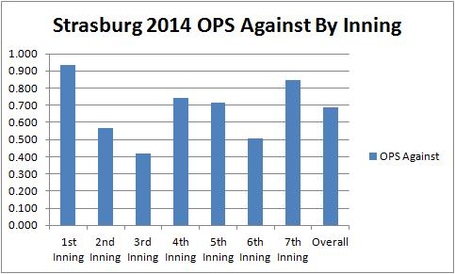 As Patrick wrote earlier this month, General Manager Mike Rizzo has his thoughts on what's going on:

"The thought process against [Strasburg], as I talk to other teams around the league," Rizzo continued, echoing what Redmond said about the Marlins' approach, "is that you've got to get him early. You've got to hit his fastball because if he gets ahead of you at two strikes, he's got two wipeout pitches to go to and it's really -- if you don't get him early in the count and early in an at bat he's very difficult to get."

It's a good strategy. If you know your foe is good at getting ahead, which Strasburg is (3.5% more than the average big leaguer this year), then take advantage of his strike-throwing proclivities. And, also as Patrick stated, hitters are indeed doing so -- 24% of first-pitch contact is going for line drives, helping to fuel his .438 BABIP on those cases.

Let's focus on Strasburg's first inning woes for now. According to the excellent Baseball Savant, the former Aztec has thrown 174 first inning pitches this year. Of those, 79, or 45%, were in the strike zone. This zone percentage is actually a little less than his zone rate for the year (~49%), so it's not like Strasburg is firing 'em in there every pitch early on.

But as you can see from the graph below, when he does enter the strike zone in the first, it's not really at the edges -- it's often right down the middle (with darker shades of red indicating greater frequency; view from the catcher): 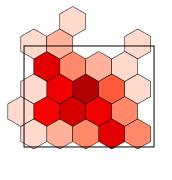 That's not where you want to work, no matter how hard you throw.  And Baseball Savant again shows us what guys are doing with first inning pitches in the zone: 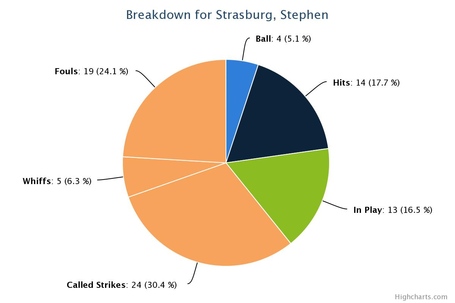 It may not be immediately apparent, but when batters put strikes in play in the first inning, they are more likely to get hits than outs. That's just insane. And in case you were wondering, it's also contrary to his zone results for all innings, where in play outcomes (usually outs, although with the Nats' D...) exceed hits.

Too Many Early Fastballs?

Bringing Rizzo's observation and Strasburg's troubles in the first inning together, the Nats' ace may simply be tossing too many fastballs in locations that are too hittable. Check it: 78.4% of his first inning offerings are hard stuff -- mostly his four seam fastball (50%). Every other inning? Just 61% hard stuff.

Another aspect to consider: Strasburg gave up this home run on a 2-2 count (indeed, all three of his first inning homers have come at even or behind).  For the year, the young hurler is getting first strikes about 63% of the time. In the first inning? He's working ahead of 56.8% of batters. It's a small difference, sure, but it might explain why he's getting predictable with his pitches and location.

One solution that I'm sure is obvious to Strasburg himself is to work ahead in the count. So, work ahead and mix things up? Make Giancarlo Stanton look bad:

Stepping out from the comfort of numbers in my mom's basement for a second, I'm wondering whether the mantra of "establish the fastball" is working against Strasburg.  First of all -- and I understand the notion behind it -- but what does that really mean?  Strasburg doesn't need to establish his fastball; it's hard, it moves, and he generally can put it where he wants it.  We've known that since he debuted in 2010.  Major league hitters surely know that, which I'm guessing explains their aggressive approach.  So why afford batters the luxury of predictability early on?

Second, to the extent "establishing the fastball" early puts in hitters' minds that Strasburg can throw it for a strike later in games, is that actually true?  I haven't done a regression on it, but the relationship between first inning fastball strikes and fastball strikes later in the game can't be tremendously significant.  Even if it is, causation isn't apparent: The pitcher could just be good overall.

More understandable is concept of "getting a feel" for a pitch.  That's a perfectly fine thing to do in the bullpen, but as we've seen, it can cause problems in a game setting.  And that's only sort of related to establishing a heater.  Anyway, there's no doubt that Strasburg has the stuff to turn an order over three times.  Perhaps he pitches one batter in the first inning a little backwards, running early strikes up with breaking and offspeed pitches, while the batter is the predictable one ("leadoff man should see a lot of pitches").  In this respect, it will be interesting to see how he approaches Texas tonight.

A lot of Strasburg's early game performance seems to be attributed to some predictability and some fluky results; I'm not sure if anyone knows the exact balance between the two, but we know he can control one aspect of that calculus. Facing different types of adversity is also part of any young pitcher's learning curve, especially one who emerged on the scene as late as Strasburg did.

Additionally, all of this is a ton of nitpicking. Strasburg's name is all over various pitching leadboards, from FIP, K%-BB%, change-up value, and N.L. fWAR. Get the sense that he "breaks down" when defensive plays don't go his way? Just one time has he allowed a base runner reaching on an error to score via a hit or walk.

Strasburg is an absolute beast of a talent who is entering his prime. So far this year, it just happens that "baseball" is doing its thing in the first inning. In the end, #37 will be fine, and he'll continue to be a pillar of the team's rotation.  The Nationals shouldn't give him up for any pitcher in baseball.

Thanks to Baseball Prospectus, Baseball Reference, Baseball Savant, Brooks Baseball, and Fangraphs for statistics, and MLB.com for video.