When Denard Span joined the Nationals last season, fans -- and the team -- were optimistic that Span would provide a high on-base, swift running leadoff jolt in front of several talented sluggers, as well as superior defense. Span has lived up to his defensive reputation, and recently put together an impressive offensive run.

To state the obvious, arbitrary endpoints are...well, arbitrary. But as F.P. said on Tuesday night's broadcast -- and as many media outlets have noticed -- the Nationals' Denard Span has been hitting pretty well since late June; from the 17th of that month through Monday night, he's put up a .366/.430/.455 line. Like Patrick noted over at MASN the other day, Span is getting on base, stealing bases, and scoring runs. Just the performance many fans hoped for when Mike Rizzo acquired the former Twin before the 2013 season.

Those who remember the end of last year know we've seen this sort of thing from Span before. Between August 17, 2013 and September 28, 2013, Washington's center fielder posted a .338/.375/.459 triple slash. Since that time, he's been a pretty good player overall for the Nats (to say the least), sporting the 23rd highest fWAR in baseball over the last calendar year. A lot of that value is tied up in defense, granted, but Span's recent offensive performance elevates him into a conversation about the upper tier of players in the bigs.

In reply to Josh Planos' article "Why Denard Span is having a career year" over at the Washington Post a few days ago, one commenter remarked:

Stop acting like this is an anomaly, he had a 29 game hit streak last year, he hits in a streaky and oft injured lineup the only consistent hitter is Rendon and both of them have remained healthy and that is why he's hitting better, in addition RIck Schu has convinced him to tweak his approach just a tad, plus he has a professional attitude and takes his job seriously not that his teammates don't, open up your wallet Mr.Lerner 3yrs/42 million.

It's a reasonable point, to a degree. But not all hot streaks are the same, and there may be reason to believe Span's run since the middle of June, while not reflective of his projected long term talent going forward, is likely closer to "real Span" than that of early/middle 2013 and 2014.

First, let's compare his two streaks. You'll see two spray charts a little bit further below where I've marked a line at the +15 angle (0 is dead center), or roughly from home plate extending through right center field. When Span is going bad, he's rolling over and pulling ground balls from this angle towards first and second base, which are frequently easy outs. For example, here's his spray chart from pre-June 17 this year: 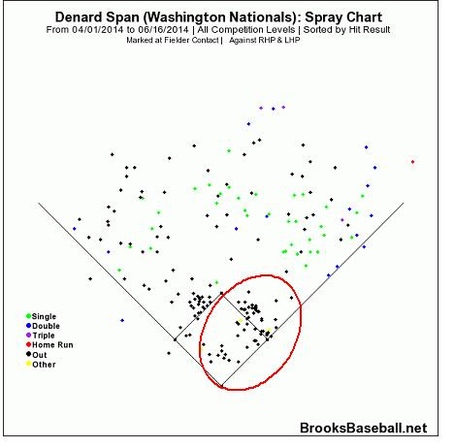 The vast majority of the circled cluster represent ground ball outs, limiting Span's ability to get on base and make an impact. So how does his ground ball -- of note, he hits these more often than any other type of batted ball (53%) -- profile look when he is going good? Perhaps surprisingly, a little different each time: 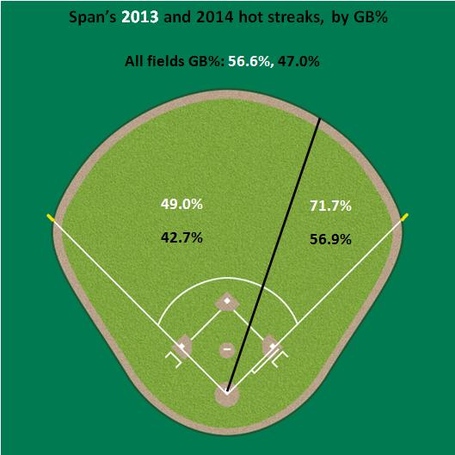 Span's ground ball tendency to the right side was much more pronounced during 2013's sterling performance, and he was also burning a fair number of worms the other way. While hitting 'em on the ground is better for Span than in the air, few hitters can make a career of hitting grounders right to first and second basemen.

But get this. During his 2014 run, Span's hitting almost .300 when pulling grounders: 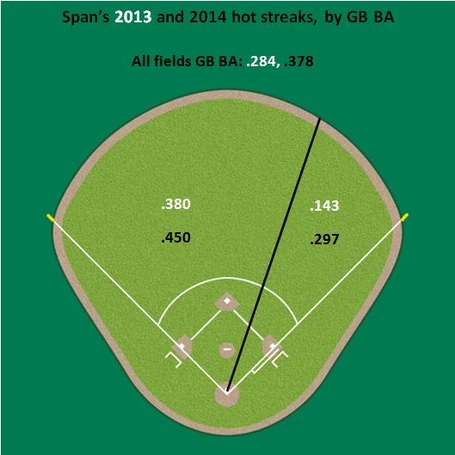 It's not just pulled ground balls scooting through this season; Span is getting on base almost half the time when knocking a grounder the other way. In contrast, when the D.C.-born center fielder went pull-side in 2013, he was putting the ball on the ground more than 7 times out of 10. Considering grounders rock around a .230 BABIP, that was a bit unfortunate, because lefty hitters have better results going pull side than anywhere else (for example, see their .995 OPS this year). So, even during Span's 2013 hot streak, his pull ground ball habits limited his ability to make an even bigger dent against opposing pitcher's ERA.

Of course, Span is certainly benefiting from a good bit of BABIP fortune on grounders, but exactly how much is truly luck is hard to tell. His .297 pull-side ground ball BABIP could merely be a small sample fluctuation, destined to achieve the often-dreaded sabermetric millstone, regression.

Even if (when) it does, there's good news: Span is hitting more line drives this year (23.7%) than at any point in his career, save for his first season in Minnesota. It's led to a higher batting average on balls in play, and more opportunities to score runs. There's not much different in his plate approach statistics or swing/contact profile; yea, he's putting the bat on the ball more, and that's helped maximize the effect of his line drives, but it's not a seismic shift.

Answering why Span is hitting more line drives is challenging.  Often, scouts prefer to see some substantive physical or mental change before changing their view on a player, such as a mechanical adjustment or revised approach.  Is there reason to bet that he will beat the .283/.332/.387 rest of season line projected by ZiPS?

Here are two at-bats this year, one before his mid-June tear, and one during.  Both are against lefties throwing "hard" offerings over the plate. Against Cliff Lee on May 2 -- you might remember this occurring immediately after his "c'mon, man" quick pitch brushback -- he gets a 90 MPH fastball out over the plate, and rolls over to Chase Utley for an out.

Now, here's Span in the fog game against the Cubs from June 26. According to Baseball Savant, this one was a cutter that came in a bit slower and slightly more out over the plate, but nonetheless is still reasonably comparable:

Span's swing -- marked by a little downward bend preceding a load-tap just before he initiates barrel movement and contact -- is generally the same in both gifs. However, on his double, Span's weight is slightly more focused towards his back foot, and his lead leg is rotated inward just so. He's a little more coiled as a result, perhaps affording him a better opportunity to direct his weight, in one movement, forward to attack the baseball. That's just my speculation, though, and two gifs are far from conclusive evidence of adjusted true talent.

In any case, Span has supported his already excellent defensive ability with some real offensive performance this season, particularly over the past two months or so. He's limiting his tendency to roll over on pitches, which burns valuable outs on routine ground balls to the right side of the infield. In place of those, he's added a few more line drives around the diamond, keeping both pitchers and defenses honest.

Whether that is a result of subtle swing adjustments is uncertain.  And he'll probably start "hittin' em where they are[ ]" a bit more often before the season ends. But for now, let's relish in the Denard Span of our prayers: a table-setting, run-scoring, fly-ball killing force of a major league baseball player.

Thanks to Baseball Reference, Baseball Savant, and Fangraphs for statistics.