Matt Williams sticking with Nationals' closer Rafael Soriano: "I'm going to give him the baseball."

First-year Washington Nationals' skipper Matt Williams has no intention of removing Rafael Soriano from the veteran reliever's ninth inning role. If there's a save situation tonight, Soriano will get the ball.

Share All sharing options for: Matt Williams sticking with Nationals' closer Rafael Soriano: "I'm going to give him the baseball."

In 13 second-half appearances, Washington Nationals' closer Rafael Soriano has a 7.71 ERA and a .340/.404/.540 line against in 11 ⅔ IP. Soriano has given up a hit in nine of the thirteen outings and given up runs in five.

After starting the month of August with scoreless outings in a loss, non-save situation and a tie game which the Nats won in extra innings, Soriano earned saves no.s 26-29 in four straight outings with the 27th-29th saves coming in consecutive games from August 13-15th. In two of those three outings, Soriano gave up three hits and one run before locking it down.

After a day off on the 16th, Soriano took the ball in the ninth this past Sunday and blew his fifth save of the season, and he heard boos as he walked of the mound in Nationals Park.

After Soriano surrendered three hits and one home run by Mets' catcher Travis D'Arnaud last Wednesday before finishing up the ninth in Citi Field with some help from his defense, Williams said the ball was just up.

"Just the ball up in the zone. Just up, middle," he told reporters in New York.

"The homer was, he missed location and both base hits up the middle he missed location, so just a little off. Regular work is key for guys, but sometimes in the closer role you don't get it, so, we were able to hold on."

After a drama-free, 1-2-3 frame on August 14th, Soriano gave up three hits and a run but held on for the save and a 5-4 win over the Pirates last Friday night in D.C. Williams defended the work Soriano's done throughout his second season in the nation's capital after that game.

"He's got the job done for us all year," Williams said. "That's three in a row for him, so it's a pretty heavy workload, but he got through it tonight and we'll see how he feels tomorrow, but we had to try to win that one tonight."

Soriano got a night off on the 16th, but returned to the mound this past Sunday and gave up two hits, a walk and three runs, blowing a 4-2 lead.

"Ball is up in the strike zone over the last three or four, and middle of the plate. He hasn't been able to command his slider either." -Matt Williams on another rough outing for Soriano

The Nationals rallied in the bottom of the ninth, however, and ended up winning 6-5 in extra innings.

"Ball is up in the strike zone over the last three or four, and middle of the plate," Williams explained.

"He hasn't been able to command his slider either. The problem is with a bullpen guy, it's difficult for him to work on it in the bullpen because he can be forced into action potentially the next day or that night, but it's just been up in the strike zone."

Williams was clear, however, that he wasn't considering a change in bullpen roles.

Rafael Soriano has gotten 2 straight days off. MW says if there's a save situation, Soriano's his guy. Nats expect him to be sharper w/ rest

"He's been our closer all year and I don't see that changing as of right now," he said.

"Again, he's been up a lot recently, pitching a lot of games and hopefully the games don't present themselves like that and we can give him some rest and give him a chance to cool down a little bit and get back where he wants to throw the baseball. Just been a little off, that's all."

Tyler Clippard got the ball in the ninth on Monday night and he blew his fourth save of the year. There was no save situation last night so everyone in the bullpen but Jerry Blevins got the night off.

"It's a product of how your games are going. So if we get the lead in the ninth inning, you give the ball to Soriano because he's your closer." -Williams on Soriano on MLB Network Radio

Williams has stressed all along that he plans to send Soriano out there to close out games in spite of his recent struggles.

He reiterated that stance this morning in an appearance on the MLB Network Radio show "Inside Pitch" with Jim Memolo and Todd Hollandsworth when he was asked about the challenges he's faced in his first season as a major league manager.

"I think that, with regard to Soriano, he was in five of six games, so it's a product of the way you're playing," he said in explaining the closer's struggles.

"It's a product of how your games are going. So if we get the lead in the ninth inning, you give the ball to Soriano because he's your closer. But it could be that he throws five of six games. And we know, everybody knows, that with relievers, the more you put them out there, the more chance they have of missing a spot or somebody getting a hit or hitting it over the fence or whatever it is. These guys are big league players, they can hit. 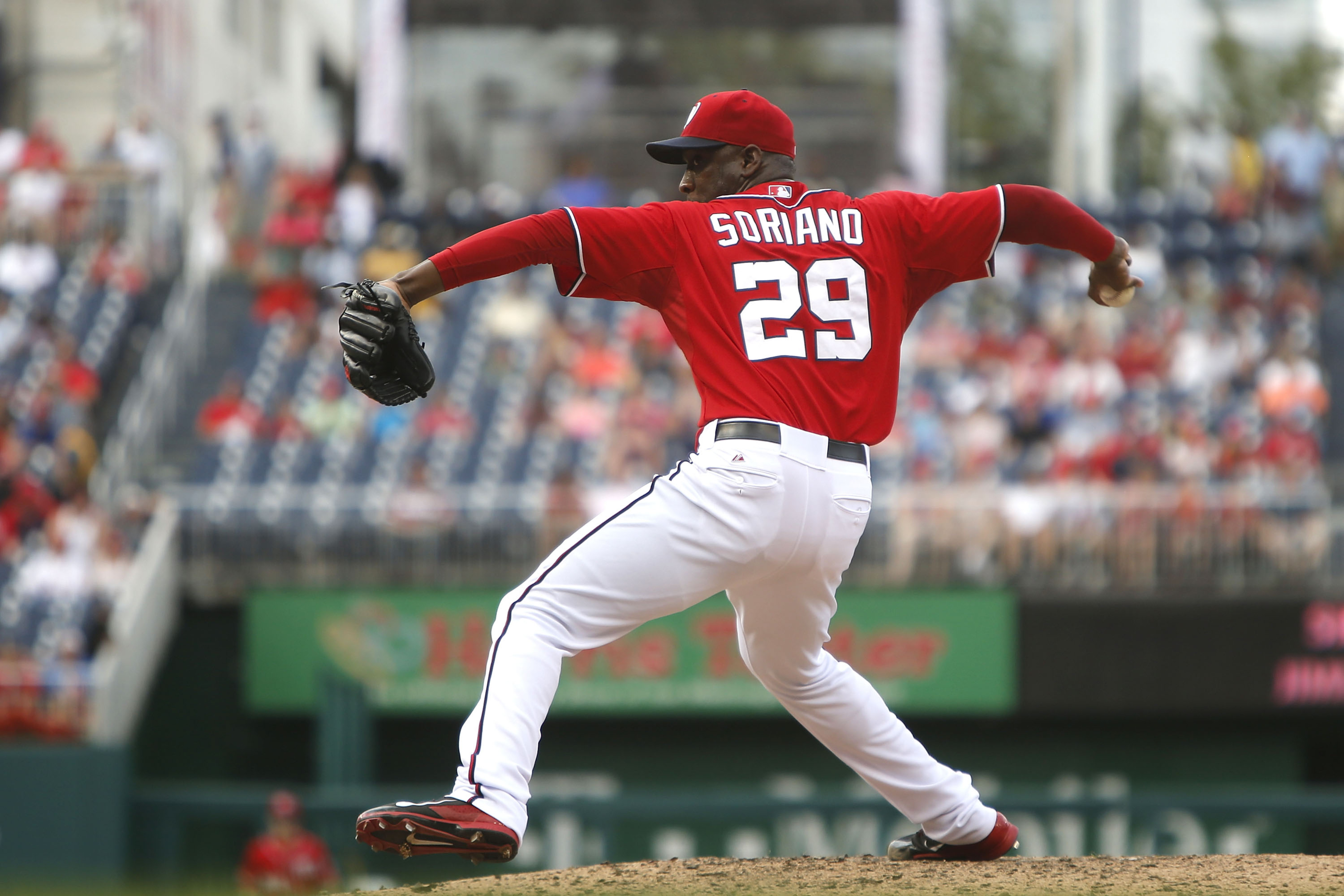 "The other night we used Clippard instead of Soriano because he'd been in five of six games," Williams continued, "so last night I was able to give him some rest, so if we get in a situation tonight where we've got the lead in the ninth inning, he's good to go and I'm going to give him the baseball. When he's got a little rest in-between, he's a lot crisper, a lot sharper. Yesterday he felt okay and today he'll feel much better, so he'll be crisp and ready to go tonight."

After two days off, Rafael Soriano is available tonight, per Williams. (And yes, he says it'll be in the ninth for a save situation.)