Nationals walk off again, lead in NL East at 7.0 games after 3-2 win over D-Backs

The Washington Nationals are one win away from making their manager run around the bases like Babe Ruth. Their fourth walk-off win in five games thrilled the crowd in the nation's capital and stressed their first-year skipper out.

Share All sharing options for: Nationals walk off again, lead in NL East at 7.0 games after 3-2 win over D-Backs

Nine straight wins. Walk-off wins in four of the last five games. 9-1 in their last 10. A 7.0-game lead in the division, which is the second-biggest division lead in the majors, behind only their regional rivals from Baltimore.

They are not, however, taking anything for granted.

"Just absolutely epic. That's the best word I can put out there for you. It's been incredible. This team has a lot of fight." -Bryce Harper on Nats' recent run of success

The Nats took a 2-0 lead into the eighth inning Wednesday night when Tyler Clippard, who allowed just two home runs in 54 IP between March 31st and August 17th, gave up his second home run in his last two appearances after he blew a save when he gave up a solo shot by D-Backs' right fielder David Peralta in the ninth inning on Monday night.

The home run the Nationals' set-up man surrendered Wednesday, on a letter-high 92 mph fastball inside to relatively light-hitting Arizona D-Backs' outfielder Ender Inciarte, was only made more head-shakingly surprising by the fact that the two-run blast came immediately after what was just the second walk Clippard has issued in his last 16 innings on the mound.

After they failed to score in the bottom of the eighth, and after Rafael Soriano earned something akin to redemption with a quick, 13-pitch, 1-2-3 top of the ninth, the Nationals rallied and walked off again with Bryce Harper and Kevin Frandsen singling to center off rookie right-hander Evan Marshall to put runners on the corners for pinch hitter Anthony Rendon, who stepped in and drilled a 1-0 pitch by third for another walk-off winner.

"Just absolutely epic," Bryce Harper said when asked how he would describe the Nationals' recent string of dramatic victories. "That's the best word I can put out there for you. It's been incredible. This team has a lot of fight. We have a lot of heart. And we never die."

"It's not the way you draw them up, but they don't stop figthing, that's for sure." -Matt Williams on another dramatic walk-off win

Fun as it is for fans, and as much as the players seem to never get tired of the on-field, Gatorade-filled celebrations, first-year skipper Matt Williams said he would prefer less "exciting" wins.

"It's not the way you draw them up," Williams told reporters, "but they don't stop figthing, that's for sure."

The Nationals' ability to keep collecting dramatic come-from-behind and walk-off wins, he explained,  is really just a matter of preparation.

"It's a question of just being prepared and being ready to step in there and do whatever has to be done," the former major leaguer-turned-manager said.

"Tonight it was Anthony. It's been a whole slew of guys. Drew [Storen] came in in a tough spot. [Soriano] pitched a good inning which allowed us to stay in the game and allowed us to get to that point and with one swing win it.

Soriano, with a bounce-back outing, impressed his manager, who expressed confidence in the reliever all week in spite of the recent run of rough appearances.

"He had a really good fastball tonight. 92-93 [mph]. Good slider. Everything was crisp. A couple of days off really helped him." - Williams on Soriano's scoreless top of the 9th

"He had a really good fastball tonight," Williams said, "92-93 [mph]. Good slider. Everything was crisp. A couple of days off really helped him."

Rendon, in just his second MLB season, was his usual unflappable self at the plate in spite of the fact that it was a tie game in the ninth and just his third pinch hit appearance in the majors.

"I think he was of an understanding of what they were trying to do after the first pitch," the Nats' manager explained.

"They wanted to go in with a sinker. [Marshall's] got a really good sinker. So I think he had an idea of what they were going to try to do until they got to two strikes anyway and he just got the head out on one."

As for Clippard? Was the second home run in two outings a sign of any larger problem?

"The ball the other night was a split," Williams said.

"Tonight it was a fastball. I think the split, it's not about missing location, cause it's an off-speed pitch anyway.

"Tonight I just think he missed location. He was a little up and not far enough in where he wanted it. There's no explaining it. They put a couple of good swings on the ball and they hit the ball over the fence. You can't explain that."

Williams has been saying for weeks now that Harper is coming around at the plate as the 21-year-old continues to work his way back from the torn ulnar collateral ligament in his left thumb, which sidelined him for 57 games earlier this season. Harper's ninth inning at bat, Williams said, was another good sign.

Hstarted up 3-0, took a close pitch he thought was ball four, but stayed focused and took a full-count pitch back up the middle for a leadoff single.

"Great at bat," Williams said. "[Marshall]  threw him a good sinker after that [3-0 pitch] and he just stayed focused."

"He hit the ball back through the middle tonight which is really important for him," Williams continued. "Aaron [Hill] made a great play on him, a diving play on him, a couple of them actually, but if he stays through the middle like that he's going to get a lot of base hits. I feel if he trusts himself to do that, the home runs will come. They will come. They'll come on hanging breaking balls and changeups left up in the zone. If he can stay middle of the diamond. And he's working hard on that, so I'm proud of his approach tonight." 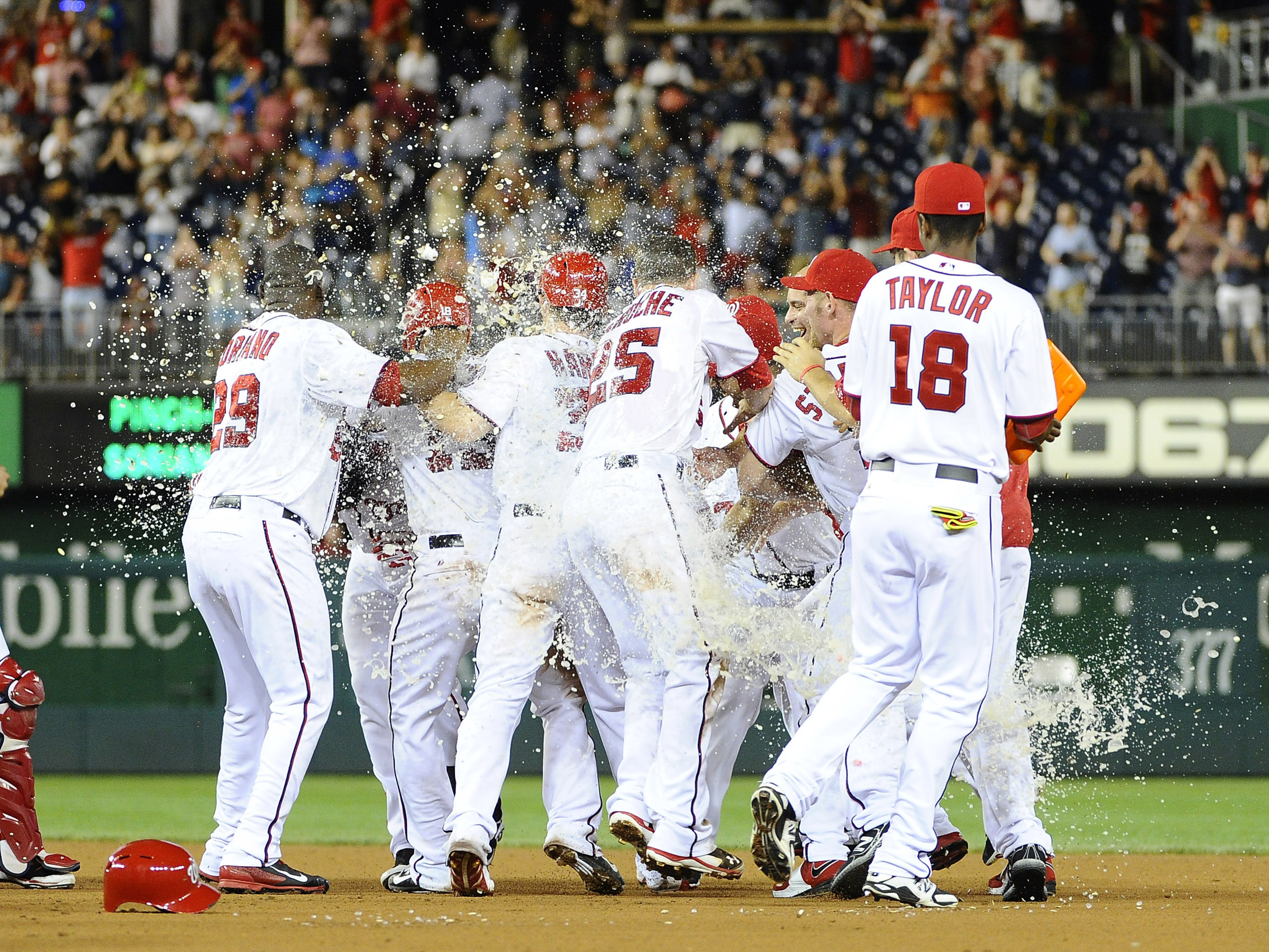 Williams was proud of the entire team. When the 7.0-game lead was brought up, however, he reiterated what he's been saying throughout the Nats' recent run.

"Just means that we have to keep working hard," Williams said. "It's important for us to be able to play well on an everyday basis and to have a chance to win games and we want to continue to do that."

Harper too put everything in perspective when asked what the seven-game lead over Atlanta meant to him and his teammates.

"We play the Braves seven more times," Harper said. "So if we were going in there right now and playing seven and we lost seven it would be tied. So you really just want to play ballgames, and hopefully that never happens of couse, but we've still got to keep playing, keep going. We've got about a month and a half left and we've just got to keep winning ballgames, keep playing and see where we're at."

There are only six games with the Braves left on the schedule, but you know what he means...