Washington Nationals' right-hander Jordan Zimmermann gave up seven hits, a walk and two earned runs in last night's 8-3 win over the Seattle Mariners. Zimmermann wasn't the big story, but he was solid again in the Nats' 76th win.

"We can read the stats like everybody else, but it's hard for them to face Jordan [Zimmermann] too, because he's pretty good." -Matt Williams on Zimmermann vs King Felix on Friday

The Washington Nationals knew just how good a pitcher Hernandez was, but as skipper Matt Williams told reporters before the game, they were running a pretty talented starter out there as well in the first game of the three-game set in Seattle.

"We can read the stats like everybody else, but it's hard for them to face Jordan [Zimmermann] too, because he's pretty good. So, that's kind of the same way on both sides. If we do things right we've got a chance to beat him, and if we don't then he's got a chance to beat us, it's a pretty simple game when it really comes down to it."

After a 33-pitch first in which he gave up two runs to put the Mariners ahead 2-1, it looked like it might be a long night for the Nats' starter, but Zimmermann settled down on the mound and in spite of some hard-hit balls and a high pitch count, managed to throw five scoreless innings after that before he was lifted after six with the Nationals ahead, 5-2.

Seattle's hitters attacked Zimmermann early while he struggled with his command and collected five of the seven hits he allowed over the first three innings, but he finished the night with a few quick frames including a nine-pitch, 1-2-3 sixth that left him at 105 pitches overall. 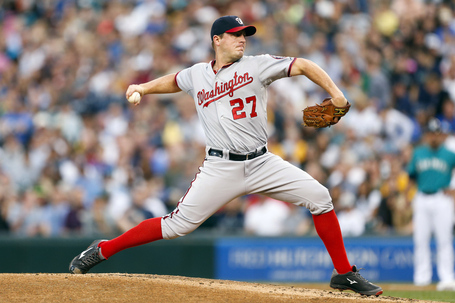 "I just think they were aggressive and he was throwing the ball in the strike zone with his fastball and then found his breaking ball in the third or fourth inning," Williams said afterwards. "So, that allowed him to get comfortable out there and make pitches."

"In the first couple of innings we hit some balls hard. He kept pouring it in the strike zone. That's what he does. That's typical of his outings." -Mariners' Trent Jewett on Zimmermann vs Seattle

Mariners' bench coach Trent Jewett, who was a coach with the Nats from 2011-13, and was filling in for skipper Lloyd McLendon as manager last night while McLendon attended his daughter's wedding, was asked after the loss what Zimmermann did differently after the first few innings to turn things around.

"I don't know that he made a whole lot of adjustments," Jewett said. "In the first couple of innings we hit some balls hard. He kept pouring it in the strike zone. That's what he does. That's typical of his outings.

"He's going to keep coming after you and he did it again tonight. I thought we hit the ball well, as a unit, we had a chance to capitalize and put some big numbers up."

The Mariners had a chance to really hurt Zimmermann in the first, when Kyle Seager stepped in with two on and one out and just missed a three-run blast, crushing a full-count fastball that ended up to the right of the right field pole.

Seager singled to drive in the second run Zimmermann surrendered in the first, giving Seattle a 2-1 lead instead a 4-1 advantage.

"Seager's ball goes foul and might have taken the wind out of our sails a little bit," Jewett mused.

"We ended up getting one run, grabbed the lead, and generally with what we had out there to combat that, that's going to keep us in the game, tonight it wasn't meant to be, didn't happen."

The Nationals bounced back with home runs by Jayson Werth and Ian Desmond in the third, after Anthony Rendon's solo blast in the first started the scoring, then added a fourth home run off Hernandez when Wilson Ramos took the right-hander deep in the top of the fourth.

• We talked about the Nationals' power display, Zimmermann's outing and more on last night's late-night edition of Nats Nightly: