Washington Nationals' outfielder Bryce Harper teamed up with Gatorade to surprise student-athletes at Anacostia High School in D.C. with a locker room makeover that was designed to provide the school's athletes with a pro-caliber locker room. Harper visited the school today.

Anacostia High School is located about seven minutes away from Nationals Park, across the Anacostia River on 16th Street Southeast. The student-athletes there received a surprise visit today from 21-year-old Washington Nationals' outfielder Bryce Harper, who was there to help Gatorade unveil a makeover that redesigned the locker room and provided the team with a pro-caliber locker room with updated floors, walls painted with team logos and colors, a new leather couch (which Harper said was the best part), new coaching materials, white board, tv and Gatorade coolers, towels and bottles. Harper tweeted the following picture after he went to the school this afternoon:

After the unveiling, Harper took a few minutes to talk to Federal Baseball about the reaction to the makeover, the questions he was asked and how important it was for him to do what he could to help out locally and provide, with Gatorade's assistance,` for student-athletes in the nation's capital.

Harper laughed when asked if the athletes were more excited about the completely new locker room or the chance to meet him and admitted that the makeover had the high schoolers way more excited than the opportunity to talk to the Nationals' starting left fielder.

"They were definitely going crazy and really excited about what was going on. To be able to help athletes out at this young age is a lot of fun for me and it was great to see the smiles on their faces..." -Bryce Harper on surprising Anacostia HS athletes with a new locker room

"Being able to come in and be partners with Gatorade and see them make over a whole locker room was something I think these kids really needed and they definitely enjoyed. They were definitely going crazy and really excited about what was going on. To be able to help athletes out at this young age is a lot of fun for me and it was great to see the smiles on their faces and to be able to just have that motivation of coming into the locker room every single day into a nice environment and get ready for a game, be able to hang out after games is something that I think they'll enjoy a lot."

As noted above, when asked what part of the makeover he would have enjoyed most if he were still in high school, Harper said the new couch was the best part.

• Note: Before and after images of the newly renovated Anacostia High School locker room courtesy of two-time MLB All-Star Bryce Harper and Gatorade, Monday, August 4, 2014, in Washington, DC. The locker room was made-over to provide these athletes a pro-caliber place to recover for their next practice or game.

"Probably the couch in the corner," Harper said. "Just lay down and take a deep breath and try to get away from everything that was around me. It's something that is really cool for them and definitely just hanging out with all the guys and have some fun and have a place of peace and a good environment is something that I think they will enjoy."

Harper has done plenty of promotions with Gatorade before, of course, including this past April's debut of his first Gatorade commercial:

The makeover was part of another campaign around the commercial release of Gatorade's Recover Whey Protein Bars, and no this is not a paid advertisement.

The reason we were interested in talking to Harper about this project is that his relationship with Gatorade was allowing him to help D.C.-area residents, and athletes in particular in this case, which is something he said was important to him.

"I just told them they needed to just enjoy it and have fun and keep working as hard as they can and come into every single day like it's the last day they'll ever play the game..." -Bryce Harper on his advice for the Anacostia HS student-athletes

"The partnership with Gatorade was something that I was looking forward to this year," Harper explained.

"They're such a family-based company that really looks after their athletes. And I always love giving back. l love being around kids and being able to do things like this is very special and I have a lot of fun doing it. Any time I can do something like this I take full advantage of it. And to just be able to come in here and hang out with the kids for a little bit and talk to them and try to give them some motivation, and try to let them build on their game in every single way, if that's recover, if that's on the field, or off the field, you always need something to get that in you and I was happy to do this for them."

Harper said the students were kind of awed by the makeover and the coaches were asking more questions than the kids, but he did offer advice to the few athletes that did talk to him. 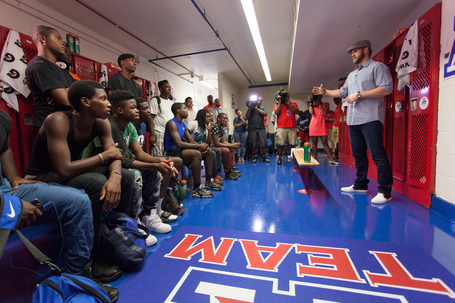 • Note: Two-time MLB All-Star Bryce Harper addresses Anacostia High School athletes after surprising them with a newly renovated locker room courtesy of he and Gatorade, Monday, August 4, 2014, in Washington, DC. The locker room was made-over to provide these athletes a pro-caliber place to recover for their next practice or game.

Part of the idea of the locker room makeover was to provide the student-athletes with a pro-caliber locker room and at least a little bit of the atmosphere major league players experience on a daily basis.

As a third-year major-leaguer not too removed from his own high school days, Harper, who was drafted no.1 overall in 2010 after graduating early and attending just one year of junior college, said he's taken advantage of the facilities and staff that are there with the Nationals to help him continue the work that started when he was a kid working with his father.

"I had my pops push me every single to day to work out and have that mentality of working out every single day trying to better myself and further myself to make it to the level I'm at right now..." - Bryce Harper on continuing the work he and his father started

"I had my pops push me every single day to work out and have that mentality of working out every single day trying to better myself and further myself to make it to the level I'm at right now," Harper said. "You can always get better. You can always do things every single day to get you to a different level and to have all the things around me that help me out, having the weight room and the locker room and having the strength coaches that I have and the trainers that I have has helped me get through seasons and get through injuries and I owe a lot to them."

Harper has dealt with injuries, of course, with bursitis in his knee costing him significant time last season and the tear of the ulnar collateral ligament in his wrist sidelining him this time around, so he knows how important it is to not only prepare for each game, but work to recover since there's always another game coming and not too many days off during the course of a major league campaign. 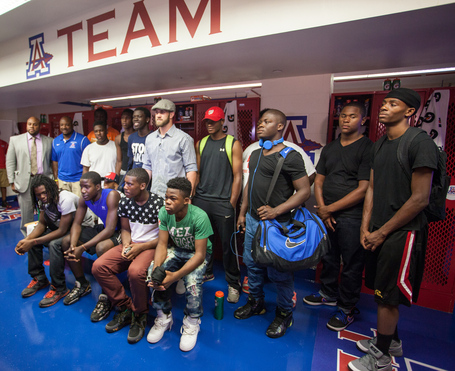 • Note: Anacostia High School athletes show appreciation for their newly renovated locker room courtesy of Gatorade and two-time MLB All-star, Bryce Harper, Monday, August 4, 2014, in Washington, DC. The locker room was made-over to provide these athletes a pro-caliber place to recover for their next practice or game.

"You're playing 162 games a year," Harper said. "You have to recover after every single game. Try to get your rest. Try to get protein into you, the Energy Chews into you before the game and the electrolytes into you during the game and you really have to just try to take full advantage of that and really try to recover after every single game to get ready for that next game."

Harper also went on MLB Network Radio after the unveiling of Anacostia High School's new locker room and talked about the makeover and what the Nationals did at the trade deadline to make over their roster and what they are trying to do going forward to maintain their lead in the NL East and hopefully return to the postseason.

AUDIO: #Nats Bryce Harper on #PowerAlley: "The biggest thing is that we’re winning, it's all I care about" - https://t.co/fXt94KGPur

"I wasn't sure what we were going to do. I heard rumors of getting a guy in the bullpen or trying to get somebody that could replace [Ryan Zimmerman] for a minute since he got hurt. But I knew our team was great where we were and we just added another great player. Asdrubal Cabrera has defined himself as one of the best middle infielders in the game. He's been unbelievable for us the past couple nights and it's exciting to add to our team with a great player like that who's a big leaguer. He's been in the big leagues and he's done things. We didn't need a prospect, we needed a big leaguer at that time and that's what we got."