Matt Williams was asked a simple question Wednesday morning about struggling Washington Nationals' outfielder Bryce Harper. He gave an honest answer. Then things got weird. Later on in the day he clarified his comments and cautioned against reading his mind.

"We've all been there. We've all been in that position where it looks like someone is throwing an aspirin up there. But it can turn quickly too..." -Matt Williams on Bryce Harper's struggles at the plate on Tuesday night

Williams talked openly after Tuesday night's game about Harper's struggles, but also the hard work the left-handed hitting outfielder was doing to try to get back to being himself at the plate.

"We've all been there," the former major league infielder-turned-manager told reporters. "We've all been in that position where it looks like someone is throwing an aspirin up there. But it can turn quickly too and some days it just looks like a beach ball as well. So, I'm fine with him. He's working hard. He works hard every day. He's one of the first guys here to work and he's working through it. I'm good with it. He's grinding up there." 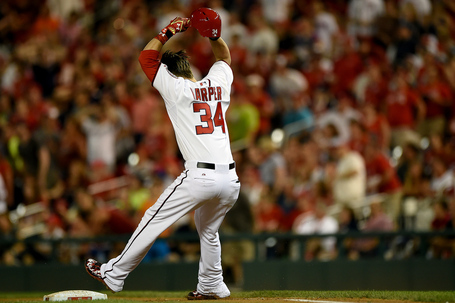 When Williams made his weekly appearance on 106.7 the FAN in D.C.'s The Sports Junkies on Wednesday morning he was asked about Harper's struggles again.

One of the "Junkies" asked about the possibility of sending Harper down to the minors to figure things out.

"Is it a terrible... just a wacky idea, to send him down to Syracuse for a week just to get right?" the host asked. "Is that just a stupid idea on my part?"

"I don't know. I don't think it's stupid. Generally if you have young players, that's what you do. But this guy is a special young player, we all know that. It's different." -Matt Williams on possibly sending Harper to minors on 106.7 the FAN in D.C.

"I don't know. I don't think it's stupid," Williams responded. "Generally if you have young players, that's what you do. But this guy is a special young player, we all know that. It's different. So, I think he works hard every day. He's the first one at the ballpark, generally, to get his day going. He's grinding. We're doing everything we can to help him get a good feel going in there and help him with his confidence and all that. It's not easy by any stretch. I don't know if it's a good idea to do that [send him to Syracuse] because it's completely different pitching. We all know the big difference between Triple-A pitching and big league pitching.

"So it's probably more of an option to have him feel good here, get it back. We've seen him, certainly, good and hitting well. And, for me, it's not necessarily that he can't hit, of course, it's that he's in some kind of a slump.

"So, what we have to do is try to work our way through it and get him out of it as quickly as possible. But he grinds every day, you guys, he's doing everything to get out of it and so are we."

Williams went on to suggest that you can't overlook the fact that Harper suffered a significant injury to his left thumb.

"I would not discount the fact that he had an injury to his top hand. So, it's different. If you don't feel strong, or if you feel something is wrong with your hand then it can affect you. So, him coming back from the injury is not easy.

"So, we have a little bit of patience. Put in some good hard work, and hopefully he gets hot here and can carry us a little bit too." 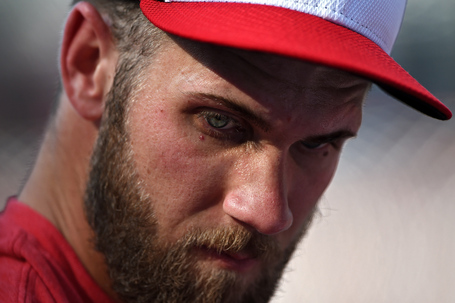 "It looks like he's really violent right now," Williams said when asked to break down Harper's swing, "like he feels like he has to do a little bit extra within the swing to get the bat head through or to hit the baseball when it's pitched to him. And we all know that when you're feeling it, and when you're swinging well that's really calm. That's really relaxed and it's quick as opposed to strong. So we're working to correct that and so is he and he'll be fine, you guys. We just have to... for me anyway, be patient with him, keep working, keep putting in the work every day and be supportive and let him know that we're behind him, we're there to help him if he needs it."

• You can listen to the entire interview with 106.7 the FAN in D.C.'s The Sports Junkies HERE.

While you'd have to go out of your way to read into the comments above that there was a possibility of Harper being sent down to work things out, apparently enough people wondered about what was said that Williams was asked directly in the press conference before Wednesday night's game if, as Washington Post writer Adam Kilgore reported, the idea of sending Harper down was "even in the realm of possibility"?

"Boy, you guys have been listening to the radio shows," Williams began his response.

"Did you listen to it live?" he asked a reporter.

Then he responded to the original question, addressing the media members as a group.

Nationals 7-1 over Mets: Doug Fister does it again

"I will caution everybody in this room," Williams said, "the minute you think you can read my freaking mind, you're sorely mistaken. Okay? It pisses me off to even think about the fact that somebody would take a comment that I make on the radio and infer that I am thinking one way or the other. I've had it. Don't do it anymore. Bryce Harper is one of the guys on our team, he's a very important part of our team, just like everybody else is.

"Do we understand each other?

"It's not fair to the kid, it's not fair to the rest of the guys in that clubhouse to even think about sending Bryce Harper to the minor leagues or to cause a stir. It's unacceptable. It won't happen. Is that good enough for you? Okay? Next?"

Harper went 1 for 3 with a walk and a run scored in the Nationals' 7-1 win over the Mets on Wednesday night.