The Atlanta Braves hit four home runs off Stephen Strasburg in last night's series opener and scored seven runs on the Washington Nationals' '09 no.1 overall pick in five innings in what ended up a 7-6 win for the NL East's second-place team.

Share All sharing options for: Nationals' starter Stephen Strasburg on struggles vs the Braves: "Just not executing pitches. That's the bottom line."

"Well, he got ahead of Justin [Upton] with a curveball and then tried to go down and away with a fastball and left it middle of the plate," Matt Williams told reporters after the Washington Nationals' 7-6 loss to the Braves Friday night in Atlanta, Georgia's Turner Field.

"Certainly they're not where he wants them to be, those pitches, but it's not easy to hit a ball out of the ballpark either." -Matt Willams on the home runs the Braves hit off Stephen Strasburg

"And then B.J. [Upton] hit a curveball that was not where he wanted it to be," Williams continued. "And then Freddie [Freeman], on his homer, the ball was just up in the strike zone. So, we were down early, but fought back hard. The guys really fought tonight, so not really enough at the end."

Justin Upton, on an 0-1 fastball over the plate and B.J. Upton on a 1-1 curve up inside, took 26-year-old Nationals' starter Stephen Strasburg deep in the first and second innings, respectively, with each home run a two-run blast.

The Uptons homered in the same game for the fifth time since they both joined the Braves in 2013, moving ahead of the Giambi brothers, Jeremy and Jason and Vladimir and Wilton Guerrero for the most games in which two brothers have homered in major league history.

Strasburg walked Freddie Freeman in front of the younger Upton brother with two down in the Braves' first.

Ervin Santana was on first after bunting into a force at second when the elder Upton went deep with two down in the home-half of the second.

"Just not executing pitches. That's the bottom line. Feels good out of the hand, just not hitting the spots well enough." -Stephen Strasburg on struggles vs the Braves on Friday

Atlanta's second baseman Tommy La Stella, who took Strasburg deep in the fifth for the fourth home run the Nationals' right-hander allowed in five innings, singled with two down in the second, before Freeman crushed a belt-high mid-90's fastball, sending a line drive to right that cleared the outfield wall as Nats' right fielder Steven Souza, Jr. ran full-speed into the partially padded out-of-town scoreboard trying unsuccesfully to make the catch.

"I just didn't execute pitches the way I needed to," Strasburg told reporters after his eighth loss in 12 road starts this season and another rough night in the Braves' home in which he gave up seven hits, two walks and seven runs on four home runs while also managing to strike out nine.

"You can't put a finger on anything other than they put a good swing on it," Williams said. "Like I said, he got ahead of Justin and he got ahead of B.J. and they put good swings on the baseball. Certainly they're not where he wants them to be, those pitches, but it's not easy to hit a ball out of the ballpark either. So, just keep fighting them."

"Just not executing pitches. That's the bottom line. Feels good out of the hand, just not hitting the spots well enough."

He was asked if it was something with his mechanics that he could work on or fix? 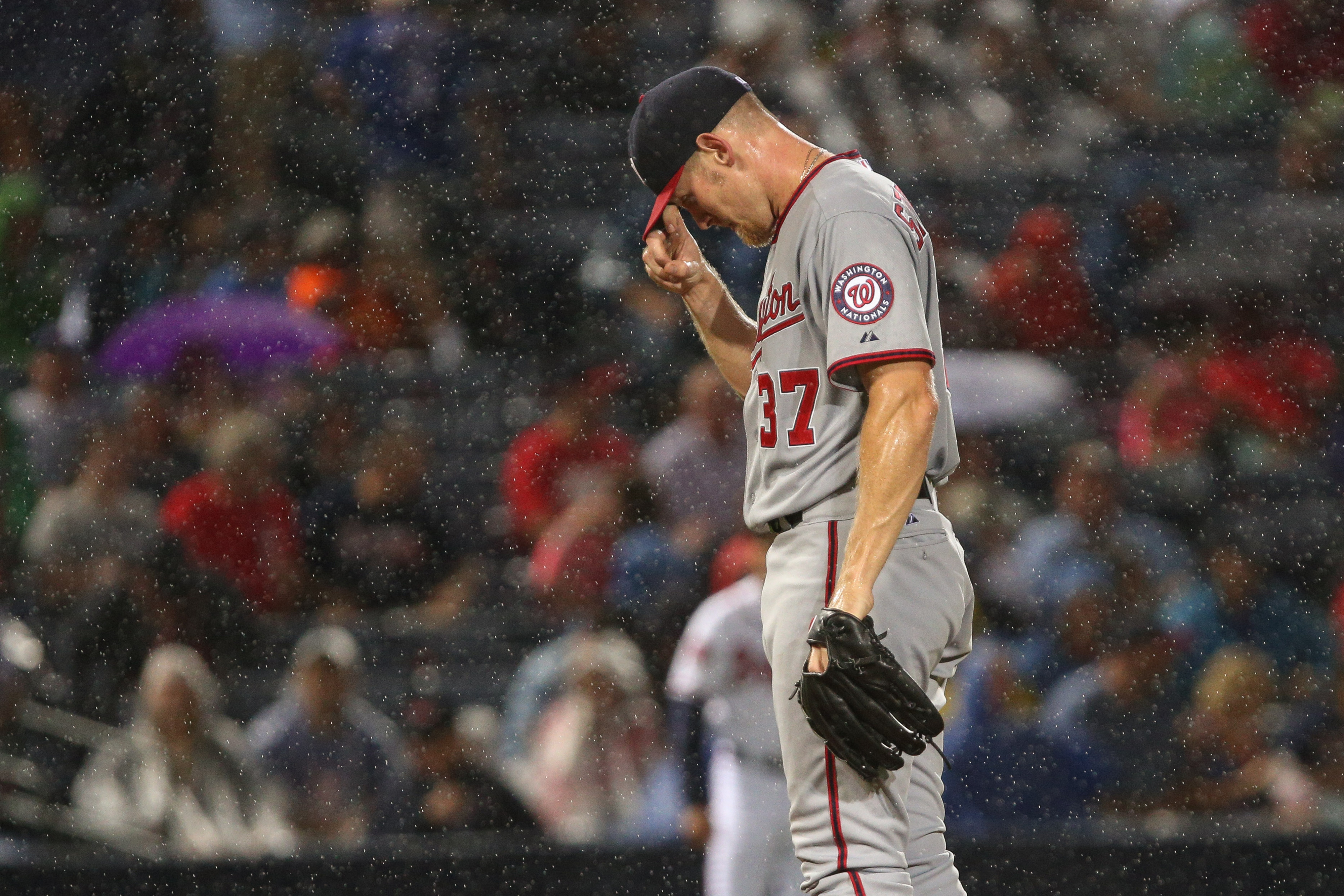 "I don't really know how to work on it," he admitted. "I mean, some days I'm hitting the spot and some days I'm a couple inches up. So, just got to roll with it, try to miss down instead of miss up."

Strasburg was left with a 6.99 ERA in 28 ⅓ innings pitched in Turner Field in his career and a 5.25 ERA in 70 ⅓ IP away from Nationals Park this season.

A reporter wondered if he had a problem with the mound in Turner Field, or if something about it was different.

Strasburg shook his head, "No."

"Just another mound, I don't know. You know, they put good swings on mistake pitches."