The Washington Nationals pounded out 15 hits and scored 10 runs to run away with the next-to-last game in Citi Field this season and beat the New York Mets 10-3 on Saturday night. Matt Williams talked afterwards about running up Zack Wheeler's pitch count.

New York Mets' right-hander Zack Wheeler was (7-1) in his last 12 starts going back to the start of July before taking the mound tonight against the Washington Nationals, with a 2.28 ERA and a .216/.304/.353 line over that stretch.

When he was done for the evening, after just four innings in which he gave up seven hits, two walks and six earned runs, the 24-year-old, second-year major leaguer had thrown at total of 100 pitches to the 21 batters he faced, who ran up his pitch count and knocked him around, jumping out to a 6-0 lead in what ended up a 10-3 Nationals' win in Citi Field.

"Our objective it to put together good at bats, long at bats and grind through the first few innings and score when we can, but grind through those at bats..." -Matt Williams on running starter's pitch counts up

After a relatively quick, 17-pitch top of the first in which he worked around the first of four hits Nationals' third baseman Anthony Rendon collected on the night, the Mets' starter threw 30 pitches in the second, giving up a two-run home run by 21-year-old Nationals' slugger Bryce Harper after a leadoff walk to Ian Desmond, 20 pitches in the third to push him up to 67 overall and another 20 in the fourth as the Nats added a third run on an errant throw by catcher Travis d'Arnaud, who air-mailed an attempt to catch Desmond stealing third.

Wheeler was thirteen pitches into the fifth, when an RBI single by Jayson Werth which drove Denard Span in from second and made it 4-0 and ended the starter's night. Both of the runners he left on scored on a two-run single by Ian Desmond that made it 6-0 Nats.

The Nationals added four more runs before it was over with Jayson Werth grounding into a force in the sixth that brought Span in from third, Desmond driving Werth in with his third hit of the night in the eighth and Span hitting a two-run home run in the top of the ninth to cap off the 10-3 win.

Nats' skipper Matt Williams was asked after the game about the damage the Nationals' "long" lineup can do on night's like tonight when they combined for 15 hits with Rendon (4), Desmond (3), Harper (3) and catcher Jose Lobaton (2) all putting together multi-hit efforts.

"We got some opportunities, we took advantage of it and got his pitch count up. He's a good pitcher, he's had a lot of success lately..." -Matt Williams on running Zack Wheeler's pitch count up in NY

"I think everybody wants a deep, long lineup," Williams said.

Williams was asked what that tells him about the Nats' balanced attack?

"It tells me that we've got pretty good on-base guys and guys are out there," Williams said. "We've got some guys with some homers. You know, not 40 and not 120 RBIs but we've got guys that have been consistent all year and that's good. If we can get a deep lineup like that then we feel good about our offense going into any game, so that just speaks to consistency and it speaks to guys being on base for them."

Nationals 10-3 over Mets in Citi Field 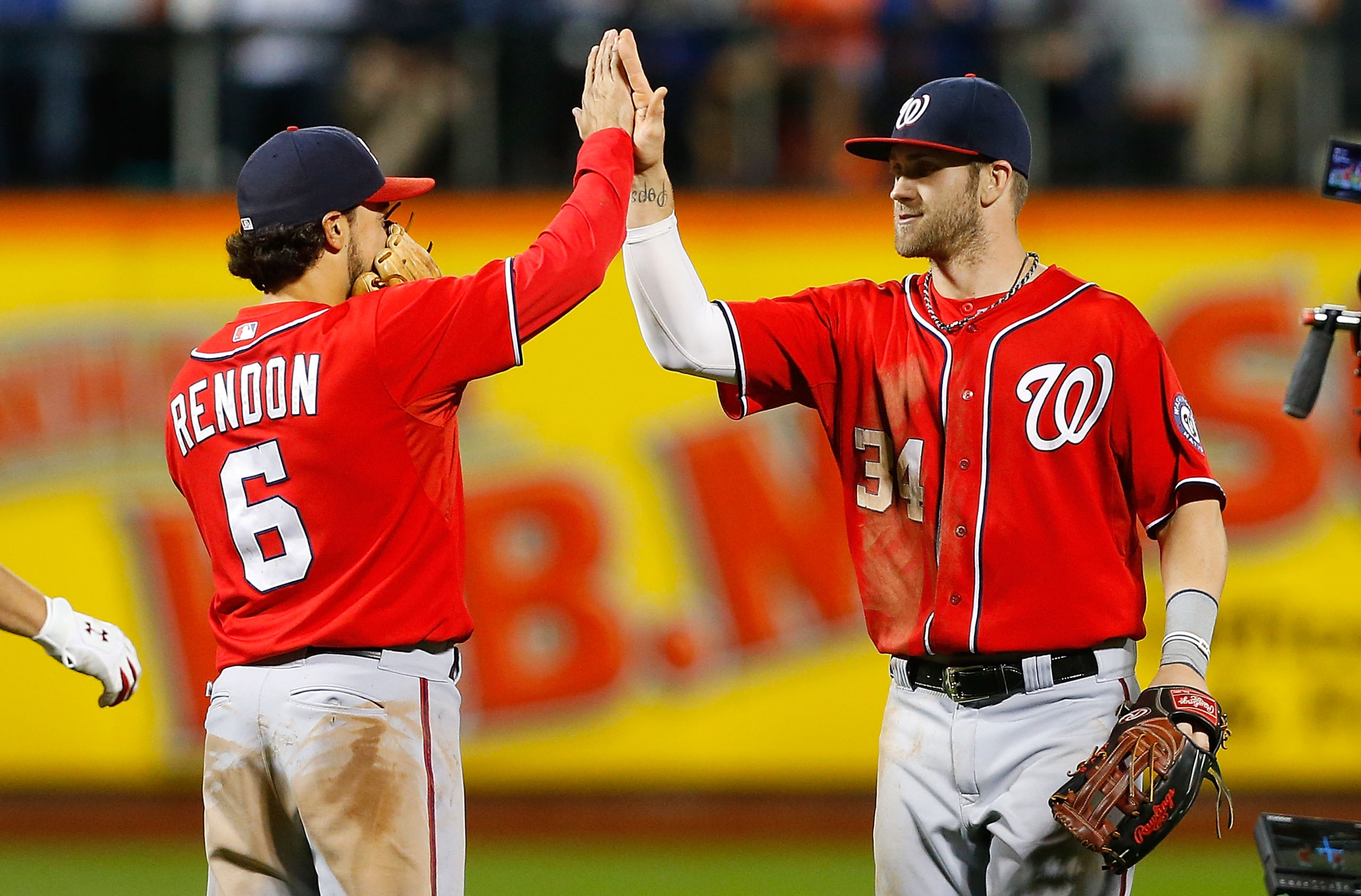 The Nationals entered play on Saturday fifth in the NL with a .320 OBP as a team, as one of only two teams, along with the Pirates, with four players in the Top 30 among qualified players in the National League in OBP.

Their win over the Mets was the the Nats' 12th in fifteen games against their NL East rivals from New York and their eighth in nine games in Citi Field this season with one more to play Sunday afternoon.