A quick look at Nationals' closer Drew Storen's use of the sinker at two pivotal career points.

October 12, 2012: A Friday night. Remember that? Elation for eight innings of baseball -- serenading Michael Morse, jumping in disbelief as the Nats jumped out to an early lead, Jayson Werth's double, Bryce Harper's triple, and Ryan Zimmerman's homer -- and then first-round, homegrown draft pick Drew Storen enters to lock down the N.L. Division Series against the Saint Louis Cardinals in the ninth.

The Cardinals rallied, of course. A double, two walks, and a glancer off Ian Desmond's glove from Daniel Descalso tied the game. Deflation, for certain, but still a tie game, and two outs as well.

And then Pete Kozma steps up.

Kozma, a career .236/.296/.318 hitter who hardly sniffed the majors in 2014, drove an elevated Storen sinker to right field and, in plating two runs, a dagger through Nats' fans' hearts. You can tell from Suzuki's glove that Storen missed his spot; a slap hitter like Kozma did, to his credit, what he was good at doing. Brooks Baseball had the pitch up and out over the zone, right where you or I might stand a chance throwing the bat out there: 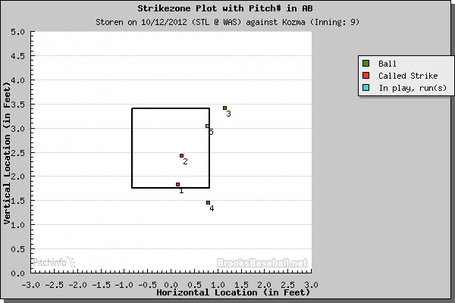 Never has "in play, run(s)" been more devastating. Maybe a sinker wasn't Storen's best choice; in 2012, batters hit .327 with a .354 BABIP on the pitch. Maybe Kurt Suzuki could have framed the earlier 0-2 pitch on Kozma better; he was pretty terrible that year by framing metrics (something Rizzo addressed this offseason, but that's another article).  Woulda, coulda.

Storen's immediate tale after Kozma is well known, as he had some troubles in 2013. We love #narratives around here (rolls eyes), and the narrative was that the Stanford product couldn't put Game 5 behind him, fair or not.

And several things this time were different. For example, Storen was facing Justin Upton, who is not Pete Kozma. Most critically, the 27-year-old hurler -- who has emerged as Washington's 9th inning man in the wake of Rafael Soriano's issues -- earned an out, and in doing so, secured the division title:

With the angle and his follow-through, it's a little hard to tell the difference between Storen's end to 2012 and his end to 2014.  Brooks Baseball is again there to help: 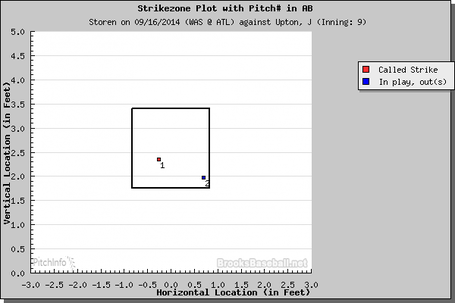 Never has "in play, out(s)" been more awesome. With his last pitch in Atlanta as the closer for a team that hadn't yet attained a division title, Storen's sinker was about a foot lower. His confidence? Probably a mile higher.

Part of that might be due to his sinker. This year, opposing hitters are batting just .227 against the offering, and not getting much power behind their hits (9 singles, 1 double) when they do make contact. There's no doubt his sinker is "sinking" more, if you're looking for something, inconclusive or not: 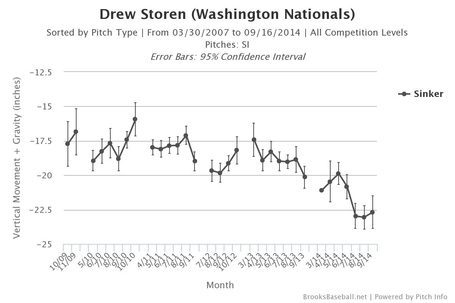 Maybe his new delivery is affecting things (the numbers suggest he's ever so slightly changed his release point) but that's for another article, too. I'm putting the spreadsheet and statistics down and backing away slowly with hands in the air.

It's been enjoyable (at times) for fans to watch Storen's arc from impressive arm to a pitcher who struggled for much of last year, and ultimately now as someone entrusted with what most baseball lifers call the toughest three outs of the game. Maybe they aren't the toughest, but the 9th inning undoubtedly has gravity.

For me, Storen's resolve and commitment to improving over the offseason and during the 2014 campaign has been refreshing in a sports world afflicted with negatively and over-the-top star worship. It's one part of the 2014 team that is full of great stories, stories we'll be able to share for a long time.

In the end, through the window of two pitches -- both sinkers -- with vastly different results, we can see Storen's improvement manifested. And with his current form and performance overall, we can see a division title and future success in October.