Matt Williams on Nationals' closer Rafael Soriano: "We're going to give him the ball. He's our closer."

Washington Nationals' closer Rafael Soriano made it a little more "interesting" than fans would probably like, but the 34-year-old reliever locked down his 31st save of the season and the Nationals' 78th win last night in L.A.

Share All sharing options for: Matt Williams on Nationals' closer Rafael Soriano: "We're going to give him the ball. He's our closer."

Jayson Werth connected for the first of four home runs the Washington Nationals hit off Los Angeles Dodgers' right-hander Roberto Hernandez last night with two down in the top of the first, putting the Nats up 1-0 early in the series opener in L.A.

Gio Gonzalez issued a two-out walk to Dodgers' first baseman Adrian Gonzalez in the bottom of the inning, however, and Matt Kemp followed with a two-run home run to right that put the home team ahead 2-1 after an inning of play in Chavez Ravine.

Gonzalez retired 16 of the next 17 batters he faced, with a two-out walk to A.J. Ellis giving the Dodgers' their only baserunner between the first and seventh innings as the Nationals jumped out to a 6-2 lead with home runs by Asdrubal Cabrera and Denard Span, who took Hernandez deep twice and knocked him out in the fifth.

A 13-pitch sixth left the Nationals' left-handed starter at just 67 pitches, but seven pitches and two singles into the seventh, Gonzalez was lifted in favor of reliever Drew Storen, who retired Yasiel Puig but gave up an RBI single to center by Juan Uribe that got the Dodgers within three runs at 6-3.

Gonzalez was charged with the third run since Matt Kemp, who scored on Uribe's hit, reached base while the left-hander was still on the mound.

In six innings of work, the Nats' 28-year-old southpaw surrendered three hits, two walks and the three earned runs. He also induced 12 ground ball outs from Dodgers hitters, putting together one of his stronger starts of the second-half.

"Gio was good," Nats' skipper Matt Williams said after the Nationals wrapped up a 6-4 win and gave Gonzalez his first win since July 5th.

• Legendary Dodgers announcer Vin Scully recreated the conversations Gio Gonzalez has with himself on the mound during one of Gio's at bats last night:

After Uribe's RBI single, Storen recorded the second out of the seventh, but Dodgers' manager Don Mattingly went to his bench for pinch hitter Andre Ethier, so Williams countered with lefty Matt Thornton.

Mattingly burned Ethier and brought Justin Turner up for a more favorable matchup, but Thornton threw a 1-2 fastball by the right-handed pinch hitter and stranded both of the runners he inherited.

Williams was asked afterwards about the expanded rosters allowing both teams to go for the best matchup they can get. He said it's something he will, of course, take advantage of when he can.

"We're going to give him the ball. He's our closer. He's been our closer all year. He'll continue to be." -Matt Williams on Nats' closer Rafael Soriano

"On occasion," Williams said. "Depends on the situation. But, yeah. I mean, we've got the ability to go get the lefty if we need to. Matt [Thornton] came in and of course they're going to switch around and hit [Justin] Turner there, but [Thornton has] got a really good fastball and he was able to get him."

Tyler Clippard set the Dodgers down in a 16-pitch, 1-2-3 eighth and Nationals' closer Rafael Soriano came out for the ninth looking for his 31st save of the season, dispatching Matt Kemp and Scott Van Slyke in quick succession before issuing a two-out walk to Yasiel Puig. That's when things once again got "interesting" for the 34-year-old reliever.

Puig took second base on defensive indifference and scored on another RBI single to center by Uribe.

The Dodgers' third baseman went first-to-third on a two-out single to center by Carl Crawford, but Soriano then struck debuting outfielder Joc Pederson out to end the game with a belt-high 3-2 slider outside that was called strike three by home plate ump Mark Ripperger.

Though the Dodgers threatened and brought the winning run to the plate, Williams told reporters that the final result was what was important.

"It's the last out and we got it and that's what matters," he said. 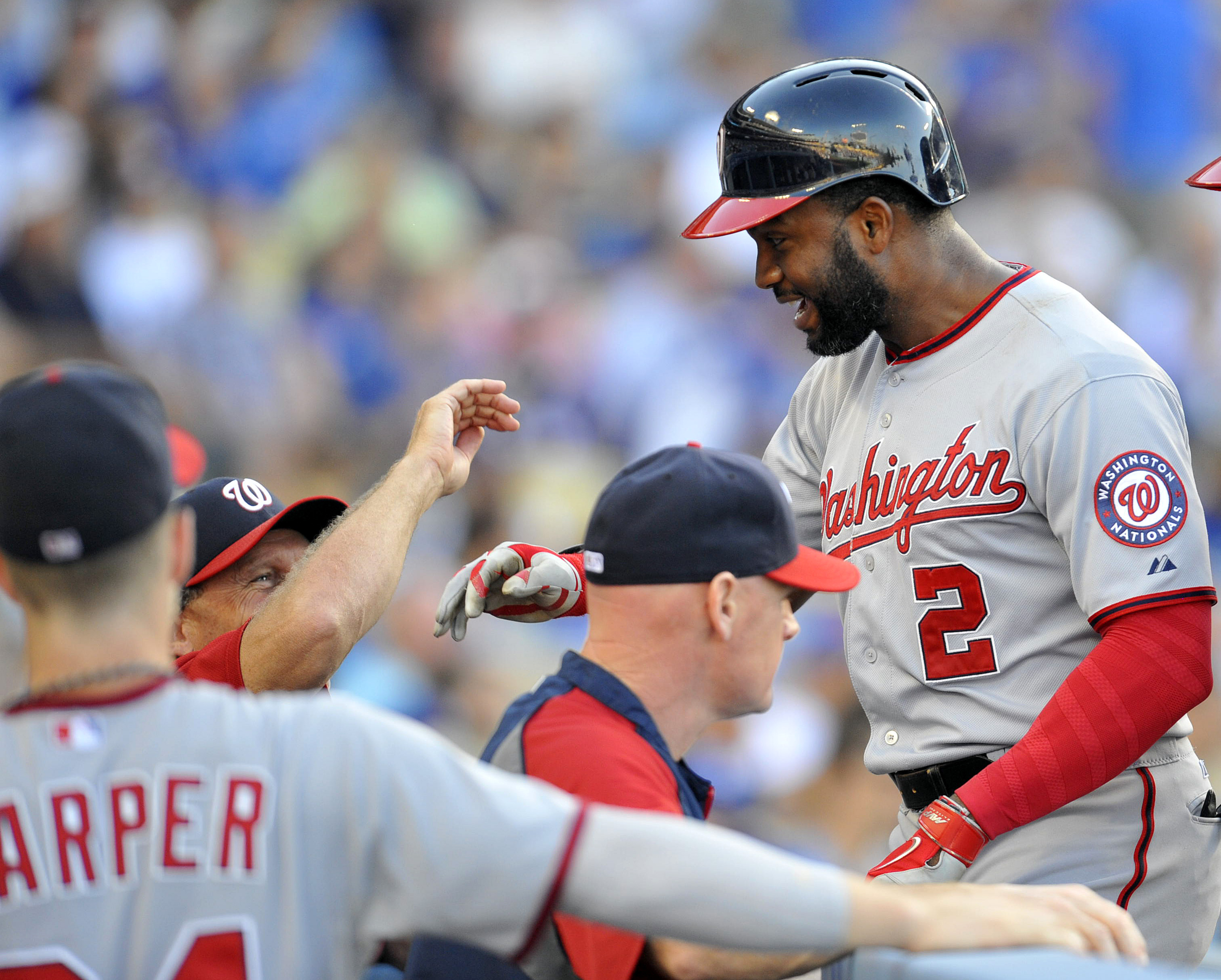 "But they put some good at bats together in the ninth. [Soriano] got two quick outs and then they hit a couple of balls back through the middle. The walk got him, but he got the last one, that's all that matters."

Soriano gave up a least one hit for the seventh time in his last 14 appearances, and a run for the fifth time over that stretch, but got the strikeout he needed to strand two Dodgers and lock down the Nationals' 78th win.

The next time there is a save opportunity, he'll get the ball again.

"We're going to give him the ball," Williams said. "He's our closer. He's been our closer all year. He'll continue to be. There are situations where we're going to use other guys, but it depends on his pitch count and his workload too."