On Nationals' starter Stephen Strasburg and Game 1 of the NLDS

Washington Nationals' right-hander Stephen Strasburg started on Opening Day. He took the ball in the first game of the second-half. Will he get the start in Game 1 of the NLDS next Friday? He's earned it.

Share All sharing options for: On Nationals' starter Stephen Strasburg and Game 1 of the NLDS

When the Washington Nationals realigned their rotation going into the back-to-back doubleheaders with the New York Mets and Miami Marlins and the last two games of the regular season on Saturday and Sunday, it worked out so that Stephen Strasburg would go in the next-to-last game of the year and Jordan Zimmermann would pitch in the 162nd game of the season.

Matt Williams explained to reporters that the decision gave Zimmermann a little extra rest after he suffered a bruised shoulder on a liner back to the mound during his last outing. Moving him back a few days also left fewer days off in the leadup to his first postseason start.

"I think the command of his fastball has been really good. His secondary pitches have been good. But for me the most important thing is he looks strong." -Matt Williams on Stephen Strasburg's strong finish to the regular season

Strasburg and Zimmermann are lined up to be ready to go on five days rest in the first two games of the NLDS, which are scheduled for next Friday and Saturday, October 3rd and 4th in Nationals Park.

No announcement will be made until after Sunday's regular season finale according to Williams, but everyone did the quick math when this weekend's starters were announced.

In an MLB Network Radio interview this week, Williams talked about the way Strasburg's pitched in September after he shut the Miami Marlins out over seven innings this past Sunday.

"He's strong," Williams said. "That goes back to April. That goes back to Spring Training and starting the season and continuing to work at his craft and doing the things he needs to do. His diligence in between starts.

"He works really hard. The September numbers are really good. I think the command of his fastball has been really good. His secondary pitches have been good. But for me the most important thing is he looks strong."

Strasburg's currently twenty-six innings over his previous season high for total innings pitched at 209 IP, surpassing the 200-inning mark, a goal he set for himself back before the 2013 campaign.

"He was shut down early in his career coming off of surgery and he's to the point now where he feels good about where he's at and continuing to roll those numbers through," Williams said.

"He's commanded the fastball extremely well to both sides of the plate, and I think that just sets up the rest of his arsenal once he establishes the fastball." -Mike Rizzo on Stephen Strasburg on 106.7 the FAN in D.C.

Nationals' GM Mike Rizzo certainly sounded like he was happy with where Strasburg's at heading into the postseason when he spoke to 106.7 the FAN in D.C.'s Grant Paulsen and Danny Rouhier about the right-hander this week.

Rizzo too agreed that it was all about Strasburg's command of his fastball.

"He's commanded the fastball extremely well to both sides of the plate," Rizzo said. "And I think that just sets up the rest of his arsenal once he establishes the fastball. Because it's a lively, big velocity commanded fastball, it really sets up his other two offspeed pitches and I think that what really has been the one tell-tale sign of how effective he's been, is he gets ahead of hitters with the good fastball then can get them out with something else."

Rizzo wasn't willing to commit to Strasburg as the starter for the first game of the NLDS either, however, though he did talk about what will go into the decision.

"We're going to put out the guy that gives us the best chance of winning that game that particular day," Rizzo said.

"And don't forget that the Game 1 starter is also in contention for the Game 5 starter as well, so that's also important."

"But the way that the series is mapped out schedule-wise, the Game 1 and 2 starter could also be the Game 5 starter, so we have that little wrinkle or option there too."

Strasburg was the Opening Day starter. He made the first start of the second half. 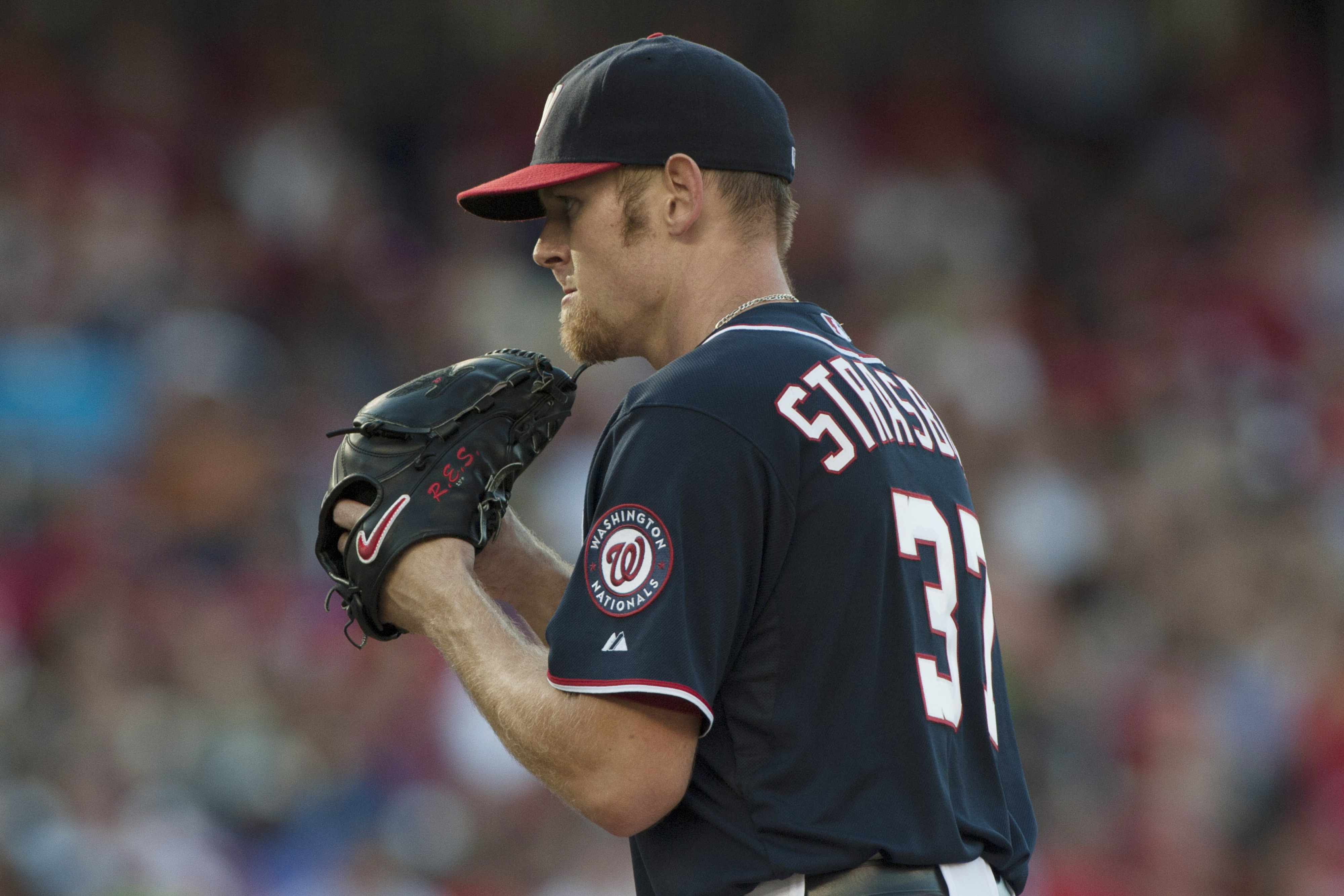 Before he was shut down in 2012, in an interview at the All-Star Game that summer, the right-hander was asked by former Nats' GM Jim Bowden if he would want the ball in Game 1 of the World Series if they made it there that year?

"Well, they’re gonna have to rip the ball out of my hands," Strasburg responded. "That’s all I can say."

The Nationals took the ball out of his hand that September. Strasburg watched from the dugout as his teammates battled the St. Louis Cardinals in the NLDS.

This time it looks like the Nationals will hand the ball to him and send him out to the mound.