Miss the Nats' afternoon/evening tilt with Los Angeles Wednesday? It was one for D.C. baseball lore, as the Nationals persevered through two blown saves to take the final game, and series, against the N.L. West-leading Dodgers. Let's check it out key plays using .gifs.

Share All sharing options for: Reliving fourteen in Chavez Ravine: Nationals win 8-5 over Dodgers in 14 innings

Most every Nationals fan that looked at the matchup thought it: "Carlos Frias? Against Jordan Zimmermann? Some Dodger regulars out? This is setting up nicely." And in the end, things worked out: Washington secured a big victory to take two out of three from the Los Angeles Dodgers on the road.

Of course, you already know the path to victory wasn't easy, or without anxiety.  It took 14 innings of baseball for the good guys to come home with the curly W, and there was some good, bad, and ugly along the way. Because of the early start time, the Nats' recent history of shakily closing out games, and the Nats' also recent history of never giving up/surrendering, it seemed like a good opportunity to do a retrospective on the game. So, here are some highlights, observations, and real-time reactions from today's game.

Little did Nats fans know it at the time, but Justin Turner (who started at third in place of Juan Uribe) would be downright McCutchenian against Nats hurlers today. Well, he was aided a bit, but we'll get to that later. Anyway, with none on and two down in the bottom of the second against Zimmermann, Turner stepped up and struck a single to right on a fastball that missed its location:

Nothing came of it, since Dodgers' rookie Joc Pederson struck out looking on the next at-bat. But the seed was planted, foreshadowing future impact over the course of a long afternoon and evening.

About that Dodger pitcher. The Nats' final baserunner against Frias owed to Jayson Werth's bloop single with two down in the top of the 3 -- not exactly the best way to create offense against a guy who didn't have great minor league numbers, as Bluelineswinger pointed out.

Fortunately for the Nats,Dodgers' manager Don Mattingly pinch hit for Frias in the bottom of the sixth. After Darwin Barney walked, Zimmermann benefited from a big double-play lineout from Dee Gordon. A key defensive hold can sometimes get an offense rolling, but the Nats' couldn't push anything across the plate in the top of the 7th. Zimmermann returned to the hill in the latter part of that inning, where Turner would again bat.  Dodger fans were anxious for runs:

Well, this is happening at Dodger Stadium #dodgers pic.twitter.com/fbWJkc8uX5

Here we go again. This time, Turner stepped to the plate with Carl Crawford on second. A great ranging play from Denard Span kept Hanley Ramirez, who batted before Crawford, from an extra base hit: 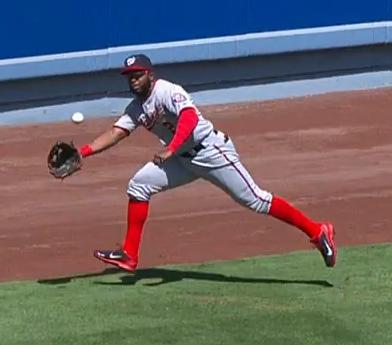 Zimmermann's gopher ball moved about an inch less inside to Turner than every other fastball had during the at-bat, which apparently was enough to keep the ball off Turner's hands and into those of whoever hangs out behind center field at Chavez Ravine.  It was bubble party time in the Dodgers' dugout, and Nats' fans -- given the poor showing against L.A.'s hurlers to this point -- were justifiably skeptical:

Bryce Harper continued his hot-hitting ways, and suddenly Adam LaRoche popped out of the dugout (apparently without his own bat) to pinch-hit in, to understate things, a key situation.

On a 2-1 count, catcher A.J. Ellis set up inside for a fastball to tie up LaRoche: 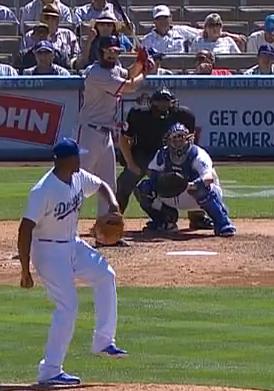 The pitch never made it there.  Instead, LaRoche tracked it outside, made solid contact, and tied the game up with a two run jack:

If those aren't the best photoshopping skills you see today, then I don't know what to tell you.

In any case, the Nats weren't done. A Jose Lobaton single through the right side afforded pinch-runner Danny Espinosa the chance to steal second, which he did. Span then did what Span has done since the middle of June, giving Washington the lead for the first time. In a year of comebacks, this one -- at the end of a long road series, against a top-tier closer with two hitters who had been scuffling of late, and with no sign of offense all day -- felt the most far-fetched. 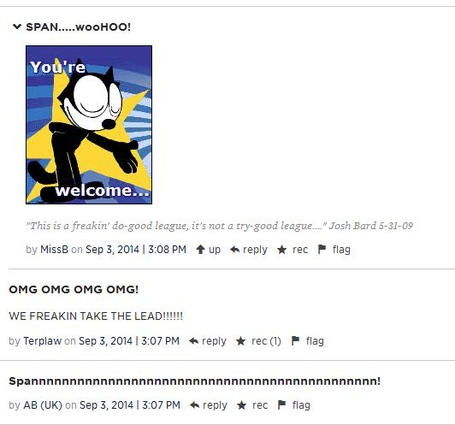 Sadly, it wasn't to last.

Brent Musberger has a saying so famous that it has made its way into a drinking game (Rule #4) -- "there's that man again." The phrase describes someone who appears multiple times in a game and affects the game in some positive manner. That man, at least to this point in the afternoon, was Justin Turner. But in an inconceivable turn of events, the Nats got him to send a seemingly-harmless fly ball to Werth in right for the final out of the game. Work's done!

Charlie and Dave talked about it on the radio, but you feel for Werth. He's played hard, and been productive, all year. Maybe this would still turn out okay, though, the optimist in me thought. Yet seeing Either appearing to grin all the way around third, knowing they got away with one, hurt: 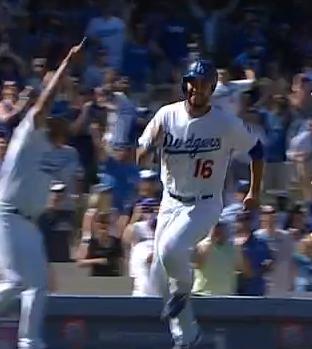 Soriano -- who for all his high wire act-ery since the All Star break, had this saved -- refocused and got a big out in Pederson (again), sending the Nats to extras.

Washington would have a good opportunity in the eleventh, putting runners on second and third with two outs and Span at the dish, but Jamey Wright induced a ground ball to first to end the threat.

L.A. countered with their own version of snatching defeat from the jaws of victory in the bottom of the eleventh, as Jeremy Blevins pulled a Rocky out of his hat to escape a one out, bases loaded jam. Unreal. Dark shirt dude's hat was never seen with a flat brim again:

LaCool.  And Dark Shirt dude's hat made it!  At least until after this, probably. 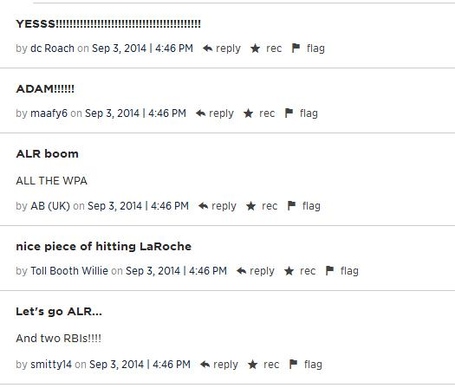 Crawford stepped to the plate with two outs and Uribe -- the guy we were glad to have out of the starting lineup -- at the bat. On a 1-1 fastball, the Dodgers' outfielder ripped a home run to left center, tying the game. Seriously.

Note both the cross-section of disbelief AND the wily Dodger fan on the left making a dash for the parking lot, content to have sat through four and a half hours of baseball with no obvious resolution: 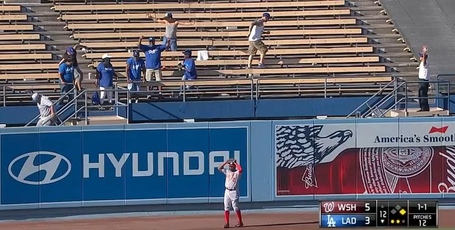 Wiley Dodger fan.  And just kidding -- he was actually running after the ball (there goes the narrative). After the Nats avoided a winning-run-at-third situation with two outs in the bottom of the 13th with a great play by Blake Treinen on a Dee Gordon bunt, the game entered "well into darkness territory" (which is a more precise time measurement than you'll find on a Rolex) on the East Coast.

There's that man again. By this time, many of-age Nats fans probably wanted to either start playing the Brent Musburger drinking game, or were glad they never started. That man, Justin Turner -- nemesis of the Nats during the EST afternoon -- would have a chance to spite D.C. again. Instead, he sailed a routine throw wide of first and allowed Ian Desmond to reach base:

This is a key play to me because it sets in motion some really fun stuff (for Nats fans). You see, the game is coming full circle here, and the inevitability of Harper drawing a walk, Correia throwing a wild pitch, and LaRoche -- for gosh sake, and again, he didn't even have his own bats in the dugout -- stepping to the plate for some heroics was sensational.

Drama comes in different forms, of course. LaRoche's fielders choice to shortstop looks pedestrian in the box score, but bad wheel, back and all, ALR hustled it out to allow the go-ahead run to score over five hours after first pitch:

The Federal Baseball community was right on top of LaRoche's accomplishments, which must go down in the short history of great Nats performances of all time (where does it rank for you?). That, of course, wasn't all, because Asdrubal Cabrera -- the focus of an article originally planned for today -- stepped to the dish and blasted a two-run tater to give D.C. a three run lead.

The consequences were clear: 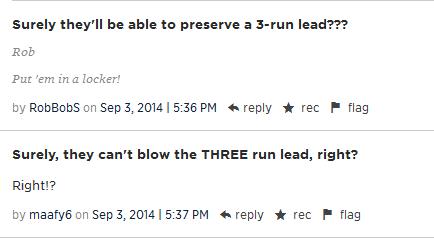 You wonder at points like this if another Dodger comeback would have broken Fangraphs' leverage index tool on the game's box score, it having already red-lined on roughly a half-dozen occasions.  Fortunately, we didn't need to find out.

I can't even remember who was catching at this point -- maybe wiley Dodger fan found his way to the clubhouse and suited up -- but whoever it was set up outside for an 0-1 offering to Crawford. Treinen put it there, and Desmond and LaRoche did the rest.

It wasn't exactly an off-the-radar type happening like Mark Burhele's perfect game back in 2009 was; both teams are October bound and had caught the attention of many national commentators.

Still, it's hard to escape the event this was. Many followed throughout various gamethreads in the Natmosphere, and many more followed from work, on the drive home, while walking the dog, running, cooking dinner, or simply just in front of the T.V. (or maybe all).  It's place in our minds is, of course, up to each of us, but the length and oscillating chances of pulling it out -- and the ability to continue pushing for a win despite several Tyson-esque gut punches -- make for great theater. Cherish it.