Washington Nationals' closer Rafael Soriano blew his seventh save of the season Friday night in what ended up a 9-8 loss to the Philadelphia Phillies. After the game, Matt Williams said something had to change: "We need to address it."

Share All sharing options for: Nationals' closer Rafael Soriano blows seventh save: "We need to address it." - Matt Williams

Washington Nationals' right-hander Rafael Soriano gave up three hits, two of them home runs and three runs total, all earned, in ⅔ IP on Friday night, blowing his fifth save of the second half.

Soriano took the mound with the Nats ahead 7-4 at home in Nationals Park, surrendered a two-run homer by Phillies' catcher Carlos Ruiz and a solo blast by Philadelphia's leadoff man Ben Revere then left what was suddenly a 7-7 game between the NL East rivals in the nation's capital.

"I don't see anything that's consistent with [Soriano's] lack of success. His velocity is as good as it has been all year. Balls are up in the zone a little bit..." -Matt Williams on Nats' reliever Rafael Soriano's struggles

Particularly frustrating for everyone involved on the Nationals' side, was the fact that the home run by Revere was just the second of the five-year veteran's career.

It took the 26-year-old Phillies' outfielder 1,466 plate appearances to hit his first major league home run earlier this season and 366 PAs before he connected on his second, taking a 2-2 slider from Soriano to right and over the high Curly-W wall into the stands.

Ruiz's home run went out to left, just clearing the wall. It came on an 0-2 slider that the Nats' closer left up inside to the right-hand hitting backstop.

"I think it was two breaking pitches that I threw and that was how the game was tied and one of the reasons I didn't do my job tonight," Soriano said after his second consecutive blown save and his seventh in 38 save opportunities this season. 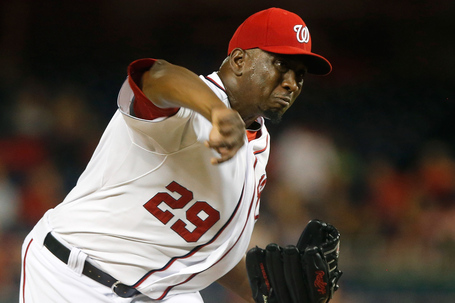 "He worked his way through the inning other than those two swings. But I mean, Revere hit a two-strike pitch over the fence, I mean it's his second homer of the year. So it's odd, but I don't see anything that's consistent with [Soriano's] lack of success. His velocity is as good as it has been all year. Balls are up in the zone a little bit, I think, but it's hard to hit homers."

"That is my job in the ninth," Soriano said, "and right now it's not too easy to do it and I know I have to do it better and I have to figure out what's going on right now and do it better."

"It's not an easy decision. We want to be able to close those games out. And so, [Soriano] understands that, he's been around the block." -Matt Williams on making a change at the back of the Nats' bullpen

While Williams has been adamant in recent weeks about sticking with Soriano in the ninth inning, tonight he said something needs to be done.

When the Nats' skipper was asked after tonight's extra innings loss if there would be a change at the back of the Nats' bullpen, he said, "We'll address it, yeah. We need to address it. The workload for the bullpen over the last couple days has been huge. So we'll have to work our way through it, but yeah, we need to address it."

"It's not an easy decision," Williams continued, but after the third blown save in the right-hander's last five opportunities it's apparently time.

"We want to be able to close those games out. And so, [Soriano] understands that, he's been around the block. We look back to the game in L.A. and the ball that Jayson [Werth] missed, it could have been caught, and that would have potentially boosted his confidence, but tonight the balls are just up in the strike zone. It's not that easy to hit a ball over the fence, but we're certainly going to take a hard look at it."

"Whatever [decision] he makes, I'll be with him because one of the reasons that I like him so far is we have good communication." -Rafael Soriano on Williams' comments about closer role

"Whatever [decision] he makes," Soriano said, "I'll be with him because one of the reasons that I like him so far is we have good communication."

"We'll talk to him about it and look to address it tomorrow, see where we're at," Williams said. "Again, everybody has pitched, so we'll have to piecemeal our way through that one tomorrow, but we'll certainly talk to everybody about it."

"The good thing about it we've got guys that have done it before. [Tyler Clippard] has done it. Drew [Storen] has done it. Matt [Thornton] has done it, so it's not something that's new or foreign to any of the guys. We'll look at it. We've got confidence in everybody on our club, but Sori has been struggling a little bit, so we'll have to look to land him a little softer maybe for a few days and see where we're at."

Will one of the relievers get the job for now? Closer-by-committee?

• We talked about Soriano's struggles, who should take over in the ninth and what else went wrong on Friday night on Nats Nightly: