Washington Nationals' first baseman Adam LaRoche hit two home runs. Scott Hairston got a start and hit an important sac fly. Drew Storen took the mound in the ninth and shut the door and the Nats avoided the sweep with a 3-2 win over Philadelphia.

Scott Hairston started in left for the Washington Nationals in the series finale with Philadelphia this afternoon, with Bryce Harper sitting for the fourth straight game against Phillies' lefty Cole Hamels.

In Hairston's career, before today, the 34-year-old pinch hitter and backup outfielder was 18 for 46 (.391/.440/.826) with five doubles and five home runs in 50 career plate appearances against Philly lefty Cole Hamels.

"He's got good numbers against Hamels and has seen him well and has hit him well over time, so we want to give him that opportunity for sure." -Williams on starting Hairston vs Hamels again

Hairston flew out to deep left in his first at bat, nearly hitting one out, K'd swinging the second time up and then in his third at bat in the sixth, hit a sac fly to left field that looked like it was gone off the bat. It didn't go out, but it was deep enough to score Ian Desmond from third for what ended up being the winning run in the Nats' 3-2 win.

Bryce Harper came on as a defensive replacement in the top of the seventh. Hairston ended the day hitless against Hamels, but his sac fly helped the Nationals salvage the third game of three with the Phillies, after dropping the first two.

"You'd have to ask him," Nats' skipper Matt Williams said after the game on Sunday with "him" being Hairston, "but I don't know if he can hit two balls better than he hit today. Ordinarily, I think those two balls have a really good chance of leaving. The first one [was] caught against the fence and the second one I thought there was no chance for it to stay in the ballpark. He hit them both really good. The ball wasn't really carrying to left, for sure. But he's got good numbers against Hamels and has seen him well and has hit him well over time, so we want to give him that opportunity for sure."

Adam LaRoche, who dealt with a lower back issue, a sore elbow that was hit by a pitch and flu-like symptoms in the last week, started the game 10 for 39 (.256/.310/.590) against Hamels with a double, four home runs, two walks and 11 Ks in their respective careers.

By the end of his second at bat, LaRoche was 12 for 41 with six home runs off the left-hander, having taken Hamels deep twice, on a first-pitch cutter in the bottom of the second that landed in the right field bullpen and tied things up at 1-1 and a 1-1 fastball in the fourth that landed in the seats above the far left side of the out-of-town scoreboard in right field, tying it up at 2-2.

LaRoche ended the day 2 for 4 with two home runs and almost hit a third one out, and he did it all in spite of all the recent issues. Williams said playing through that stuff is just part of the game.

"That's part of a whole season," the major leaguer-turned-manager said. "That's part of playing every day. You're not going to feel 100%. Maybe Opening Day, but that's about it. It's part of grinding through a whole season. We've been trying to give him some days and some rest when we can and he's responded to that, his back is feeling a little bit better, so that's a good sign that it's not something that's going to stay with him long-term. He's got good power numbers against Hamels too, not a whole lot of hits, but good power numbers."

LaRoche's second home run tied it up after four and Hairston's sac fly in the sixth put the Nats ahead, but they were unable to add to the one-run lead, so in the top of the ninth, Williams turned to Drew Storen, giving the 27-year-old, '09 1st Round pick the first save opportunity since deciding to back off Rafael Soriano in the ninth until the right-hander sorts things out on the mound.

"We figured that [Carlos] Ruiz and [Marlon] Byrd are both going to hit," Williams said in explaining his thought process in going with Storen to reporters after the right-hander saved his second game of the season.

"They're not going to pinch hit for either of those guys, so that dictated Drew. And of course, we thought we would get [Ryan] Howard, but since he got through those two guys well, then we just left the inning to him. He pitched really well. Got Byrd and Howard with breaking balls. So, he came in there and shut the door."

There were other options for the ninth, the manager said, but, "today set up good for Drew and he did his job and closed it."

Ruiz line out to left on a full-count pitch. Byrd chased an 0-2 slider outside. Howard K'd swinging over a full count changeup inside. 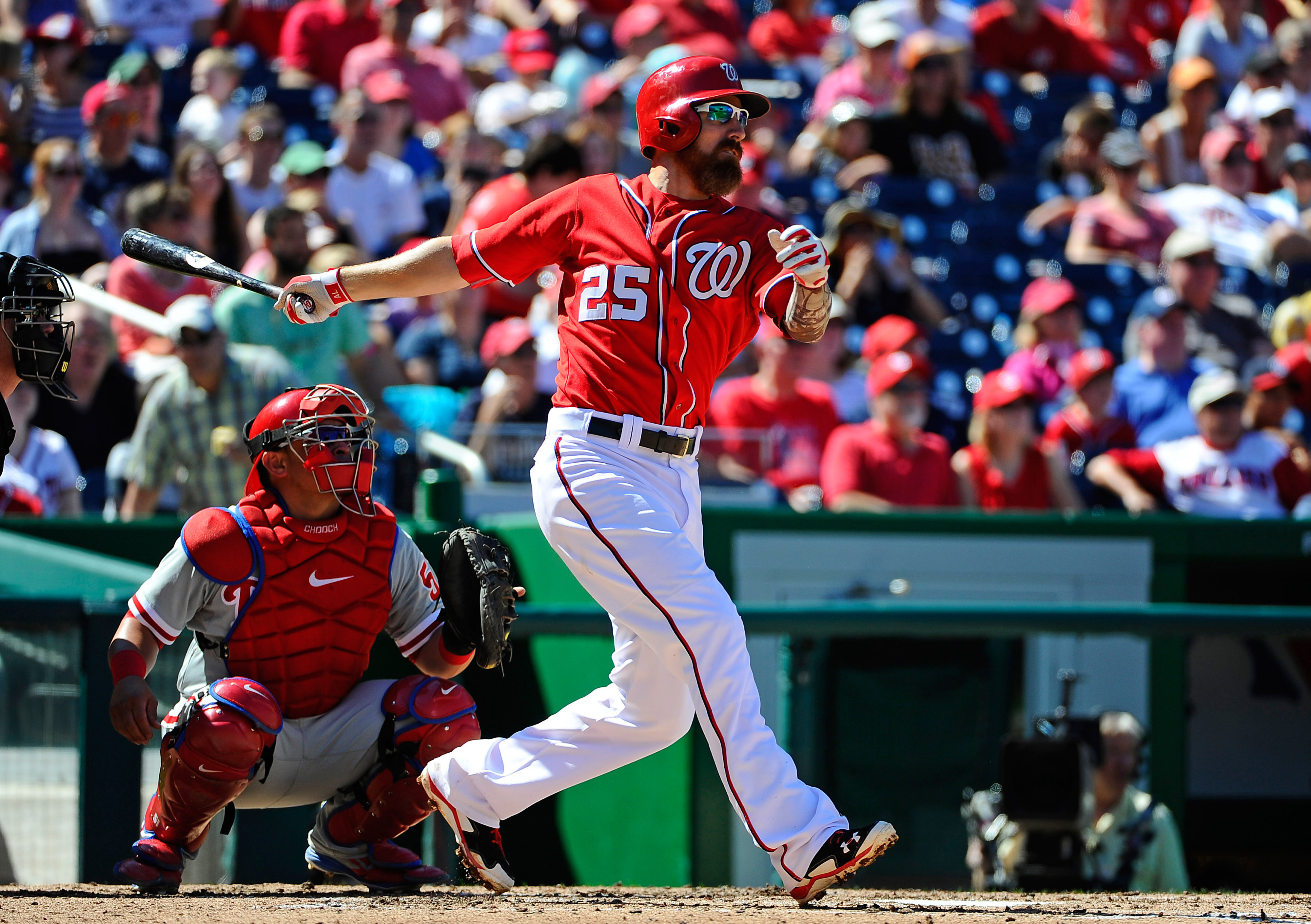 Storen needed 17 pitches to retire the Phillies he faced in order and help the Nationals avoid getting swept.

"I think he uses his changeup effectively to lefties," Williams said. "He doesn't throw it a lot to righties. I think he threw one to Byrd on a 2-2 pitch, but it's just balls going different directions, which is good, he's got all those pitches to work with."

After a few weeks of wondering if Soriano would hold on and get the job done, Storen's efficient outing was a stark contrast. The Nats' first-year skipper pushed all the right buttons on Sunday and pulled all the right levers and the Nationals improved to 80-61 on the year while ending a five-game losing streak against their NL East rivals from Philadelphia.

• Dave Nichols from the District Sports Page, FBB's Doghouse and I talked about the Nationals' big win, Storen's save and LaRoche's blasts on the latest edition of Nats Nightly: