The Washington Nationals released their 2015 schedule this afternoon. It all starts up again on April 6th in the nation's capital with the 82nd home opener since 1901. The New York Yankees will visit D.C. as well. Full 2015 schedule is below...

On Monday April 6, 2015, the Washington Nationals will open their 2015 campaign at home in the nation's capital, where they will take on the New York Mets in the first game of a season-opening three-game set.

The Nats announced their 2015 schedule today.

They will open the season against the Mets in April and end it in New York in October.

Between those two series, there are plenty of highlights on the home-half of the schedule including a late-September (21-23) three-game series with the Baltimore Orioles in Nationals Park. 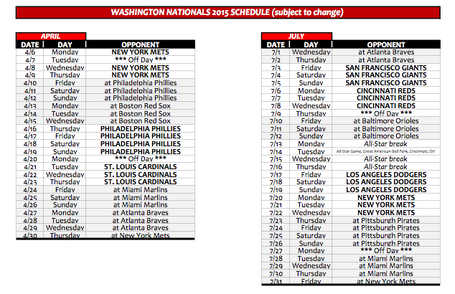 The Nationals will take on AL East teams in twenty Interleague games. The first such series in D.C. is a three-game set with the New York Yankees from May 19-20. The Toronto Blue Jays (June 1-3) and Tampa Bay Rays (June 17th and 18th) will visit the Navy Yard as well. 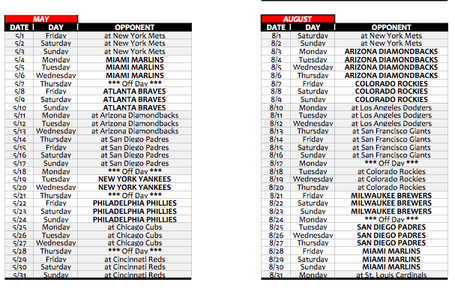 Washington will also return to Fenway Park in Boston this season to take on the Red Sox in an early-season series from April 13-15 as part of the first road trip on the 2015 schedule. 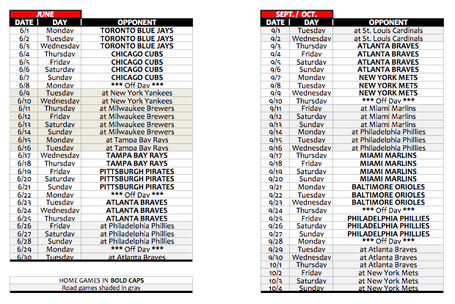 As the Nationals note in their press release this afternoon, of the twelve homestands next season, only one will last ten games or more, when the Nats host ten games in eleven days during the final homestand of the season from September 17-27 when the Miami Marlins, Orioles and Philadelphia Phillies will come to Washington.

The final road trip of the season starts in Atlanta before the Nationals finish up in Citi Field.