Washington Nationals' slugger Bryce Harper talked after he was named the NL MVP about everyone who helped him to become the player he was in 2015. Nats' GM Mike Rizzo talked about Harper's big season and his future in the nation's capital.

In addition to thanking the Baseball Writers' Association of America and his family after he was unanimously voted the National League's Most Valuable Player, 23-year-old Washington Nationals' slugger Bryce Harper singled out some of the teammates who helped him during his historic 2015 campaign.

"Being able to have guys, Ian Desmond, Jayson Werth, the two guys that pushed me all year," Harper said, "pushed me last year, have done things for me that I couldn't imagine my teammates doing for me. I can't thank them enough.

"Can't thank Scott Boras, Mike Rizzo, Mr. Lerner [enough], for them just giving me the opportunity to play the game every single day and my fans in D.C., you guys are the best fans in the world, and I'm truly grateful for you guys, thank you so much."

"Matt Williams helped me out every single day. With swinging, with approach. He was unbelievably smart with that process and I give him a lot of credit..." -Bryce Harper on Matt Williams helping him with his offense

"Matt Williams helped me out every single day," Harper said.

Both teammates Harper mentioned had good things to say about him as well as the season wound down.

"Kid's showtime," Desmond told reporters in September. "He rises to the occasion. It's fun to kind of watch his maturity over the last few years. He's turned into quite the beast."

In spite of his own personal and the team's struggles in 2015, Desmond said there were positives to take away from the season, likely his last in D.C. now that he's a free agent.

"I think one of the bigger ones is kind of watching [Harper] grow up a little bit," he said. "It's been fun to play a part in his career."

"I'm really proud of him," Werth said. "He had a great season. MVP-caliber season. You don't see those too often. I've been playing however many years now, I've seen one. So we'll see if this is two. But he's been great, I think he's come a long way in a short period of time, and I think he's going to be a big part of this club going forward and it's been a pleasure to play with him."

Harper elaborated on the support Desmond and Werth provided for him when he spoke on a conference call after learning he was, in fact, the 2015 NL MVP.

"He's gone through his trials and tribulations. He's maturing on a national stage his whole career and the expectation level was always extremely high..." -Mike Rizzo on NL MVP Bryce Harper on the MLB Network

"I know this guy’s not in our clubhouse at this moment, but just not taking the game so serious, doing everything I can on a daily basis to have fun and enjoy it — enjoy the time that I play.

"I respect Desi more than anybody. This guy is somebody that I truly look up to as a person, and I can’t thank him enough for everything he did for me this year."

"Jayson Werth, he’s like a brother to me, he’s definitely family. I can’t thank him enough for taking me under his wing at the age of 19 and doing everything he could. He’s somebody that I truly love playing with and I’m very excited to be able to get back with him next year and the next couple years. He’s taught me so much about how to approach the game, how to win ballgames, how to play in the postseason, how to play the game the right way every single day. The guy’s been around the game for a long, long time, and I can’t thank him enough for everything he does, if that’s taking me out to dinner, if that’s hanging out with me in the clubhouse or telling me what a pitcher’s doing, his tendencies, all around the game. He knows it. It’s been a lot of fun."

In an interview on the MLB Network's Hot Stove show on Friday, GM Mike Rizzo talked about the personal growth he's seen from the Nats' 2010 no.1 overall pick over the last few seasons as Harper has developed into an MVP-caliber star.

"He's gone through his trials and tribulations," Rizzo said. "He's maturing on a national stage his whole career and the expectation level was always extremely high for him and he's worked hard to hone his skills and become the player he has and he's really become an all-around good baseball player who has offensive skills off the charts and became a Gold Glove-caliber right fielder this year and really stepping up to become one of the leaders of the clubhouse."

Asked again about the possibility of Harper getting a long-term deal to keep him in the nation's capital beyond 2018, when he'd be eligible for free agency, Rizzo said there is a lot that goes into that type of deal.

"It's part of the new baseball," he explained. "With these enormous contracts, they're long-term, they're extremely expensive. The percentage of the total payrolls come into play. It depends on what payrolls you're looking at, it kind of dictates how much you can allocate to a single player. I think the most important part of this discussion you guys are having is, you've got to sign the right guy. He's got to have the right attitude, the right character, he's got to be the type of person that you feel can handle that big of a load of expectations, handle the money, is always an issue, and handle the power of being the face of the franchise. I think that lesson no.1 is get the right guy.

"Have it be the right type of person that you want that will handle the mantle of that big enormous contract and the enormous expectations that come with it and pick the right character guy to do it."

Has Harper shown he's that kind of player and person? He was asked about a potential long-term extension as well and what it might take to get such a deal done? 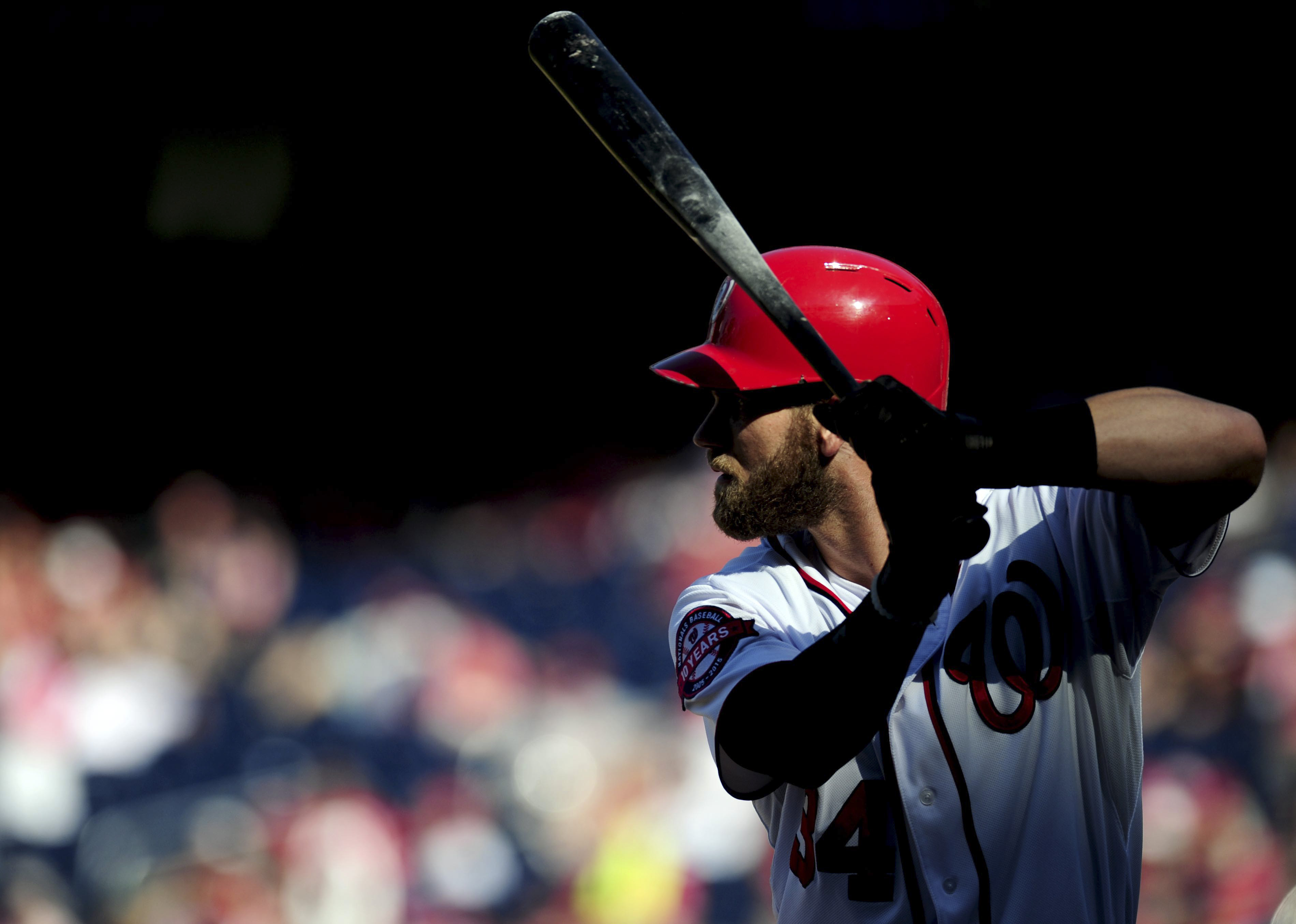 "Definitely very excited to be a part of the Nationals organization," Harper said, as quoted in the Washington Post:

"Being able to play in that stadium, being able to play for this city, this town, being around this city — it’s such a great place to play, it’s a monumental town, everything happens there, and I think baseball is up-and-coming. I think the things we’ve done the last couple years have been a lot of fun for us. I think as a team, as an organization we’ve grown into an elite team and I think we’re just gonna keep getting better and better. Mike Rizzo’s done a great job with this team, and the hiring of Dusty Baker — I mean it’s going to help put us over the top. So definitely excited about the up-and-coming years and very excited to further my career as a National. But I have a couple more years in D.C. and hopefully at the end of that, we can do what we can and maybe be a National for life, we’ll see."