Back in the day, Baseball America projected lineups a few years in advance along with their lists of each organization's top prospects. So what did BA's scouts and writers predict the Washington Nationals' lineup would look like in 2016? Let's take a look...

Share All sharing options for: Washington Nationals' 2016 lineup... as projected in 2012

Just for the fun of it, and since there was nothing much else going on Washington Nationals-wise today, we took a look back at Baseball America's list of the Nationals' Top 10 prospects from December 2012, (Top position player/prospect: Anthony Rendon. Top pitching prospect? Lucas Giolito), which included the projected lineup for the 2016 version of the nation's capital's Nationals. What lineup were BA's writers/scouts predicting for the future Nationals at that point?

On Opening Day 2016, ¾ of that infield could be in place. Predicting Ryan Zimmerman's eventual move to first base was probably not too difficult considering his age and the fact that the Nationals had drafted Anthony Rendon a year earlier and talked him up as a potential Gold Glove-winning third baseman.

Danny Espinosa could, in fact, end up starting at second or short in 2016, depending on what the Nationals decide to do with Yunel Escobar and Trea Turner. Do they sell high on Escobar this winter or bring him back at short/second?

The plan when the Nationals acquired the veteran infielder last winter was to move him to second and though he did end up at third with Rendon's availability limited by injury, General Manager Mike Rizzo recently reaffirmed the Nats' plans for Rendon to play third base next season.

Ian Desmond's not coming back... or at least it doesn't seem likely right now.

So does Escobar start at second base with Espinosa at short until Turner gets an opportunity to play every day in the majors or does Turner, who put up a combined .322/.370/.458 line in 116 games and 500 plate appearances between Double and Triple-A in the San Diego Padres and Nationals' systems in 2015 before he was called up to make his MLB debut, start the season in the big leagues?

Where does Wilmer Difo, the top infield prospect in the organization before Turner's acquisition, fit into the Nationals' plans for 2016? Will the Nationals add the left-handed bat they're believed to be after in the form of an infielder (someone Ben Zobrist-ish)?

Wilson Ramos, barring a deal for a catcher who supplants the big backstop, will be back in 2016 in spite of his less-than impressive offensive numbers in a full season in 2016 in which he (caught two no-hitters and) finally avoided any injury setbacks.

As for the outfield? Apparently BA's writers figured Jayson Werth, who'll turn 37 in May, would be transitioning into a backup/fourth outfielder role by this point.

Werth, who will earn $21M in the next-to-last year of the 7-year/$126M contract he signed with the Nats in December of 2010 still figures to be the everyday left fielder this season... as of now.

Brian Goodwin, like Rendon another 2011 first-round pick, turned 25 earlier this month, but isn't really in the picture at this point when it comes to the major league outfield, having been surpassed by Michael Taylor, who, as of right now, figures to be the everyday center fielder in 2016 now that Denard Span is a free agent.

Bryce Harper, coming of his MVP-worth campaign in 2015, is pencilled in as the starting right fielder as projected by BA's authors.

As for the rotation? Max Scherzer was added to the mix last winter. Stephen Strasburg got healthy after a few DL stints last season and pitched like the no.1 starter BA projected him to be in 2012.

Gio Gonzalez remains in the rotation after he was acquired from the Oakland A's in December of 2011 and signed to an extension which pays him $12M in 2016 and includes $12M club options for 2017-18.

Jordan Zimmermann and the Nationals never agreed to an extension so he'll likely pitch for another organization for the first time in his career next season.

In spite of some success as part of the rotation in 2012 and an impressive postseason start that Fall in the NLDS, an injury-shortened 2013 campaign and unsuccessful stint in the bullpen in 2014 eventually led the Nationals to deal their 2007 1st Round pick last winter.

As of now, Tanner Roark and Joe Ross appear likely to fill out the rotation.

Rizzo said he was comfortable with both of them behind Scherzer, Strasburg and Gonzalez, though rumors of interest in an additional starter have come up. 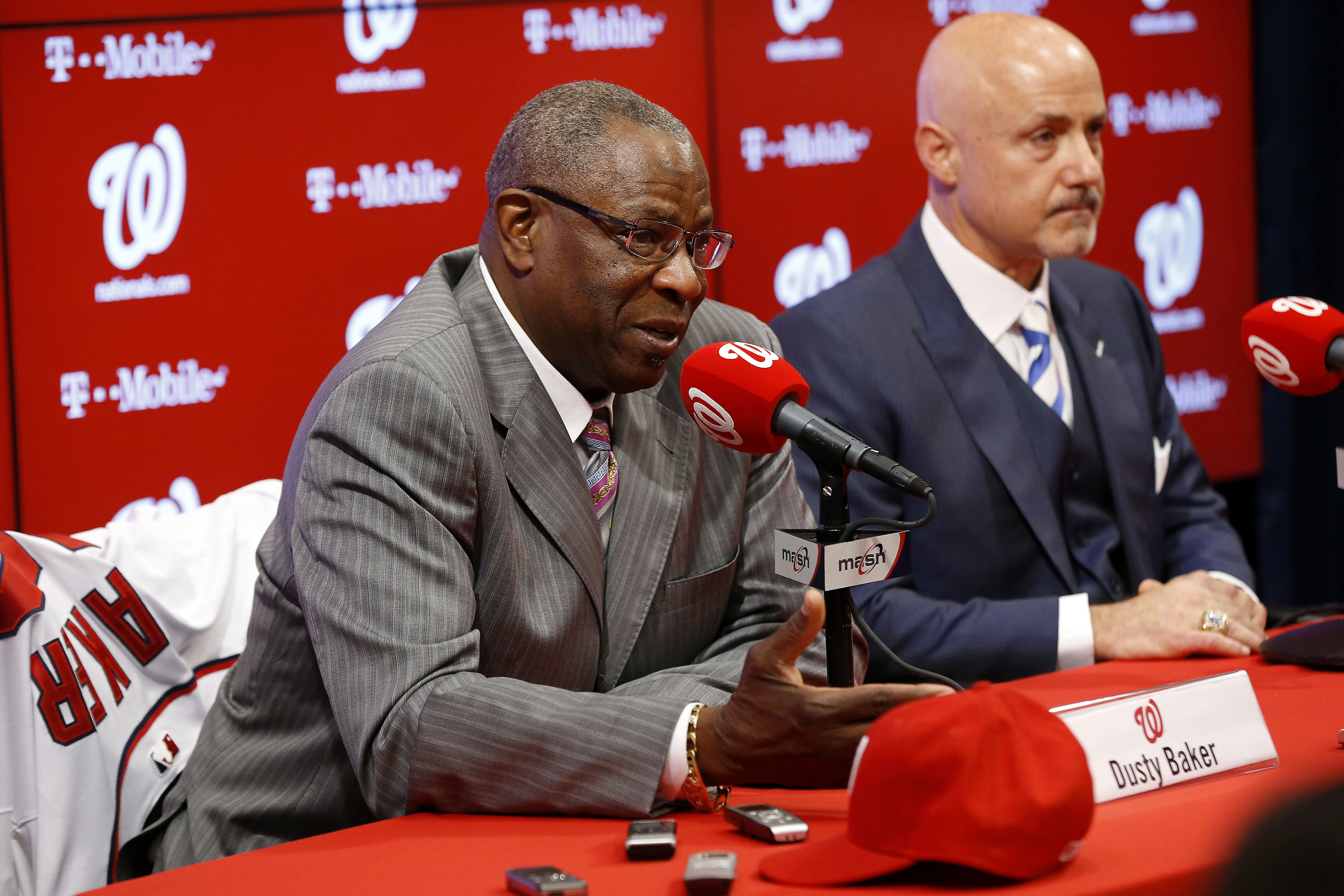 The closer's role? Will Drew Storen even be a Washington National by the time the winter is over?

Any chance he ends up back in the closer's role? In D.C. that is...

Will the Nats rebuild their bullpen and part ways with both Storen and Jonathan Papelbon as some are predicting?

What will the 2020 Nationals' lineup look like? Unfortunately Baseball America no longer includes their projected lineup with the prospect lists. Will Harper still be in D.C.? Will Lucas Giolito be a no.1 starter? Gaze into your crystal ball and see what you see...