The Washington Nationals bid for Ben Zobrist's services, talked about a trade for Brandon Phillips and they're now reportedly talking to representatives for free agent infielders Daniel Murphy and Howie Kendrick. Apparently they believe they need a second baseman.

In the wake of the Washington's failed bid to sign Ben Zobrist, who chose to play for the Chicago Cubs, Nationals' GM Mike Rizzo talked to reporters at the Winter Meetings about finding a left-handed bat to bolster the Nats' lineup.

Zobrist, Rizzo said, was a good fit at second base in the nation's capital, but he signed on with Chicago to play for his old manager from Tampa Bay, Joe Maddon.

"There are different avenues," Rizzo said, when asked where he'd turn next.

"There are different avenues. The trade avenue that we've looked hard into and also there are several free agent options out there too..." -Mike Rizzo on Nationals' pursuit of a left-handed bat

"The trade avenue that we've looked hard into and also there are several free agent options out there too. So we're looking to improves ourselves any way we can."

Asked if the Nationals were focused specifically on adding a left-handed bat at second or in center, Rizzo said a left-handed hitter was ideal.

"In a perfect world, the lefty bat is important, but we want to improve our club," he explained. "And the balance in the lineup is an aspect, but it's not something that's the end-all and be-all, we'd like to be more balanced, but if we have a quality player that improves our lineup and improves our club, then we certainly are going to look at all aspects of it.

Last week, the Nationals and Cincinnati Reds were reportedly working on a deal that would bring Brandon Phillips to D.C. to play second base.

Phillips, a player with 10/5 rights, (ten years in the majors, the last five with one team) and the Reds couldn't work out a deal/compensation to convince the veteran infielder to waive his no-trade protection.

Former Nats' GM and current ESPN analyst Jim Bowden wrote as the trade talks were reportedly falling apart that the Nationals were turning their attention to other options.

Bowden mentioned free agents Daniel Murphy, Howie Kendrick and Texas Rangers' shortstop Jurickson Profar as potential targets since it didn't look then like the Nats and Reds would revisit the talks about Phillips.

In a report tonight, MLB.com's Bill Ladson writes that according to his sources, "... the Nationals have had dialogue with the agents representing free agents Daniel Murphy and Howie Kendrick."

Both Murphy and Kendrick turned down qualifying offers this winter, so signing either would cost the Nats their top pick in this June's Draft. 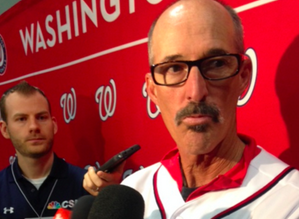 Kendrick, 32, played for the Los Angeles Dodgers in 2015, after spending his previous nine seasons with the Los Angeles Angels, putting up a .295/.336/.409 line, 22 doubles and nine home runs in a 2.1 fWAR season with LA's National League team.

Washington traded Yunel Escobar to the Angels this winter, after the veteran infielder played third base in his one season with the Nationals in 2015.

The trade left them with Danny Espinosa, Trea Turner and Wilmer Difo as the top middle infield options.

Do they need to find a left-handed hitting second baseman, in particular, or will any left-handed bat do? Can it be a second baseman like Kendrick, who's right-handed? Should they play Turner or Difo at second from the start?