Lucas Giolito said his teammate in Hagerstown, Wilmer Difo, was a "thrill to watch" in 2014. The Washington Nationals' top-ranked infield prospect is going to be in Spring Training with the Nats this season as he prepares for a big year in the system...

Share All sharing options for: Nationals' prospect Wilmer Difo is a "thrill to watch" and he turned heads in 2014

The Bob Boone Award is given each year, or at least for the last two years since its inception, to the one Washington Nationals' minor leaguer, "... who best demonstrates the professionalism, leadership, loyalty, passion, selflessness, durability, determination and work ethic required to play the game the 'Washington Nationals Way,'" as a Nats' press release on this year's recipient explained.

Wilmer Difo, 22, was the second Nationals' prospect to win the award after infielder Tony Renda in 2013.

"From a hands and feet and arm perspective, he has a chance to stay on the left side of the infield. We're going to continue to grind both sides..." -Doug Harris on MLB Network Radio on Wilmer Difo

"It feels absolutely great," Difo, a Dominican Republic-born shortstop/second baseman told reporters in the nation's capital in September, with the help of a translator, when he was at Nationals Park to receive his award.

"I wasn't expecting it. That's the reason why I worked so hard this year. That was the mentality this year, to achieve something like that, and I'm very happy that I was able to achieve it.

"The key to my success this year," Difo explained, was staying healthy and, "... working as a team and playing as a team.

Though naturally right-handed, Difo explained that he was actually, "... better from the left-handed side because he sees more right-handed pitchers. He doesn't see many lefties, so that's actually one of the things he's working on in the instructional league right now, focusing on getting better from the right-hand side."

Difo split his time between second base and short pretty evenly on defense, playing 66 games at second and 70 at short for the Suns and posting a .965 fld% as a shortstop and a .976 fld% as a second baseman.

"I actually feel really comfortable playing both positions," he said.

"He considers both his primary positions," his translator explained, "... but feels more comfortable playing shortstop, actually."

Doug Harris, the Nats' Assistant GM and VP of Player Development and Pro Scouting explained in an MLB Network Radio interview on Friday, why the Nats had prospects like Difo play different positions as they worked their way up.

"Wilmer’s a thrill to watch. He’s one of the most exciting players out there on the field. He gives it his all..." -Lucas Giolito on Suns teammate Wilmer Difo

"We played him about 50% of the time at short last year in Hagerstown," Harris said, "and from a hands and feet and arm perspective, he has a chance to stay on the left side of the infield. We're going to continue to grind both sides and we'll see where it takes us."

"We play guys on both sides of the bag very often early on. They learn both sides of it in the event that there's a need going forward. With [Difo], specifically, we sent him out early as a second baseman because we wanted him to build his confidence, very candidly, and we were able to do that and then we were able to expand on that and he had a really great year."

Difo played behind the Nationals' top pitching prospect, Lucas Giolito, all season in 2014 and learned to adjust, he said, to having such a talented starter on the mound.

"He said it was interesting because he felt like he was less active, he was such a good pitcher," his translator said.

"But they had to keep the mentality to stay active. Lots of groundballs, lots of flyballs, he didn't have to do much because he felt like it was so easy when Giolito was on the mound."

"Wilmer’s a thrill to watch," Giolito told reporters, when he too was honored, as the Nats' Minor League Pitcher of the Year in September.

"He’s one of the most exciting players out there on the field. He gives it his all every single [time]. I think he’s completely deserving of the Bob Boone Award. He completely embodies everything that represents. I’m really proud of him."

Difo was ranked 7th overall in the Nationals' system by Baseball America this winter, with BA's editor in chief John Manuel telling MASN's Byron Kerr that what really stuck out for him was Difo's low K totals. 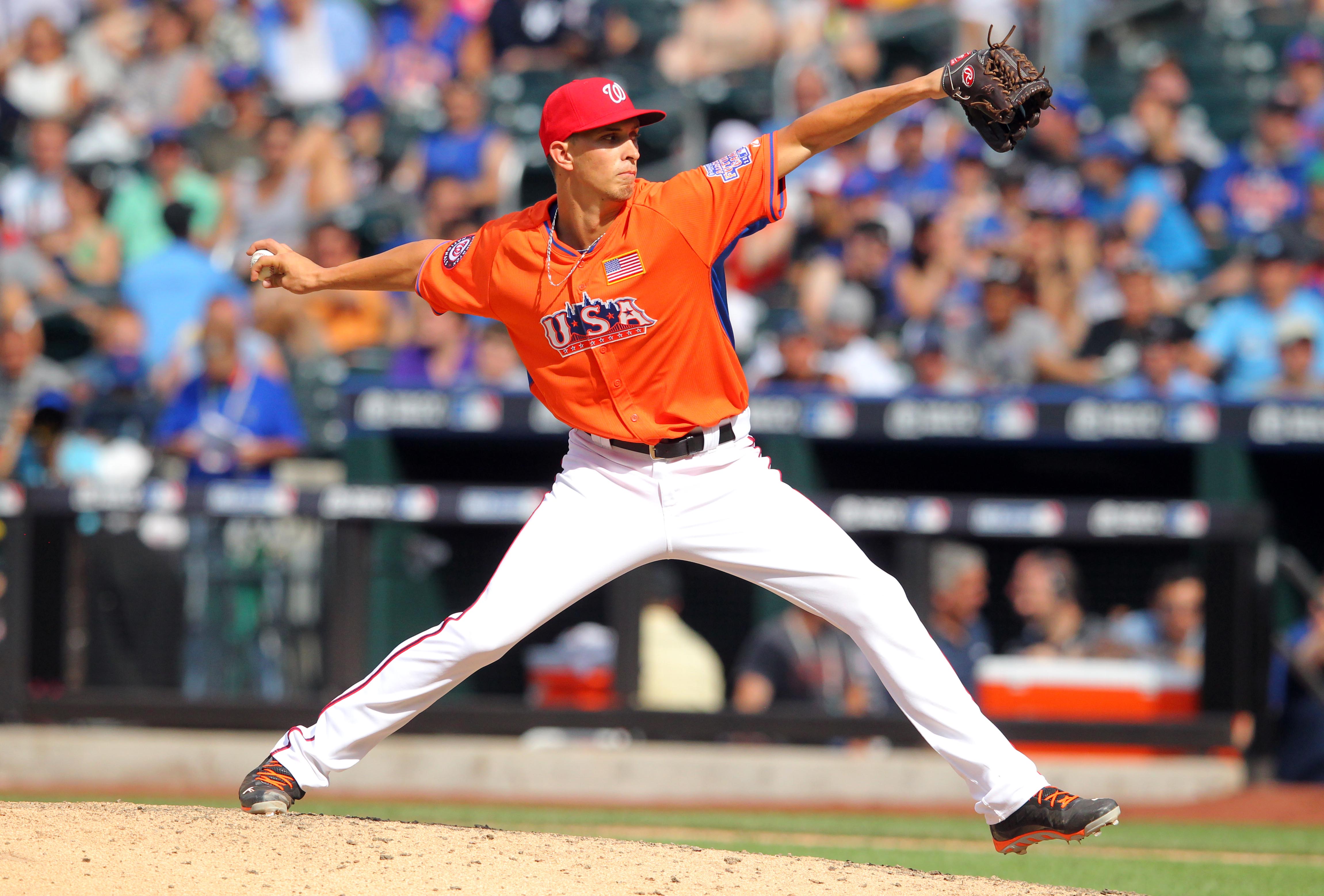 Difo was added to the 40-Man Roster in November to protect him from selection in the Rule 5 Draft, so he'll be in big league camp with the Nationals this Spring and GM Mike Rizzo talked about him one of the minor leaguers the Nats are excited about going into the 2015 campaign.

This [Wilmer] Difo kid," Rizzo said in an MLB Network Radio interview in January 2015, "who is a speed, power, defensive guy who was obviously only in A-ball last year, but a guy that turned a lot of heads this year and a guy that we're certainly going to count on in the future, but we'll see how far along he is when he comes to big league camp for the first time."