Matt Williams on Nationals' first baseman Ryan Zimmerman: "He catches everything... He doesn't miss a ball."

Washington Nationals' skipper Matt Williams was out on the field with Ryan Zimmerman and Ian Desmond yesterday, working with the infielders as Zim makes the transition to first base and his fellow infielders get comfortable with their new first baseman.

Share All sharing options for: Matt Williams on Nationals' first baseman Ryan Zimmerman: "He catches everything... He doesn't miss a ball."

As Williams explained to reporters afterwards, Zimmerman and Desmond are working to get more comfortable with one another now that they're no longer together on the left side of the infield with Zimmerman shifting over to first full-time this season. And it was the players' idea to put in the extra work, with Desmond looking to get more in tune with the Nats' new first baseman, who has been hard at work at his new position since he arrived for the start of Spring Training.

"His athleticism is key for us. He catches everything as you saw today. He doesn't miss a ball." - Matt Williams on Ryan Zimmerman at first base

"It's 100% voluntary," Williams said. "[Desmond] wants to get sense for Zim and Zim wants to get a sense for him. So we worked on Desi took balls at second base. That's a product of us employing a shift. He wants to get work there, that's something that you never really work on because you play shortstop. So that was the purpose of him being at second base today. And then of course he was out there to let Zim know where he wanted the feeds to be when Zim comes off the bag and we're trying to turn two. But yeah, it's 100% voluntary, but he's happy to do it."

Williams noted that he continues to be impressed with Zimmerman's ability, and the way he's handling the move after spending most of the last decade at the hot corner in D.C.

"His athleticism is key for us," Williams said. "He catches everything as you saw today. He doesn't miss a ball.

"The key -- like we talked about -- is him getting comfortable feeding the ball to second base. With positioning, we worked a lot on his foot position when he's catching balls from the infield today. We worked on some balls in the dirt, of course, like we always do. But it's just comfort-level for him. I'm always impressed by his athleticism and what he can do with his glove. The challenge is going to be him being comfortable over there and the throws to second base because it's just backwards." 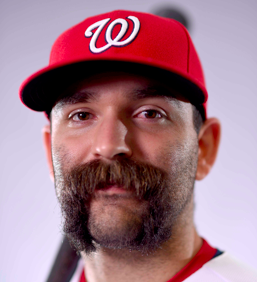 Part of getting Zimmerman comfortable is getting him used to the timing of his new position, so the Nats had the stopwatches out to help the 30-year-old infielder.

"Same with defense. If he understands timing and the time that the average runner takes from point of contact to get to first base, then he'll have a better sense of timing on at what point he needs to get to the bag, how quickly he needs to get there, what his timing is on throwing the ball to second base to return it to first to turn a double play."