Washington Nationals' lefty Gio Gonzalez was going strong through six innings last night in CBP, when he ran in trouble in the seventh inning of what ended up a 4-1 loss to the Philadelphia Phillies.

Share All sharing options for: Gio Gonzalez's rough seventh in the Nationals' 4-1 loss to the Phillies

Gio Gonzalez was cruising. Washington's 29-year-old starter was up to just 69 pitches with a 1-0 lead after six scoreless innings against the Philadelphia Phillies in Citizens Bank Park, but one out into the seventh, the Nationals' left-hander ran into trouble.

Gonzalez started up 0-2, but issued a free pass to Grady Sizemore when he missed with a full-count fastball outside and away to the left-handed hitter on the eighth pitch of the at bat.

Phillies' catcher Cameron Rupp started down 0-2 as well, but worked the count full in the at bat that followed, fouling off a 2-2 change outside (no.6 below), checking his swing successfully on a fastball up in the zone (no.7) and taking a full-count fastball low and away that Gonzalez spiked (no.8).

The second straight walk, and Gonzalez's fourth of the evening, earned him a visit from Nats' Pitching Coach Steve McCatty.

Gonzalez got ahead 0-2 on Phillies' third baseman Andres Blanco as well, but after Blanco fouled a nasty bender low and in (no.3) off his foot to stay alive, and Gonzalez missed inside with a second 0-2 offering he thought was a strike (no.4 below and screencap), before Blanco fouled off another curve low and was then hit by a pitch on Gonzalez's sixth offering, which loaded the bases and ended the lefty's night.

"He just lost the strike zone," Matt Williams said after the game, and after all three runners left on by Gonzalez (or their pinch runners) ended up scoring.

"He still hadn't given up a run, but he walked two guys and a hit a guy in that inning, so, he just lost it.

"He still hadn't given up a run, but he walked two guys and a hit a guy in that inning, so, he just lost it. Lost the command he had for the six innings prior." -Matt Williams on Gio Gonzalez's rough seventh vs PHI

"Lost the command he had for the six innings prior. Not bad, but just off the plate, but we load the bases there. The last guy that he hit, tried to come in and just went too far. Other than that inning, he threw the ball really well."

Williams turned to lefty Xavier Cedeno with the bases loaded and one out, against switch hitter Cesar Hernandez, only to have Hernandez line a first-pitch fastball to right, driving in two runs. Cedeno hit Ben Revere in the next at bat and Freddy Galvis hit a first-pitch fastball from new pitcher Craig Stammen to right to drive in run no.3 before Chase Utley's sac fly made it four, and 4-1 Philadelphia.

Williams was asked if he planned on going to the bullpen either way even before Gonzalez hit Blanco?

"We had the lefty and the righty going," the second-year skipper said. "Unless we have to -- he still hadn't given up a run -- so unless we have to get him out of there we want to let him try to finish that, but didn't work out that way."

As for the decision to go with Cedeno first over Stammen, or maybe left-hander Matt Thornton? 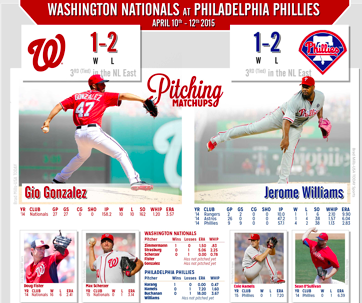 "We've got both of them going," Williams said, referring to Cedeno and Stammen.

"The pinch hitter is a younger player, he's got good speed, we need to get a grounder there, but he's a better left-handed hitter than a right-handed hitter, and we've got two other lefties that are proven on the bench over there, so we wanted to get that guy and then deal with the next guy that comes up there in Revere. Turned out that the pinch hitter got a hit and then [Cedeno] hit Revere and then we had to go to Stammen."

One reporter wondered if this was another example of how the changes in the bullpen over the winter left questions about who fit what roles, whereas last season he would have known who he'd turn to in the seventh-eighth-and-ninth?

"Even last year, going into the seventh, Gio would have started the seventh anyway," Williams said. "Didn't work out for him tonight, but all in all he pitched really well. Ran into some trouble in the last inning though."