Phillies 3-2 over Nationals: A frustrating, but not heartbreaking loss in CBP

The Washington Nationals took a 2-0 lead into the eighth inning, but lost the lead and eventually the game to the Philadelphia Phillies in extra innings. Matt Williams talked after the game about what went wrong in Citizens Bank Park.

Share All sharing options for: Phillies 3-2 over Nationals: A frustrating, but not heartbreaking loss in CBP

Just five games in, a somehow-familiar scenario played out for the Washington Nationals last night in Citizens Bank Park. A few pitches left up hurt because the Nats struggled to score runs. A defensive miscue led to a blown lead. A solid start wasn't enough. A relief pitcher struggled in a new role.

The Nationals took a 2-0 lead into the bottom of the eighth with another solid outing by a starter, Doug Fister this time, only to have Blake Treinen give up runs on an opposite field double by Ryan Howard and a single up the middle by catcher Carlos Ruiz that slipped through the defense when middle infielders Danny Espinosa and Ian Desmond converged behind second base and had it skipper through, off Espinosa's glove, and into center, allowing pinch runner Cesar Hernandez to score the tying run.

"Well, it's the fifth game of the season, so I don't know if it can be heartbreaking, but we had them..." -Matt Williams after last night's 3-2 loss to Phillies

In the top of the eighth, the Nats added to what was a 1-0 lead on an RBI single by Clint Robinson, but stranded two runners after putting two on with no one out, making the Phillies' rally in the bottom of the inning that much more frustrating.

By the time Philadelphia scored the winning run in the tenth, it almost seemed inevitable. It was a tough loss, but second-year skipper Matt Williams told a reporter who asked if it was a "heartbreaker" that it wasn't the word he would use.

"Well, it's the fifth game of the season," Williams said, "so I don't know if it can be heartbreaking, but we had them, we had them where we wanted them. They got a couple of base hits with guys in scoring position and we got to extra innings, so, we'll be ready to play tomorrow. Have to put this one behind us quickly, it's a short night and get back ready to go tomorrow."

Asked what needs to improve for the 1-4 Nationals to avoid repeating the pattern that's emerged (if one can after five games) early this season, Williams declined to offer suggestions.

Blake Treinen was on the mound, in the second of back-to-back outings, and his third in four days, when the Phillies tied it up in the eighth. Chase Utley singled to center with one down, then scored when Howard missed tying it up by just a few feet on a fly to left, settling for an RBI double. Howard's pinch runner scored on the defensive miscue by Desmond and Espinosa.

Strong as he's looked all Spring and early this season, Treinen left a few up against the left-handed Phillies, and blew the lead Doug Fister had protected through 6 ⅓ scoreless.

"Ball was elevated just a touch," Williams said when asked about Treinen's outing. "But fastball was good, throwing strikes, throwing his sliders for strikes, good. It didn't work for him tonight, but I like what I see from him." 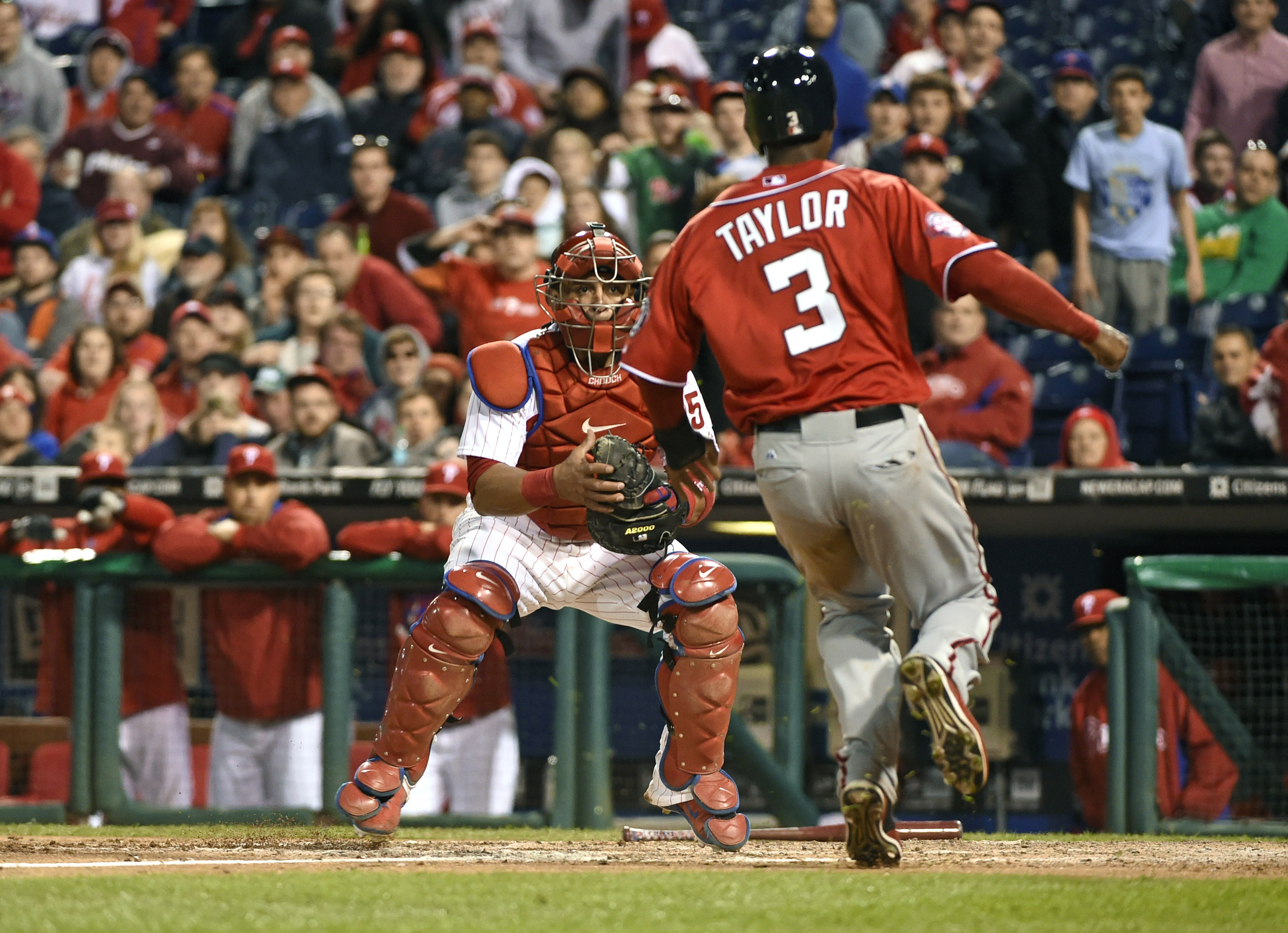 Before the Phillies won it in the tenth, the Nats had a runner thrown out at home... by Ben Revere. Michael Taylor walked with one down, stole second, then tried to score on a hard-hit liner to left by Yunel Escobar. Revere, to the surprise of even the Philly announcers, made a strong throw in, but a moment's hesitation at second by Taylor didn't help.

"It looked as if he hesitated a little bit," Williams allowed, "but we're aggressive.

"We want to be aggressive in that situation. One run potentially wins the game for us. Good piece of hitting by Yunel. We had our chances. We had a lot of chances tonight."

The Nationals dropped two of three to the New York Mets to open the season this past week, now they will try to salvage one of three with the Phillies in Citizens Bank Park.

• We talked about the loss after last night's game on Nats Nightly: