Washington Nationals' skipper Matt Williams talked after Sunday's game about asking Bryce Harper to bunt, Yunel Escobar refusing to K and what Clint Robinson has done to earn more starts. The Nats are in Boston today after dropping two of three in Philly.

Share All sharing options for: Nationals salvage series finale in Philadelphia, head to Fenway for three with Red Sox

It was starting to look like the Nationals were going to let another one slip away. Washington's struggled to score runs early this season, struggled to drive them in, struggled to hold leads. The Nats were up 2-0 after four, but by the seventh, it was tied up again and the one-run lead Max Scherzer left the game with was gone. Lefty Xavier Cedeno surrendered a home run by Darin Ruf in the first at bat of the bottom of the seventh, which tied things up at 2-2, and two innings later, for the second day in a row, the Nationals and Phillies once again needed extra frames to decide things.

Yunel Escobar led off the top of the tenth with his second double of the year, sending a low liner through the right side. Bryce Harper stepped in next... against Phillies' lefty Jake Diekman... and squared around to bunt...?

"I asked him to get the ball down for the first two and once that didn't happen allowed him to go ahead and swing it and he ended up getting the job done..." -Matt Williams on asking Bryce Harper to bunt in the 10th on Sunday

Harper wasn't able to get a bunt down, in two attempts, but he did manage to send a sharp grounder to the right side, moving Escobar to third with one down. Philly right-hander Justin De Fratus took over on the mound and promptly threw one in the dirt, bouncing a bender that got by catcher Cameron Rupp, allowing Escobar to cruise in from third for a 3-2 lead.

Clint Robinson followed one out later with the second double of the inning, and the 30-year-old surprise member of the Nationals' roster scored when Wilson Ramos came through with an RBI line drive to left. 4-2 Nationals.

The Phillies rallied for a run in the bottom of the tenth, but the Nats and closer Drew Storen (with an assist from Ryan Zimmerman at first) held on for a sweep-avoiding win.

But about Bryce Harper squaring to bunt? Was that his idea?

"We called the bunt for the first two and then the last one to swing away," Nats' skipper Matt Williams explained after the game. " It's a tough lefty matchup [with Diekman]. The guy is really difficult on left-handers. And so I asked him to get the ball down for the first two and once that didn't happen allowed him to go ahead and swing it and he ended up getting the job done anyway."

"He's got a good knowledge of the strike zone, doesn't get outside of it, and that's what we saw all Spring from him." -Matt Williams on Clint Robinson

Escobar's tenth inning double was his second hit of the game. He went 2 for 4 with a walk and a run scored and he managed to avoid striking out for the ninth straight game (going back to last season) and 35th straight plate appearance.

"Knock wood on that one," Williams joked when asked about the infielder not striking out yet this season. "It's going to happen eventually I imagine.

"He just makes contact, he's got a good knowledge of the strike zone, draws walks, sets up our offense a little bit with the top three guys out. So he's a good guy to have at the top of our order because he's on base a lot."

As for Clint Robinson, who went 3 for 5 and scored what ended up being the winning run, Williams said he's continued to do what he did throughout Spring Training to earn a spot on the roster.

"The same as Spring," Williams said. "He's got good knowledge of the strike zone. He doesn't get outside himself. Got a couple of base hits today that weren't necessarily clean off his bat, but he got himself in a good hitter's count the last time up and drove one off the wall. So he's got a good knowledge of the strike zone, doesn't get outside of it, and that's what we saw all Spring from him." 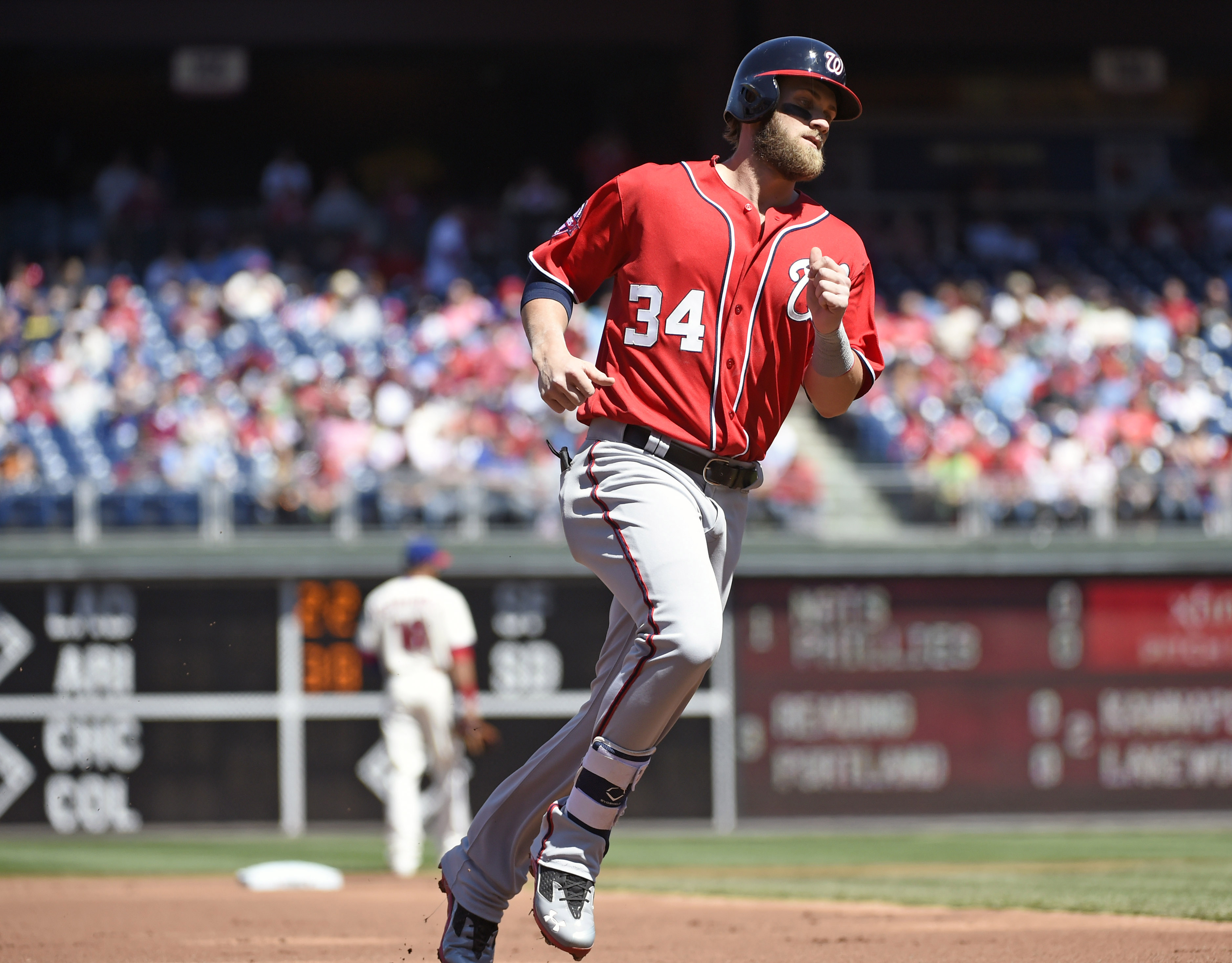 A reporter asked if Robinson has earned more time in the lineup with his work so far this season (4 for 10, double)?

"Sure," Williams responded. "That's why he was in there today. He's in there today because he has knowledge of the pitcher. He's faced him before. And he's earned his way here. We want to keep him as fresh as we possibly can with those at bats and he can play both outfield positions. He plays first base. So there [are] a lot of options for him. Depending on our main guys getting a day off."

Jayson Werth is in left field today, where Robinson started on Sunday, but since they're playing under AL rules in Boston's Fenway Park, Robinson's penciled in as the DH for the series opener with the Red Sox.

We talked about Sunday's game on Nats Nightly after the Nationals' win: