Ian Desmond committed his sixth error in eight games on Tuesday night, but was 3 for 4 at the plate and he played a clean game defensively on Wednesday while also hitting his first home run. Can he put the early-season issues behind him?

Share All sharing options for: Can Nationals' shortstop Ian Desmond put early struggles, errors behind him?

Ian Desmond committed his sixth error in eight games on Tuesday night in Boston, on a grounder to short off Red Sox' outfielder Hanley Ramirez's bat. Washington led 7-5 at that point. Matt Thornton, who was on the mound for the error and Blake Treinen, who took over on the mound with one out, each hit batters and loaded the bases, and the Red Sox rallied to tie it when Treinen committed two errors on a weak grounder back to the mound, bobbling the ball and then throwing it away, allowing two runs to score.

With the score tied at 7-7, and runners on second and third following Treinen's misplay, Red Sox' shortstop Brock Holt hit a grounder to short. Desmond charged and fielded the ball, but after looking towards home and pumping once, he turned and threw to first to get the second out of the inning. The Sox' third run of the frame scored, and Boston took the lead without a hit.

"Regardless of what happens the day before he's got a very short memory, good or bad. And it's about today." - Matt Williams on Ian Desmond

Matt Williams was asked after the game, an 8-7 loss, if he thought there was a play at the plate on Holt's grounder to short and if that was where he wanted the throw to go?

"That's where we're playing them there," Williams said.

"We've got to try to get that play at the plate. Now, if the ball bounces funny, if he bobbles it, if he doesn't have a clean grip, then we want to get an out for sure. But we want to get that guy at the plate. There could have been a shot. It was a good break by the runner, he's going on contact. There was a shot. But again, I haven't talked to [Desmond] about it. If he doesn't have a grip on it, we want to make sure we get an out."

Desmond agreed that there was a shot at a play at the plate when he spoke to reporters after the loss.

"Looking back at the replay on the jumbotron, yeah," he said. "But at the time, no. I don't know."

"Just a high chopper. I don't know. I just missed it," Desmond said.

"He's a unique player. He's dynamic in a lot of areas of the game. And so with one swing of the bat, that can turn." -Matt Williams on Ian Desmond's early struggles at the plate

The 29-year-old infielder was clearly frustrated, and as he explained it, the most frustrating part was that he was working hard and not seeing results.

"I'm doing it every day," he said. "That's the thing. It sucks. I don't know what to do. I'm doing everything I can. Sitting here answering questions after every game is brutal. But what am I going to do."

The good news for Desmond on Tuesday, was that he seemed to get his timing down at the plate after going 1 for 16 in the first four games of the Nationals' six-game road trip. In the next-to-last game in Fenway Park, Desmond went 3 for 4 with a double off the Green Monster and two singles.

Though he went just 1 for 4 in the series finale on Wednesday, he avoided making any errors and connected for his first home run of the season, taking a breaking ball down and in from left-hander Wade Miley for a ride, clearing the Monster and bouncing one off the AAA Insurance sign high above the wall some 380 ft from home plate.

Williams talked after the Nationals' sweep-avoiding 10-5 win about his shortstop's ability to put the mistakes and the tough games behind him and focus on the task at hand.

"He does it every day," Williams said. "Regardless of what happens the day before he's got a very short memory, good or bad. And it's about today. It's nice to see him have some success and get some plays and make some plays and get hits. So I think his swing is coming and I think he's getting more and more comfortable in the field as well." 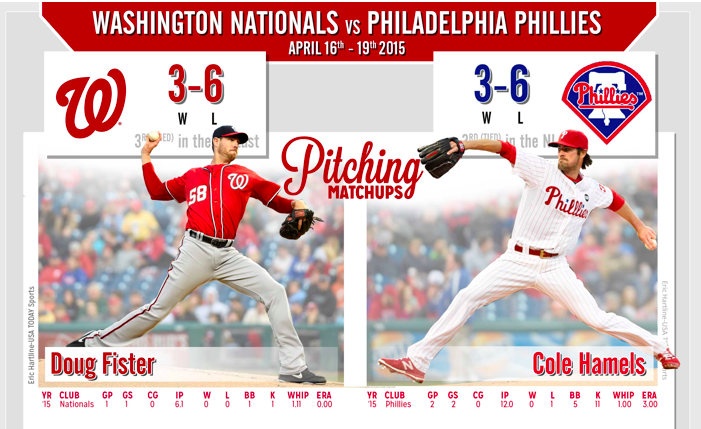 "You have opportunity every day," the one-time major leaguer-turned manager continued. "You have opportunity to do something special. And he's a unique player. He's dynamic in a lot of areas of the game. And so with one swing of the bat, that can turn. One diving play, that can turn. We've also seen him go 60 games without making an error as well. Again, it's a very short memory for him, and he'll be ready to turn this one off and go again tomorrow."

Good or bad, as Williams put it, each day, each play is an opportunity to turn things around.

Back home in the nation's capital tonight, Desmond's batting second and he'll face Phillies' lefty Cole Hamels, against whom he's 11 for 53 in their respective careers, with five doubles, a triple, a home run, a walk and 11 Ks.