Washington Nationals' GM Mike Rizzo talked about the latest news on Anthony Rendon, the ideal infield with Rendon out and more with 106.7 the FAN in D.C.'s Grant Paulsen and Danny Rouhier this afternoon. He talked about Dan Uggla too...

In an article on the third opinion Anthony Rendon received on his ailing left knee on Tuesday, of an MCL sprain he suffered in a March 9th game in Grapefruit League action, CBSSports.com's Jon Heyman wrote Wednesday that "people familiar with the situation" told him the 24-year-old Nationals' third baseman, "could be back in about three weeks."

Washington's GM Mike Rizzo told Heyman the one positive to be taken from the latest diagnosis was that it was the same as the first two.

"'All three (doctors) agreed,'" Rizzo said. "'There's nothing seriously wrong, and it should remedy itself. Some turn the corner quickly and with other guys it takes a few weeks. But he will be fine."

In an interview with 106.7 the FAN in D.C.'s Grant Paulsen and Danny Rouhier on Wednesday afternoon, Rizzo was asked about the current level of concern over Rendon's knee?

"We've got the two most renowned knee experts involved in it right now," he said. "We have our own team physician, Dr. [Wiemi] Douoghui, Dr. [James] Andrews and Dr. [Steve] Singleton out in Vail, Colorado, they all had the same diagnosis and it was good news for Anthony and the Nationals that there is no structural damage.

"Everyone is in agreement on where he's at and what's wrong with him.

"Yesterday on a long conference call that we had with all the parties available we're putting together a plan and hopefully that good news that will translate into [Anthony] turning the corner and beginning his baseball activity soon."

But Rendon is a few weeks away, at least, and Opening Day is on Monday, so the Nationals will run some combination of Dan Uggla, Danny Espinosa and Yunel Escobar out there at third and second along with Ian Desmond at short and third-turned-first baseman Ryan Zimmerman moving across the infield full-time.

"We've got what we believe [are] three shortstops who are capable of playing anywhere on the infield." - Mike Rizzo on Nationals' infield options on 106.7 the FAN

"I think we have flexibility there," Rizzo told 106.7 the FAN's hosts. "We've got what we believe [are] three shortstops who are capable of playing anywhere on the infield. [Ian Desmond] is our shortstop, he's implanted there. You have [Yunel] Escobar who is a great defensive shortstop, has shown that he can go over and play second base seamlessly. Has shown now that he can go over and play third base smoothly, seamlessly.

"[Danny Espinosa] is the same way. He's a shortstop by trade, he's a great defensive second baseman. He went over to third for the first time this year and played it well. He'll only improve as he gets reps over there."

"So we feel that's a good outcome for us but we have great flexibility to move players all over the place where you could have Uggla playing second base for a day or two and Espi at third or Escobar at third."

The surprise of the bunch, is Uggla of course, who was released by two teams last season with the Atlanta Braves parting ways with the struggling infielder with over $18M left on the 5-year/$62M extension he signed in 2011.

Over the last four seasons, while he struggled with oculomotor dysfunction and symptoms related to previously undiagnosed concussions suffered on separate pitches that hit him in the head in 2012 and 2013, Uggla put up a combined .208/.316/.388 line with 64 doubles and 79 HRs in 503 games and 1,996 plate appearances.

Some Predictions about the 2015 Washington Nationals 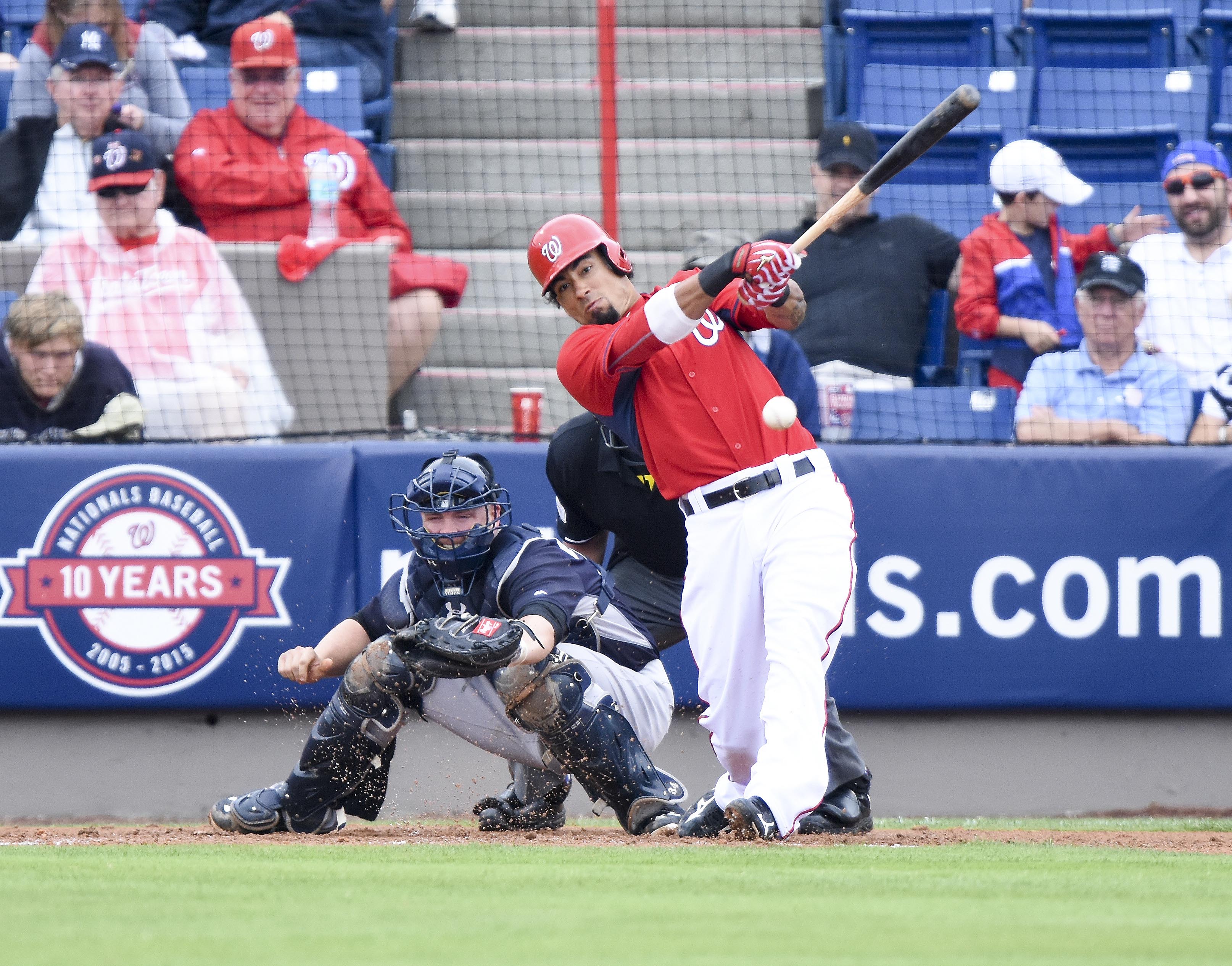 "He looks more like his old self," Rizzo said, "back a couple of years before he had some of the vision problems that he had. He's got great strength. He's got great power. He's in terrific physical condition. He's seeing the ball much better. The combination, I think, of doing the offseason vision and concussion stuff in Vegas all offseason has really gotten him physically fit to hit again. His hand-eye coordination, his vision has improved and it's back to normal. He says he feels as normal as he has in the last two or three years and also, I had a long relationship with him but also our hitting coach Rick Schu has had a long relationship with him. They go back to the days [in Arizona] when Dan was a minor league player for us and Rick was in our minor league system, so he knows Danny from the start of things and they really broke down his approach at the plate and his swing mechanically when Dan arrived here. He's got a comfort level with Schu. And he's worked really hard to get where he's at."

"He's had a great Spring and hopefully it translates into the regular season."