It's been a busy day getting ready for the series finale with the St. Louis Cardinals, but we collected some quotes from this morning's pregame press conference with Washington Nationals' skipper Matt Williams to catch you up on the latest news...

We've been running around all morning and all afternoon getting ready for the 4:05 PM EDT finale of the three-game set with the St. Louis Cardinals, but we were in Nationals Park for the pregame press conference with Washington's skipper Matt Williams today. Here are some random quotes and updates from the Nats' manager...

Anthony Rendon was in the nation's capital this morning, and he's headed out for Harrisburg to start a rehab stint with the Nationals' Double-A affiliate. Here's what Williams had to say about the latest on the plans for the 24-year-old Nats' infielder who's working his way back from an MCL sprain suffered in Spring Training after he saw Rendon in person for the first time in a long time this morning:

"He's ready to go on the rehab assignment. So the plan for tomorrow is Harrisburg and get him going. He's got to get in baseball shape..." -Matt Williams on Anthony Rendon's rehab plan

Williams on Rendon: "Looks good. More importantly he feels good. So, no issues. He did his pregame hitting routine today in the cage. We took grounders. He'll go back our for full batting practice today. So he's ready to go on the rehab assignment. So the plan for tomorrow is Harrisburg and get him going. He's got to get in baseball shape, but the fact that he feels good is an important step for him."

So he'll play seven innings on Friday?: "At least five. So depending on at bats, depending on stress level, running the bases, all those things. At least five tomorrow and then he'll go the next day, per plan, and have another day off, another good work day and then progress from there. So we look at at least five [innings] and then seven; off day; start at seven again and go to nine."

Jayson Werth is out of the Nationals' lineup today, but there is no injury or anything else to worry about. As Williams explained, he just needs the occasional break since he didn't get a full Spring Training in:

Werth off today?: "He's going to have to have an occasional day. He didn't have Spring Training, if you will, so he goes through that regular Spring Training-type soreness, and it's even a little more monumental, because it's been condensed."

Williams was also asked about the Nationals' bullpen roles now that Craig Stammen is out for the season (most likely). Does it potentially mean more high-leverage innings for Tanner Roark going forward?

Williams: "Sure. Yeah it does. You saw it a little bit the other night. More of a one-inning stint type situation. He was available last night too, but we want to make sure we can ease him into that if we can because he's been a starter, because he's been a longer guy, the resiliency is key. So, depends on pitch count and the number of pitches the day before. But he said he felt pretty good yesterday, so with that day off he's certainly available to do that today too."

A reporter wondered if all the new arms (Felipe Rivero, now on the DL; Rafael Martin, now Matt Grace and also Aaron Barrett and Blake Treinen, who have been around but are still at the start of their MLB careers) make it harder to manage the bullpen right now as he works the new pitchers in and gets everyone work?

Wiliams: "It's not difficult. It's not that it's going to work every time either. We want to make sure that everybody pitches. Make sure that we keep them as fresh as possible. Your longer guys, of course, sometimes have days between, depending on how many pitches they've thrown and all of that.

Nats' Doug Fister tried to walk the line vs Cards 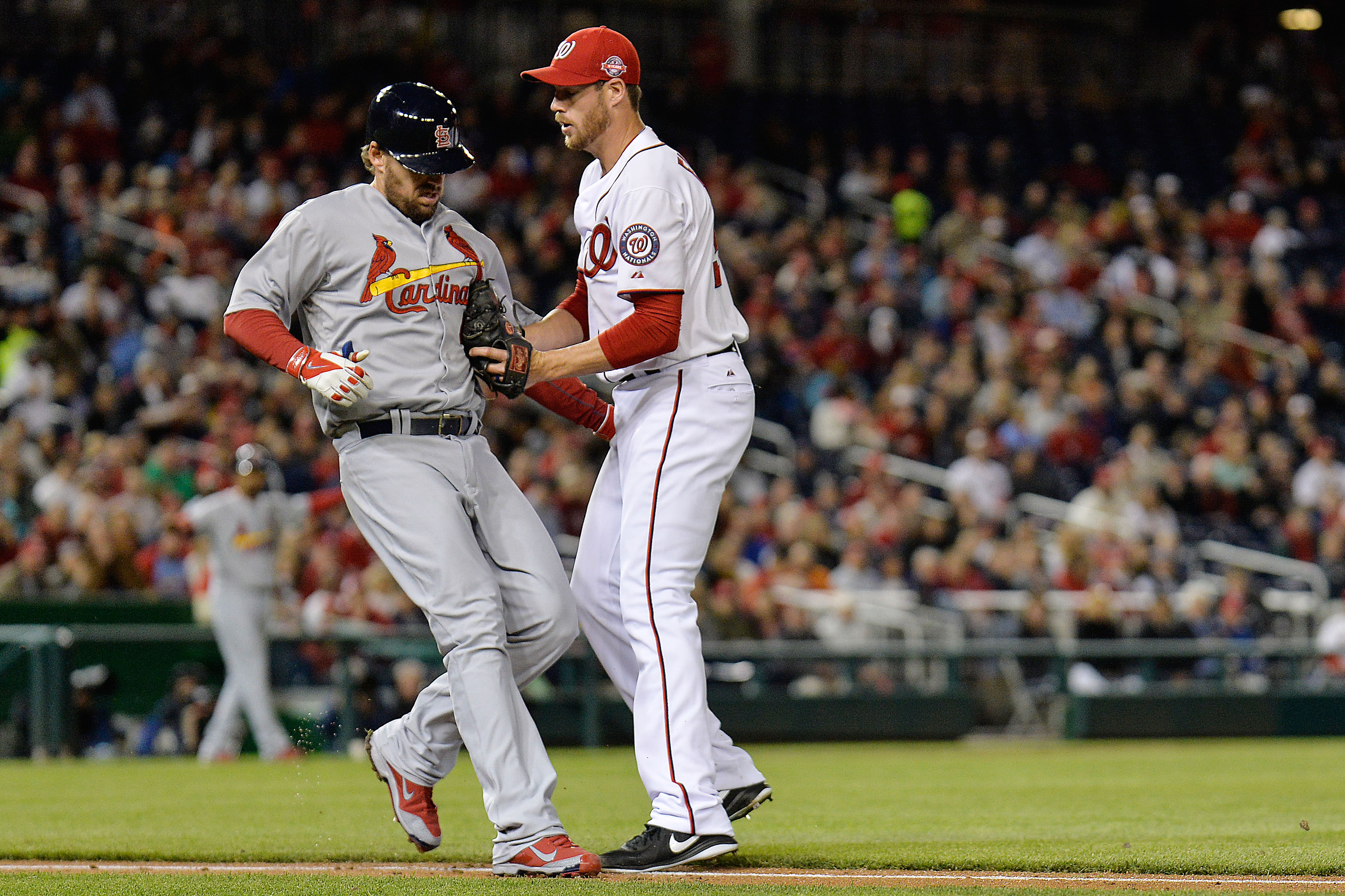 "But against the Cardinals, they've got a lot of lefties, so our lefties get work. In our next series, they don't have as many lefties. They're more right-handed dominant in Miami, so that sometimes dictates who gets the work in a certain series. But we manage it the best we can. Get guys in there and make sure that we can provide them opportunity.

"Barrett has been good. Blake has had a couple of hiccups. One was more fielding than anything. Last night he left the ball out, over. It happens. But he's throwing the ball well. He threw great sliders last night. I like his progression, where he's going. Our lefties have been good. So, I think we're okay."

OK, that's all for now, enjoy the series finale. It's Max Scherzer vs Michael Wacha, it will be hard not to enjoy that...