As Washington Nationals' skipper Matt Williams says often, it's all about creating opportunities and trusting that the Nats' talented roster will eventually take advantage of them. The Nationals went 2 for 18 with runners in scoring position in the last two losses.

In Thursday's loss to the St. Louis Cardinals, Washington's hitter had plenty of opportunities, but went 1 for 11 with runner in scoring position in what ended up a 4-1 loss. It was a 2-1 game until the top of the eighth inning, however. After they ended up leaving seven runners on base overall, Nationals' manager Matt Williams was asked about the missed opportunities.

The Nationals had two on with one out in the first, but Ryan Zimmerman sent a fly to right and Clint Robinson lined out to center to leave them on. In the third, Zimmerman singled and Robinson walked to put two on with no one out, but Yunel Escobar was first-pitch swinging and grounded into a double play and Jose Lobaton K'd swinging with Zimmerman on third.

"We can look back to yesterday too, we had 11 [opportunities]. So, that's a lot of opportunities. But again, the game will give you something different every day." -Matt Williams talks creating opportunities in last two losses

Danny Espinosa doubled off Cards' starter Michael Wacha in the fifth, and Max Scherzer reached on an error, then Denard Span came through with an RBI single which drove in what ended up being the Nats' only run, but with men on first and third and no one out, Ian Desmond popped up on a 1-0 pitch, Bryce Harper K'd swinging and Zimmerman grounded out to end the threat.

With the score 4-1, Desmond doubled to start the eighth, Harper walked to put two on, but Zimmerman grounded into a double play first-pitch swinging against Cardinals' reliever Jordan Walden, and Robinson lined out.

"You had first and second, nobody out twice," a reporter asked Williams after the game, rehashing the opportunities the Nats had.

"Some first-pitch double plays on what must have been pitcher's pitches, they jammed themselves, first and third nobody out, pop-up, chased strikeout?"

"Gotta do better," Williams said. "A little over-aggressive. [Desmond] got in a good count, got ahead in the count and swung at a changeup, popped it up. [Harper] ran it to full and swung at, I think, one out of the zone, and then of course the double play balls. Balls that are not -- not the ones we want to hit. You're right in saying more pitcher's pitches than anything."

In last night's 3-2 loss to the Marlins in Miami, the Nationals were 1 for 7 with runners in scoring position and six left on base in a one-run game that was decided in the bottom of the eighth, after the Nationals failed to take advantage of a two on, one out opportunity in the seventh with Dan Uggla striking out and Reed Johnson grounding out to end the threat, and a two on, two out opp in the eighth, when Zimmerman grounded into a force at second on an 0-1 pitch from reliever Bryan Morris.

Marlins' shortstop Adeiny Hechavarria doubled off Tanner Roark to start the Marlins' half of the eighth inning, and after a failed sac bunt attempt by Donovan Solano, Dee Gordon reached on a swinging bunt to second off lefty Matt Grace on which Nats' second baseman Dan Uggla didn't even have time to make a throw to first.

"We're playing great... It's just later innings, and we can't get a guy in, they get a guy in and they win the ballgame." -Bryce Harper on the Nats' 3-2 loss in Miami

With runners on the corners and one out, Martin Prado hit an opposite field line drive on a knee-high fastball outside from Aaron Barrett and the Marlins took a 3-2 lead, which held up.

"That's speed," Williams said. "Dee's got great speed. And then of course they're going to run, so he had a good jump and didn't throw the baseball and then Martin Prado is a good hitter. He took advantage of a pitch down and away and singled. That's the game."

Asked about the Nationals' approach at the plate in the eighth, when Zimmerman grounded out with two on and two out, Williams broke down the missed opportunity.

Williams pulled starter Jordan Zimmermann after six innings to take a shot with two on and one out against Marlins' reliever A.J. Ramos, who came on for Mat Latos after Yunel Escobar and Wilson Ramos singled with one down, but Uggla K'd swinging and Johnson grounded out.

Williams was asked if lifting Zimmermann, after just 79 pitches in six innings in a 2-2 game, was about the fact that he had to try to take advantage of an opportunity since the lineup has struggled to drive runners in and if, in a different situation, he would have handled that decision differently?

"If we've got the lead, it's different," Williams said. "If we score before he gets up, he's bunting. So it depends on the game. We've got a couple outs there, we've got to try to take advantage it with a guy [Johnson] that knows these guys very well. Didn't happen, but those are the chances sometimes you have to take. We don't want to just send [Zimmermann] out there because he's pitching well. We, first and foremost, want to win the game, so it's important for us to take a chance there."

Did Williams look to take a shot at the run there, knowing they weren't producing too many opportunities?

"We can look back to yesterday too," he said, "we had 11 [opportunities]. So, that's a lot of opportunities. But again, the game will give you something different every day. In that situation, we know their bullpen and how they can match up against us depending on where we're at and we've got to try to score that run." 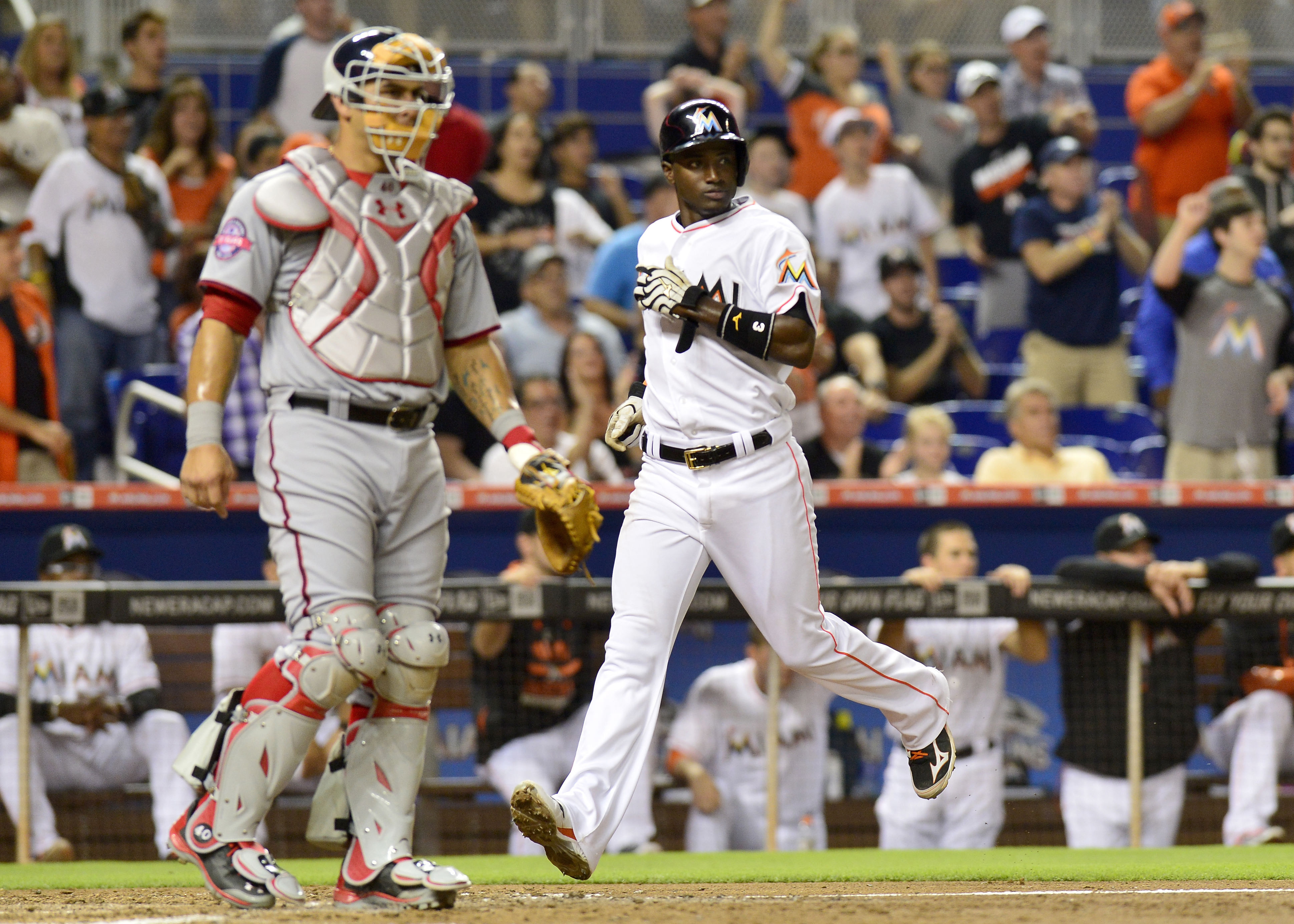 The Nationals failed to take advantage of opportunities in the seventh and eighth and then the Marlins, frustratingly, came right back with the go-ahead run in the bottom of the eighth inning.

"We're playing great," Bryce Harper said, after going 2 for 2 with a walk and two RBIs. "It's just later innings, and we can't get a guy in, they get a guy in and they win the ballgame. Like I said, if we just keep plugging along, keep doing what we need to do, our pitching is going to hold it, so we were talking at the beginning of the year, if we score four runs, four or more runs in every single game then we'll win ballgames."

As NatsInsider.com's Mark Zuckerman noted on Twitter last night, Harper's right. So far this season, the Nationals are averaging 3.71 runs per game through 17 games and allowing 3.94.