Over the last ten games, Ryan Zimmerman has shown signs he's getting his timing straight at the plate and the Washington Nationals' first baseman is starting to produce offensively. Matt Williams said he's seen the signs...

Share All sharing options for: Nationals' Ryan Zimmerman trusts he'll end up where he's supposed to be

Ryan Zimmerman went ninety-four at bats between home runs before Saturday afternoon's three-run line drive to left field in Nationals Park off Atlanta Braves' right-hander Julio Teheran. Zimmerman's third home run of the season was his first since April 13th in Fenway Park. He would have been the offensive hero for the Washington Nationals, if the Nats hadn't blown the 6-1 lead his fifth inning blast gave them.

Instead of the 30-year-old Zimmerman, who has hit nine walk-off home runs in his ten major league seasons, and hit three before he turned 23, it was currently 22-year-old slugger Bryce Harper who hit the walk-off homer for the 8-6 win over the Nats' NL East rivals.

"The timing is starting to come, he's using the whole field, he's catching breaking balls out front like he did the other night and hit a homer..." -Matt Williams on Ryan Zimmerman

Zimmerman followed up his 1 for 4 game on Saturday by going 2 for 4 on Sunday, driving in the game-tying run with an eighth-inning single that made it 4-4 before scoring when Wilson Ramos put the Nationals ahead with an opposite field RBI double.

Though he has a .232/.285/.392 line on the season after 32 games, Zimmerman is 11 for 37 over the last ten with hits in 11 of the last 13 games, and Nationals' skipper Matt Williams said after the win in the series finale with the Braves in D.C. that he sees signs the first baseman is turning things around at the plate.

"His timing is getting there," Williams said.

"We talked about it before, you miss most of last year and it's not like it's riding a bike, you just don't pick it up again.

"So the timing is starting to come, he's using the whole field, he's catching breaking balls out front like he did the other night and hit a homer, and staying through the ball and driving runs in for us. He's going to get opportunities. There [are] lots of opportunities for him to do that and he's a proven guy in that regard, so I'm glad for him that it's starting to come for him, he's starting to have better timing and feeling better about it."

Zimmerman, who played just 61 games last season, with a fractured left thumb and Grade 3 hamstring strain leading to two lengthy DL stints, said he's confident that if he keeps doing what he's done throughout his career things will work themselves out.

"I've just got to keep doing what I've been doing and keep with my routine that I've done for my whole career and trust that..." -Ryan Zimmerman on trusting he'll turn things around offensively

"It's kind of funny," he told reporters, "because my average, obviously, isn't what I want it to be, but I feel good at the plate. Usually when you're having success, and the numbers look like what they look like, you're struggling, you feel lost, but honestly, all season I've felt great.

"Anyone hitting .200-something probably says they line out and make excuses, but I've just got to keep doing what I've been doing and keep with my routine that I've done for my whole career and trust that like it has in the past it will get back to where it's supposed to be."

When things are going right for Zimmerman, Williams said, "the ball goes low to the right side and it elevates to his pull side, so he has a knack for bouncing that ball through the middle like he did today and if the ball hangs in the strike zone a little bit, the bat head follows it and he's able to elevate to his pull side.

"That's what you guys have seen of him for years and in my brief time with him that's what I've noticed. That he stays on top of the ball to his opposite side and he's able to hit singles there, drive a ball to right center, take a base hit when we need it, with guys out there in scoring position and then catch a ball out front and drive it to his pull side too."

Zimmerman said he doesn't plan on making any big adjustments to get things going.

"Just staying with the same plan that I always stay with," he said.

Frank Robinson on the Washington Nationals 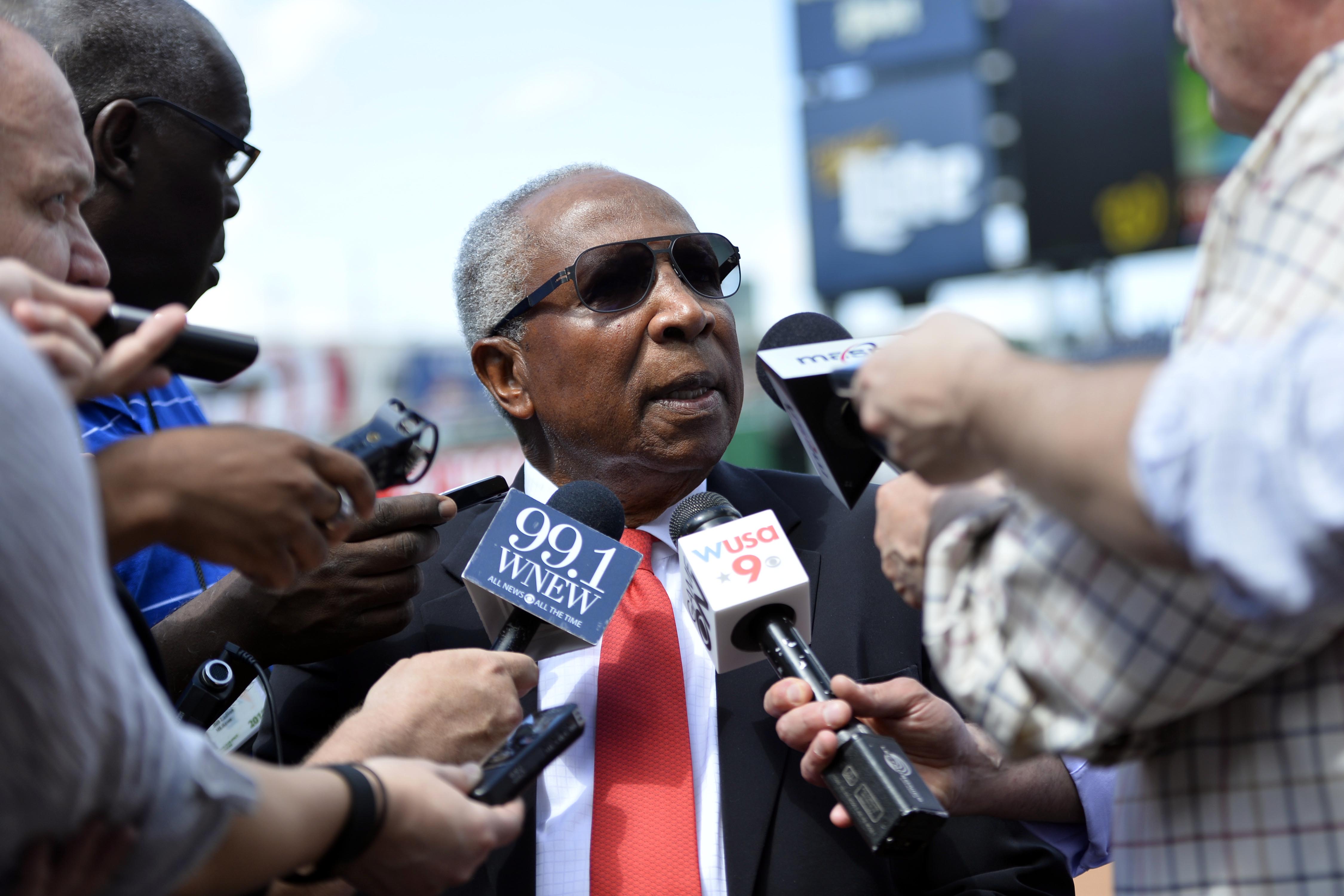 "I think I've found in the past when you panic and try to change things it only adds another week or two to the struggle. I've done the same thing for ten years now and by the end of the year it's always worked, so I just kind of trust that and stick with it and keep grinding it out."

When Frank Robinson was in Nationals Park this weekend, to have his contributions to baseball in the nation's capital honored, he talked about what he saw from the Nats' '05 1st Round pick when he managed Zimmerman in 2005-2006.

"I had seen the reports and heard things on him and it was nothing but good reports," Robinson recalled.

"It was about defense, not offense. I saw him at third and I knew he was going to be a very special player for a lot of years. People wanted to rush him to become a home run hitter and I said 'Leave him alone. Let him hit that ball to right field in the gaps and left center field in the gaps. In time as he learns the league, and he learns the pitchers in the league, he'll start to pull the ball...'"

Let Zim be Zim. He'll get to where he's supposed to be.

• We talked about the Nationals' sweep of the Braves, Frank Robinson's visit to Nationals Park and more on Nats Nightly yesterday: