Washington Nationals' skipper Matt Williams and pitching coach Steve McCatty talked after Tuesday night's start about what went wrong for Stephen Strasburg. The right-hander is frustrated and not sure exactly what's going wrong.

He was also left with even more questions than there were after he exited his previous outing after just three innings with what he eventually said was mechanical issue tied to a back problem which developed because he was compensating for an ankle injury suffered during Spring Training.

"Just not making good pitches. Trying to figure that out. It wouldn’t happen if I knew what it was..." -Stephen Strasburg on struggles in Arizona

As Washington Post reporter James Wagner wrote last night, when asked if he could pinpoint exactly what has gone wrong early this season, Strasburg was at a loss.

"Just not making good pitches. Trying to figure that out. It wouldn’t happen if I knew what it was,'" Strasburg told reporters.

Nats' skipper Matt Williams said the problem last night vs the D-Backs was fairly simple, even if the cause is still a mystery. Strasburg was up in the zone all night.

"Up, the ball to [Mark]Trumbo is up," Williams said of the second of the two home runs Strasburg allowed. "[Ender] Inciarte's home run was up. He wasn't pinpointing down in the zone to either side of the plate, so... it happens. We'll just get him ready for his next one."

Strasburg worked hard between starts to make sure he was ready to take the mound again and straighten out whatever mechanical issues were causing him trouble both physically and in terms of the results he was getting.

The right-hander was asked after Tuesday's start if the work he did on his mechanics carried over to live action?

"What do you think?" Strasburg asked. "No, it didn't. Left a lot of pitches up. Didn't hit a spot. They're a good hitting team. I've got to do better."

"Embarrassed. I let the team down. It sucks. I’m just trying to go out there and help this team win some games. I didn’t do that tonight. I’ve just got to turn the page..." -Stephen Strasburg on struggles vs the D-Backs on Tuesday

"Certainly not what he wanted," Williams said when asked about the work Strasburg did.

"The fact that he got through it and felt good physically is good. Fastball was good but he didn't locate it and got beat on his offspeed pitches tonight. But physically I think he's good, so that's a positive sign for us."

"Embarrassed," he said. "I let the team down. It sucks. I’m just trying to go out there and help this team win some games. I didn’t do that tonight. I’ve just got to turn the page and get back on it tomorrow."

Williams did, however, say, that he didn't think the issue on Tuesday was a mechanical one.

"No, I don't think so. I think he just made some mistakes and they got him. That being said, it's just one of those days. The fact that he felt good coming out of it is important for us though."

"I just know that he's got great stuff," Williams continued, when asked what, if anything, they could take away from the outing.

"His stuff will show itself in the end. We've got all the confidence in the world in him. It hasn't been his best stretch, but he's a competitor, he goes out there every fifth day, sixth day if we have an off day, and goes at them. So, the concern coming out of the last one was his health, and I think he passed that hurdle, which is good, so now he'll get back in the swing of it."

Strasburg's pitching coach, Steve McCatty, talked to reporters, including NatsInsider.com's Mark Zuckerman, about the right-hander's struggles this season on Wednesday afternoon, and discussed what the right-hander needs to do to get by his problems.

"'You just have to deal with it,'" McCatty said.

"'That’s all. Keep pushing. I’ve always said: The way you learn is through failing. It’s a struggle all the time. You’ve just got to keep grinding, grinding and grinding. He’s too good.'"

As McCatty explained it, Strasburg's struggles become such big news because he's such a talented pitcher.

"'I always say the standards everybody’s thrown for him … when he does have this little spell that he hasn’t had before, it’s like, boom! It’s like a red light goes off. But for a lot of other people, you just say it’s a part of playing. He’s struggling. For him, it’s a little more noticeable because he’s so good...'"

Fangraphs.com's Jeff Sullivan thinks it might specifically be a problem with Strasburg's delivery out of the stretch:

"With the bases empty, Strasburg’s contact rate hasn’t budged much. It’s a little higher than it’s been, but not nearly enough to sound any alarms. We’re talking just a few percentage points. But as soon as someone reaches, Strasburg’s been about the most hittable pitcher in baseball..."

One of Strasburg's former teammates, Tyler Clippard, now a reliever with the A's after a trade this past winter, was asked on Wednesday about the microscope the Nats' '09 no.1 overall pick has pitched under throughout his time in the majors and the reaction from fans and reporters when he does struggle like he has this season.

"Well, it's one of those things where Stras is a big name in that city," Clippard said in an MLB Network Radio interview.

A's Closer Tyler Clippard on Strasburg/Harper: "Stras is a polarizing figure in DC, nature of beast is negative" - https://t.co/LJPnyQ1zbN

"He's a polarizing figure, and he's 'Stephen Strasburg' so when things aren't going well, I think the nature of the beast is for people to be negative about how he's performing and that's just kind of how it goes, I think." 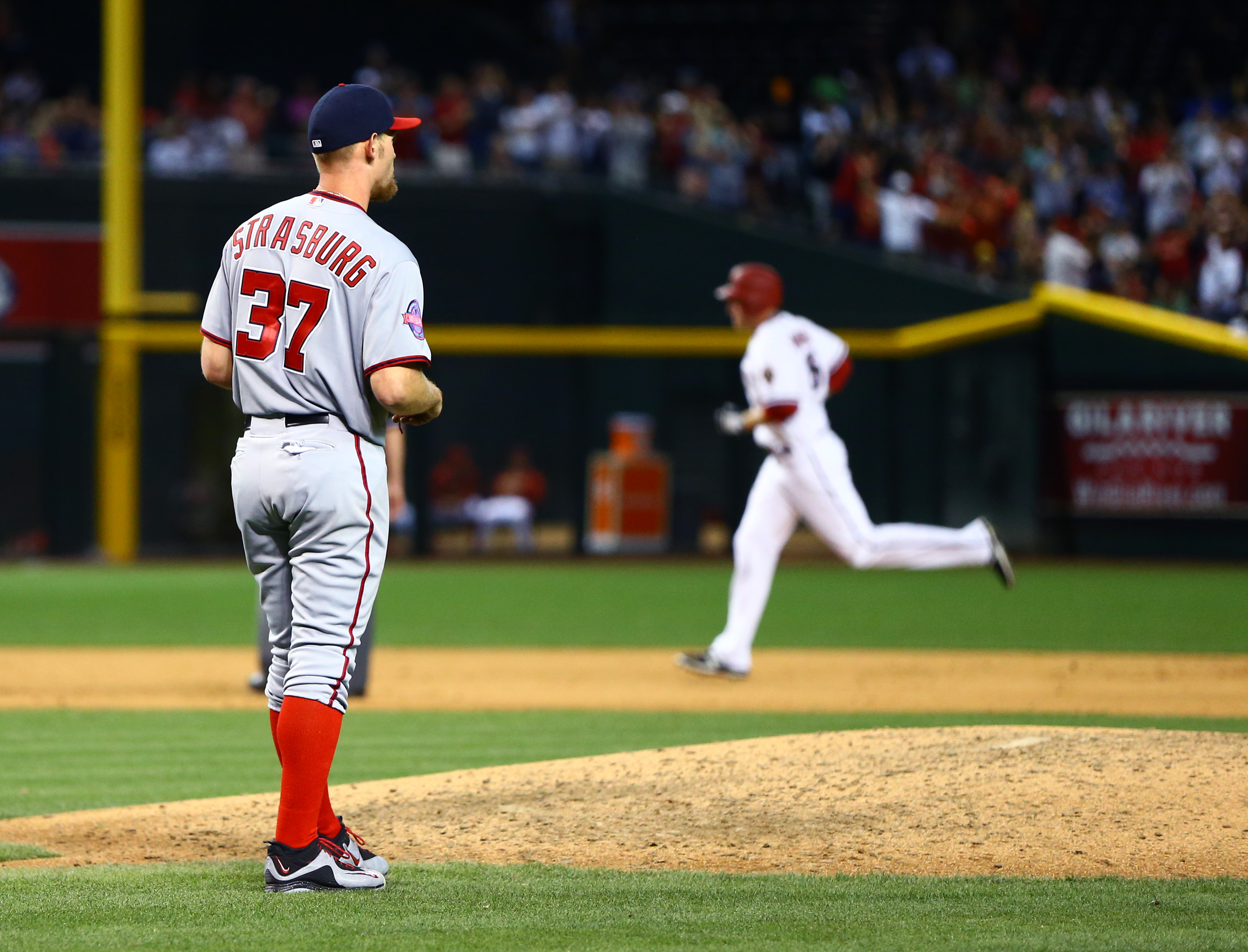 "There's really no reason, specifically because Stephen is such a great guy. You listen to him talk and in interviews, I don't really know how he's perceived, but I know what type of guy he is off the field, and he's such a good dude, family guy, works his butt off. Who knows why people get on him, but I know it doesn't bother him at all, it's just one of those weird things."

Strasburg will get his next chance to change the narrative and prove that his health isn't an issue when he starts on Sunday afternoon.

Barring any issues, or setbacks, he's lined up to pitch in his hometown of San Diego in the series finale with the Padres.