With seven scoreless innings on the mound in San Diego, California's Petco Park, Washington Nationals' right-hander Max Scherzer lowered his ERA on the year to 1.75 after eight starts and 52 ⅔ innings pitched, over which he has a 2.04 FIP, eight walks (1.27 BB/9) and 66 Ks (10.48 K/9) after he added 11 strikeouts last night.

Scherzer retired the first ten Padres he faced before issuing a one-out walk to Will Venable in the fourth. Matt Kemp singled to center in the next at bat, but a foul tip strike three from Justin Upton got Scherzer the second out of the inning, and after a second walk to Yangervis Solarte loaded the bases, he popped Will Middlebrooks up with a first-pitch fastball to escape the first jam he found himself in.

"When it gets tight out there his emotions come out. You can see it on his face, you can see it in his mannerisms..." -Matt Williams on Max Scherzer's emotions on the mound

The Nationals' starter retired seven of the next eight batters he faced before Solarte doubled to start the seventh, and one out later, Alexi Amarista singled to put runners on the corners in what was then a 4-0 game.

Pinch hitter Derek Norris stepped in next, but Scherzer struck him out with a 96 mph 0-2 fastball. Abraham Almonte got more of the same, and Scherzer got the same result, K no.11 with a 96 mph 2-2 heater.

"'I always believe the last 15 pitches dictate how you feel about your start,'" Scherzer told reporters, including the Washington Post's James Wagner, after the Nats' 4-1 win.

"'Tonight, even though they were able to scratch a couple hits there . . . I was still able to pitch at my best. I still had my best fastball, my best stuff, even when I was approaching the end.'"

Scherzer left the game amped, fist-pumping after he recorded the final out of the seventh and stranded two Padres.

"He's just into the game," Nationals' manager Matt Williams said when asked about the emotional response from his 30-year-old starter.

"He threw his fastball when he needed to. The last hitter that he faced, he just dialed it up, best fastballs of the night." -Matt Williams on Max Scherzer finishing strong

"He wants to make pitches. He wants to keep his pitch count down, of course, so he can go deep into a game. When it gets tight out there his emotions come out. You can see it on his face, you can see it in his mannerisms, he understands how to pitch and how to get guys out. And when to just simply reach back and get a little extra. So, special."

As for what he did to escape the two tight situations he found himself in last night, Williams said it was all about the Scherzer's heater.

"It's the pitch that every pitcher controls best probably," Williams told reporters.

"He threw his fastball when he needed to. The last hitter that he faced, he just dialed it up, best fastballs of the night. So, he's got the ability to do that and reach back when he needs to."

"He pitches from 91-94 [mph] and then can reach back when he wants to and run it in there," Williams continued.

"More of the same from Max. Just was in control, ran into a couple of tough spots but made pitches when he needed to."

The Nationals jumped on Padres' starter Andrew Cashner early with a three-run first which snapped a streak of 21 consecutive home starts for the right-hander in which he allowed two earned runs or less.

Those three runs were all Scherzer needed.

"The story was sort of Scherzer for their end," Padres' skipper Bud Black said after the second straight loss to the Nationals.

"The way he threw against us, again, you look at Scherzer's track record, it's sort of low-walk, when he gets ahead in the count, the batting average against goes way down. So, again, with a guy like Scherzer, you're not going to score runs by getting walked by that fella. Fastball, slider and the change, good use of the change tonight, so a three-pitch mix for him. Again, fastballs at the top of the zone were effective. I think he dotted some fastballs also for called third strikes. But, it's not only his stuff, but he's sort of funky too now. The way he throws the ball is not a classic delivery. There's much deception in there, it's tough to pick up the ball."

Scherzer strikes out 11 in 4-1 win over Padres 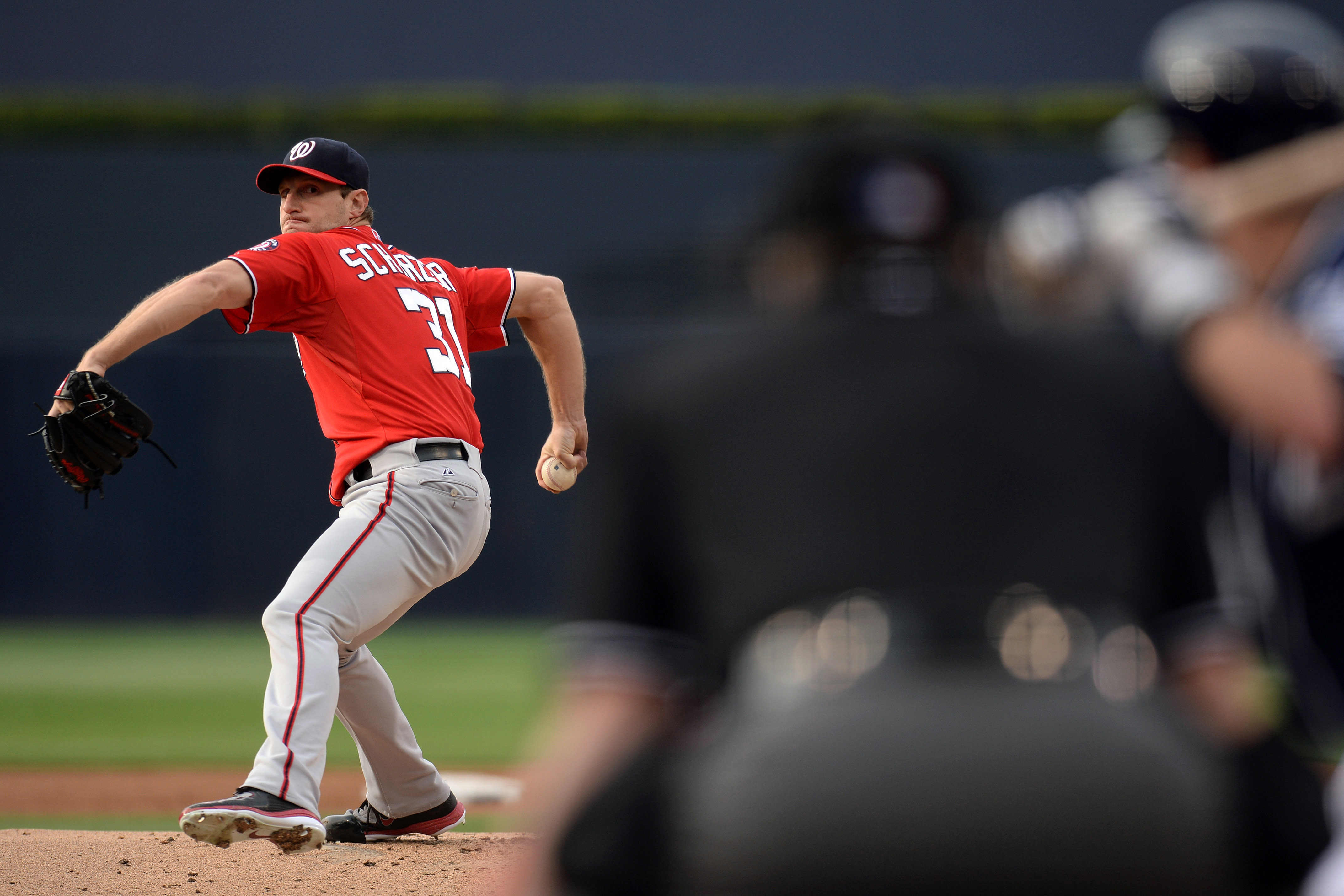 Black is right, of course, especially about what happens when you start down in the count to Scherzer.

Williams too pointed to Scherzer's ability to get ahead in counts, which he did with a variety of pitches, as one of the keys to the starter's success.

"Early breaking balls for strikes when he wants to," Williams said. "It's just he understands what he can and can't do.

"He's got a good plan going in there. When he runs into trouble he's got a plan to get out of it. And we saw that tonight in a couple of spots. More of the same. Really good pitcher."