Washington Nationals' slugger Bryce Harper finished the series in Petco Park 8 for 13 with a triple, two home runs, six RBIs and six walks in four games. The Nationals took 3 of 4 from the San Diego Padres as Harper converted more doubters...

With a 3 for 4 finale in San Diego's Petco Park, in which he walked, hit an RBI single, triple and opposite field home run, Washington Nationals' slugger Bryce Harper finished the four-game set with the San Diego Padres 8 for 13 with a triple, two home runs, six RBIs and six walks.

"He's taking a walk when it's offered to him and when he gets guys in scoring position, he's aggressive and he's waiting for a good pitch to hit..." -Matt Williams on Bryce Harper's success this season

About the only thing he didn't do, as the Nationals took three of four from the Padres, was hit for the cycle. But he tried.

In his final at bat on Sunday, Harper was a double away when he grounded out to first base to end the inning.

"You try to have a good AB and just try to put the ball in play and try to get on base," Harper told reporters after the Nats' 10-5 win.

But yes, he was aware that he was a two-base hit away.

"Of course you try to get that double, because that's a lot of fun, and you want to share that with your team and with the Nationals' organization, of course, but just happy we got the 'W' today and keep this going, hopefully, this week."

"There's no doubt he's swinging it as well as anybody in baseball," Black said. "It's awful tough. You try to do the best you can without laying one in there. Right now, he's seeing the ball so well that there's no weakness. You try to get a spot, and if you get there he seems to take it or foul it off. He's really, really swinging the [bat] well. He was on base a ton this series. He's in a really good spot right now."

"He's taking a walk when it's offered to him and when he gets guys in scoring position, he's aggressive and he's waiting for a good pitch to hit and that's the difference for any hitter, but somebody that's got his ability it makes a huge difference."

"It just gives opportunity to the guys around him," Williams said when asked about the run Harper is on this season.

"Granted, he hit one over the fence today, he hit a triple today, but it also gives opportunity to [Ryan Zimmerman] and to Wilson [Ramos] if he's on base. 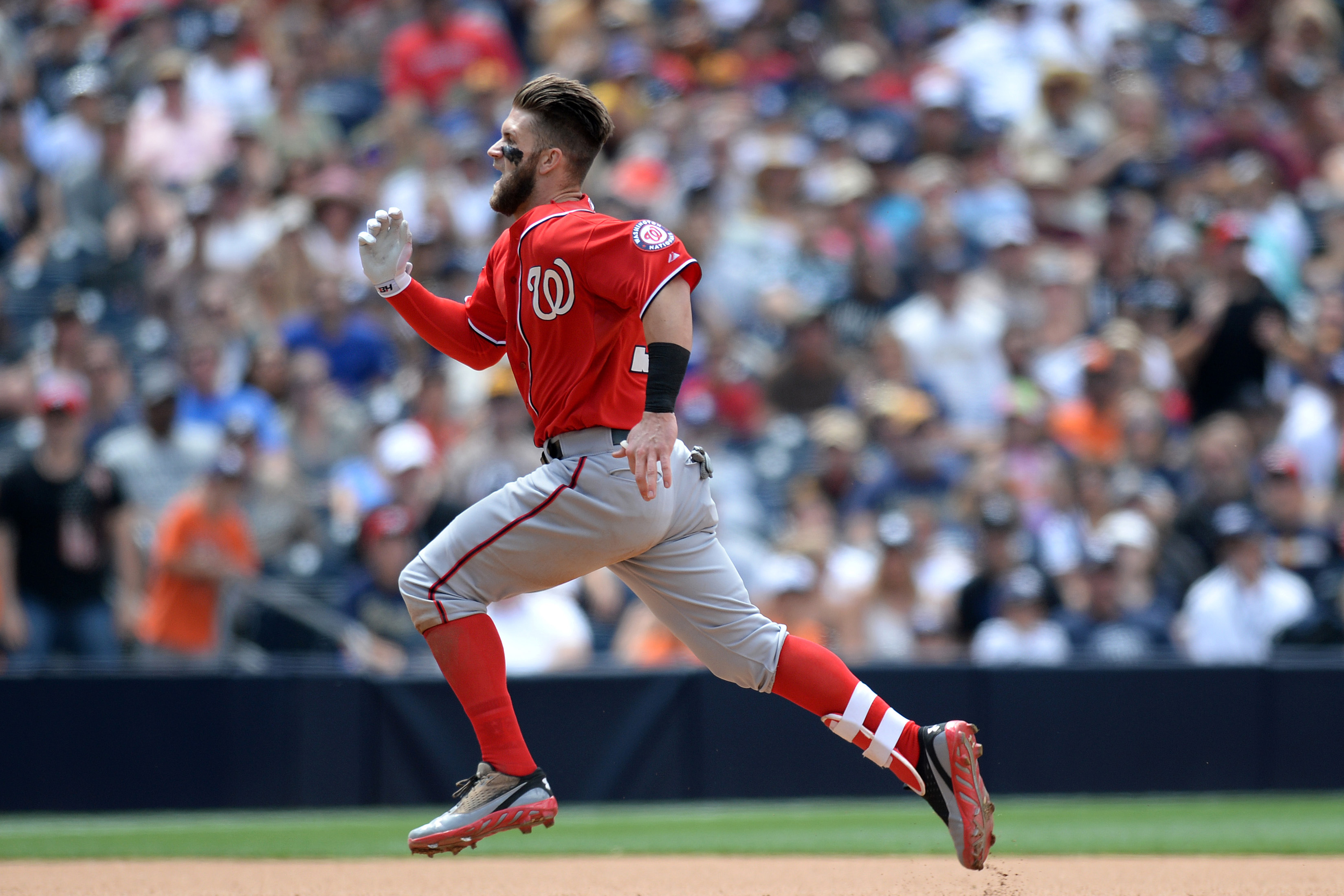 "That's what we want to be as a team. We want to have guys on the basepaths and have opportunities and he's providing us that when he doesn't hit it over the fence."

"It's due to our lineup," Harper said, pointing to his teammates as one of the reasons for his success.

"Having [Yunel] Escobar in front me, having Zim behind me, being able to go about my business every day the right way and stay in the lineup.

It's fun to watch too. Fun for everyone. Except opposing pitchers probably...