Nationals' starter Stephen Strasburg struggles again: "I think it's a test. It's a test for me."

Share All sharing options for: Nationals' starter Stephen Strasburg struggles again: "I think it's a test. It's a test for me."

Strasburg started out throwing 97 and locating his fastball on Saturday afternoon in the nation's capital, but a one-out walk to Ben Revere in the third started a series of events which led to the Philadelphia Phillies taking a 4-0 lead in what ended up an 8-1 win in which Strasburg failed to make it through the fourth.

"The base hit to Howard, a fastball up. The homer, was a fastball up. But still, with two strikes, just couldn't put them away today." -Matt Williams on Stephen Strasburg vs the Phillies

"The base hit to Howard, a fastball up," Nats' skipper Matt Williams said. "The homer, was a fastball up. But still, with two strikes, just couldn't put them away today."

"It doesn't happen all the time, but today it did," Williams said of Strasburg's inability to finish hitters off in the third.

"I know that he's out there throwing hard, good fastball again, early fastball command was there, just when he got them to two strikes he just couldn't put them away. So, that happens sometimes. Today was just outside the strike zone or up in the strike zone, or actually not throwing it where he wanted to with two strikes. It happens."

Strasburg was asked how it went awry so quickly when he seemed to be locating his pitches in the first two frames?

"I really don't know," he said. "I think I came out and I was pounding it good early and I then I just stopped hitting my spots for some reason."

"I just didn't execute. I just didn't make the pitches that I was trying to do. Just got to learn from it." -Stephen Strasburg on what went wrong vs Phillies

"The last outing was good," Williams said. "Early on this outing was good. Command was good. It was the difference between control and command and today when he was ahead in the count he wasn't able to do it. So, guys are good hitters, anybody who's got a bat in his hand is dangerous, and if you don't make your pitches then that can happen. It happened to Stephen today."

Williams called for Strasburg to attack hitters with his fastball and be aggressive in previous outings, and he was doing that on Saturday, but it just didn't work out

"He was aggressive early," the second-year skipper said.

It didn't get any better in the fourth. A double by Odubel Herrera, singles by Cole Hamels and Ben Revere, and an error on a grounder by Cesar Hernandez put the Phillies up 6-0 and ended Strasburg's outing.

"I just didn't execute," Strasburg said afterwards. "I just didn't make the pitches that I was trying to do. Just got to learn from it."

The prolonged struggle is something the 26-year-old right-hander hasn't experienced before, but as he explained, he sees it as a test.

"It's definitely something that I've never experienced before," he said, "and I think it's a test. It's a test for me. And I'm going to look at it that way and I'm not going to quit, I'm going to keep going."

He did, however, admit that it hasn't been easy. "Yeah, it's frustrating. I'm not pitching to my ability and just got to keep grinding."

Strasburg was clearly frustrated on the mound too, and on a few of the hits in the fourth, he failed to back up home on balls hit to the outfield with runners coming around. Williams definitely noticed. 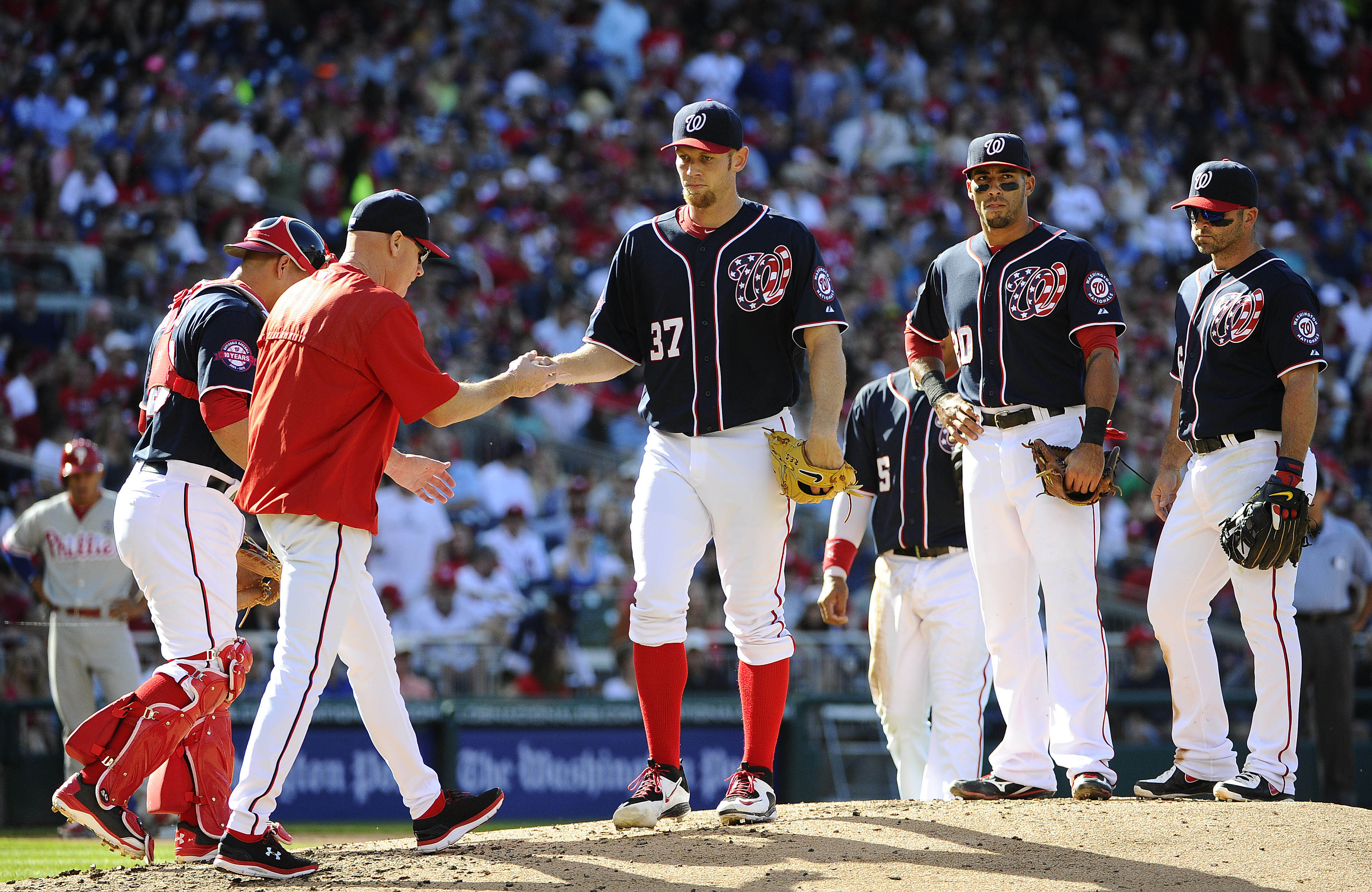 "Of course, yeah," he said. "That's worked on more than anything else and he's got to be in position in case something does get away.

"The one to [Wilson Ramos] that bounced, that he had in his glove and it flipped to the first base side we can't do anything about, but the other ones he can be in position to back up there, yeah."

There aren't, however, any plans to do anything drastic.

"We're not concerned," Williams said Saturday, after the Nats' six-game win streak was snapped with the loss. "He's one of our guys. He's been one of our guys and he'll continue to be one of our guys. He's going through a rough stretch, doesn't mean he can't come out of it his next start and be absolutely dominant. He has that capability every time he walks on the mound. So, he'll work hard till the next one and be ready to go. I'm not concerned about it. Everybody has issues sometimes and has a mini-slump, so the next opportunity for him is five days from now and you never know what might happen there, he may be really good."