Nationals' Jordan Zimmermann on start vs Cubs; wind in Wrigley

Three of the four home runs in last night's game got some help from the wind. The fourth, a solo shot by Chicago Cubs' rookie Kris Bryant, didn't need any help. Washington Nationals' starter Jordan Zimmermann talked about the wind in Wrigley...

Share All sharing options for: Nationals' Jordan Zimmermann on start vs Cubs; wind in Wrigley

Chicago Cubs' starter Kyle Hendricks held the Washington Nationals scoreless through six innings last night in Wrigley Field. Nats' starter Jordan Zimmermann gave up a home run in the first at bat of the bottom of the first, but managed to keep the Cubs in the park and off the board for the rest of his seven innings of work.

Zimmermann left with the game tied up at 1-1 after Bryce Harper homered in the top of the seventh inning taking a 3-1 sinker to left on a fly ball that just kept sailing until it reached the outfield seats.

"Wind's tough tonight. So any ball that gets elevated in the outfield has got a chance. We saw that." -Matt Williams on Jordan Zimmermann, wind in Wrigley

Judging by Harper's initial reaction on contact, the 22-year-old slugger thought he'd just missed one, but he managed to power it out and tie the game up, sparing Zimmermann a loss and extending his unbeaten streak to seven straight starts, over which the 29-year-old right-hander has put up a 2.35 ERA and a .260/.295/.324 line against in 46 IP.

Over his seven innings on the mound in Wrigley Field last night, Zimmermann walked three and gave up six hits, one of which made its way out on the wind that aided three of the four home runs that left the yard.

"Wind's tough tonight," Nats' skipper Matt Williams said, after what ended up a 3-2 loss. "So any ball that gets elevated in the outfield has got a chance. We saw that. But [Zimmermann] pitched well and gave us a chance to win."

The home run Zimmermann allowed, a solo blast by Cubs' leadoff man Dexter Fowler, came on a fly to right on the sixth of the 113 pitches he threw in the aptly-named "Windy City."

Two of the six hits, one of the three walks and the run he gave up came in the first, before the Nats' starter settled in.

"It was a battle tonight for sure," Zimmermann told reporters.

"Early on it wasn't really there, and then after the first couple of innings I started getting a feel and slider was good and I was able to break the curveball out late and get a few strikeouts when I needed to. It's a good lineup, I had to battle for sure, and obviously the homer was a little wind-aided, but it's going to happen when it's blowing out this hard."

"I don't think he felt he hit it as well as he wanted to," Williams said. "But it's Wrigley. It happens."

"Every fly ball that goes up, you hope it's not going to blow out," Zimmermann admitted.

"Every fly ball that goes up, you hope it's not going to blow out. I had a couple of close calls that were on the track, but you've just got to make your pitches..." -Jordan Zimmermann on the wind in Wrigley

"I had a couple of close calls that were on the track, but you've just got to make your pitches and if you give up home runs it's going to happen, you can't worry about that when you're out there."

After the Fowler home run in the first, Anthony Rizzo doubled and Miguel Montero walked with two out, but both runners were stranded. Zimmermann worked around a leadoff singles and two-out walks in the third and fourth and left a runner on second after a two-out double by Addison Russell in the seventh to hold the Cubs to one run.

"A couple of the pitches in the first were halfway decent pitches and [they] just got the bat on the ball," he said.

"I threw a slider in to Rizzo that it was probably on the corner and obviously I wanted to bounce it, but he's a good hitter and he pulled it down the line.

"You've just got to tip your hat when that happens, but for the most part I threw the ball well and was able to mix it up."

Harper's home run in the seventh tied it up at 1-1, and Denard Span's fifth home run, his second in two games in Chicago, put the Nationals up, but Cubs' rookie Kris Bryant made it a 2-2 game with solo home run to left off Nats' right-hander Aaron Barrett in the home-half of the eighth that didn't need any help from the wind.

The first home run Barrett allowed in 16 ⅔ IP this season came on a hanging slider Bryant bounced off the left field scoreboard for his seventh blast of the year. 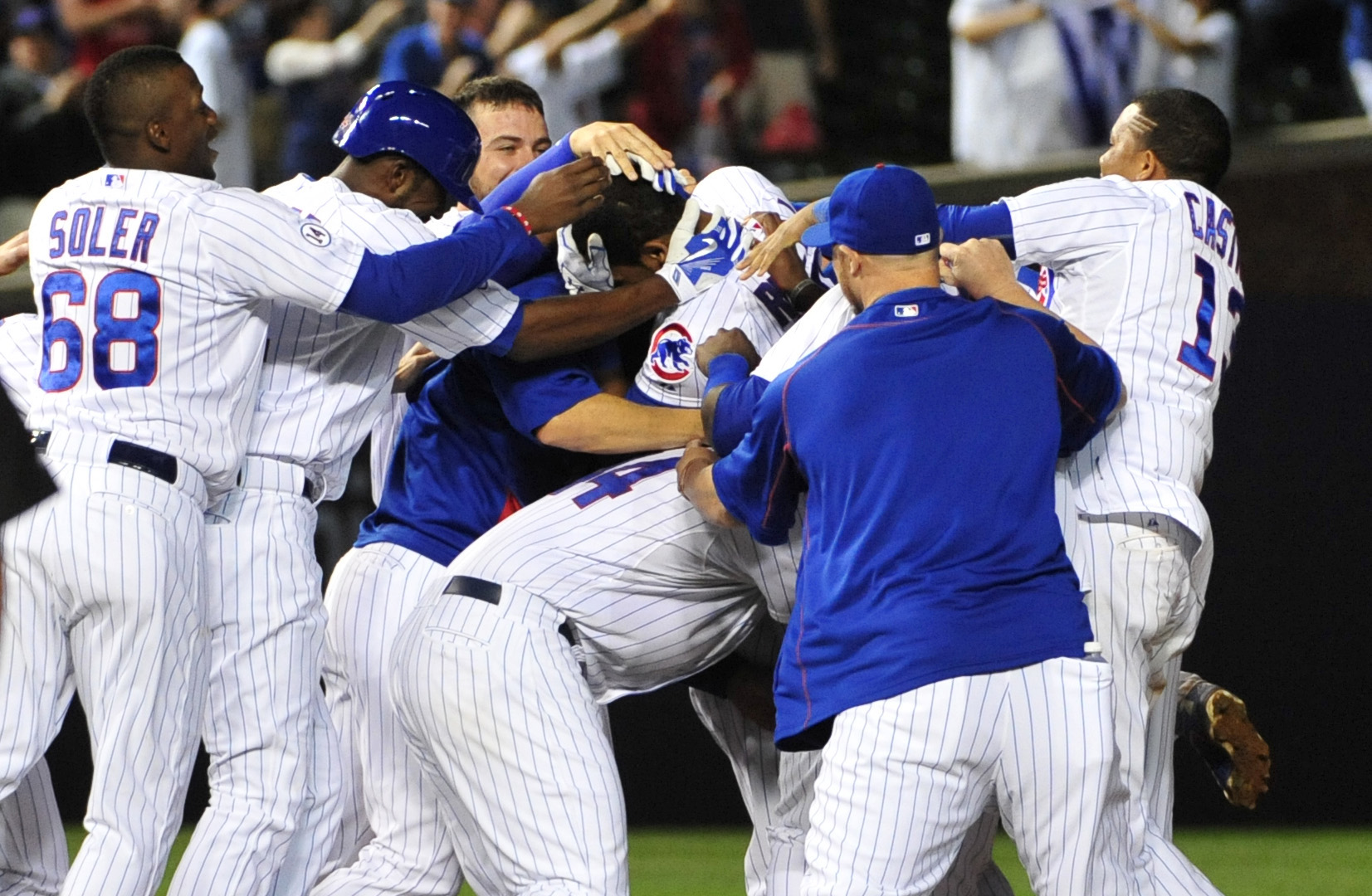 "He's taking advantage of mistakes, a couple of them in the first couple of games and he's not missing them. That's why he's such a high prospect for them and a very good player."

The Nationals came up empty in the top of the ninth inning, and Cubs' second baseman Addison Russell came through with the walk-off winner in the bottom of the ninth to give the Cubs a 3-2 win and set up tonight's rubber match in Wrigley.